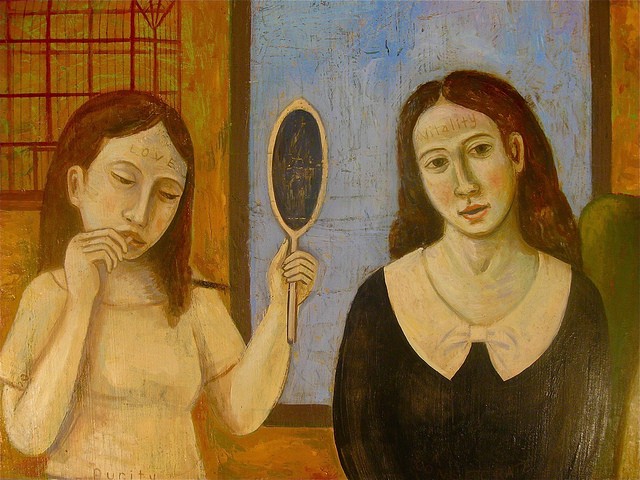 In October Rachel Held Evans completed her “year of biblical womanhood,” attempting to follow biblical doctrine specific to women as closely as possible.

This included referring to her husband as “master,” camping outside of her home during her period, refraining from gossip, and “caring for the poor.” Her upcoming book combines her experiences with her interviews with women about how they live according to their religious beliefs. Rachel Held Evans is a Christian blogger living in Tennessee.

Begin by describing why you decided on this project?
Growing up in evangelical culture, I always heard about the concept of biblical womanhood, but it means something different for everybody. For some people it means submitting to one’s husband, others say it is covering one’s head when you pray, or not taking jobs outside of the home. I hoped that by focusing on following the Levitical purity laws, that I might be able to help people cut themselves slack, because none of us are practicing biblical womanhood.

Do you wonder if women in abusive relationships that have been justified biblically will see your project as flippant, or playing at domination relationships? In the end, you haven’t had to risk much compared with many other women living in submission to their husbands.
You are right, I am definitely not taking real risks, but I can tell the story of people who risk a lot, and people who have overcome that. For a lot of women this is their story, the Bible being used to justify truly silencing them. I can’t reproduce certain experiences in my book, such as polygamy. I never experienced being sold for a bride price. There are clearly boundaries I couldn’t cross. The best I can do is to tell the story of women whose abuse has been justified biblically, so that people will be aware of the misogynistic, troubling parts of the Bible.

Of the biblical commandments to women that you chose to follow, what have been the most difficult commandments to keep?
Well, I broke some of them pretty willfully. There is one that says, “Thou shalt not teach in church.” I had opportunities to speak at churches, and I accepted these invitations. That is the commandment I probably broke the most. One commandment that draws a lot of attention involves covering my hair in prayer. Evangelicals are famous for randomly saying, “Let’s pray.” So I am always fumbling around for a hat or scarf, and everyone notices.

Interestingly, the easiest commandment for me has probably been the one about submitting to my husband. My husband and I have always tried to practice mutual submission. So it has been rewarding, prioritizing my husband’s needs over mine because he wants to do the same for me.

I devote a chapter of my book to different interpretations of submission, different ways the concept is interpreted. I talk about patriarchy and I also quote the more extreme folks who say submission means the husband makes all of your decisions. I don’t think the secular press knows how seriously these biblical passages are taken, or how often they are used to perpetuate abuse.

How would you describe your views on gender issues, would you call yourself a feminist?
That’s a tough one. In one way, I guess I am feminist. I believe women can hold positions of leadership, for example, or be in the work force and use their gifts. But my evangelical audience sees that as a bad word. I think feminism has been misunderstood, especially because a lot of evangelicals associate it with abortion. So “egalitarian” better communicates my position to my audience. – Tricia Gates Brown

To read the full version of this interview with Rachel Held Evans see the link here.