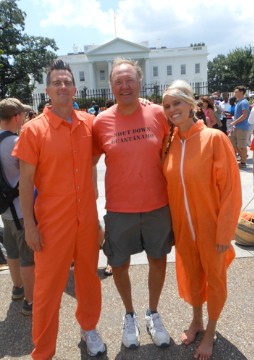 Lindsay and Tom Airey (left, right) dressed
in orange jumpsuits with members of the
Dorothy Day Catholic Worker house in
front of the White House to protest the treatment
of Guantanamo Bay prisoners, July 26, 2013.

On June 14, Tom and Lindsay Airey embarked on a 10-week road trip to “meet people whose lives of faith were compelling.”

Borrowing a friend’s Toyota Prius, the couple travelled from their home in Orange County, California to 17 states and two provinces. Their stops included The Mennonite Worker of Minneapolis, Jonah House in Baltimore, Maryland and The Simple Way in Philadelphia. In Winnipeg, Manitoba the couple attended a course taught by activist theologian Ched Myers and conflict transformation teacher Elaine Enns at the Canadian School of Peacebuilding.

At the end of their trip, Tom summed up what they learned from those they visited with a list of 10 characteristics of radical discipleship communities. You can check them out and read more details about Tom and Lindsay’s trip at radicalroadtrip2013.blogspot.ca.