Salvage the sermon, for the end is near 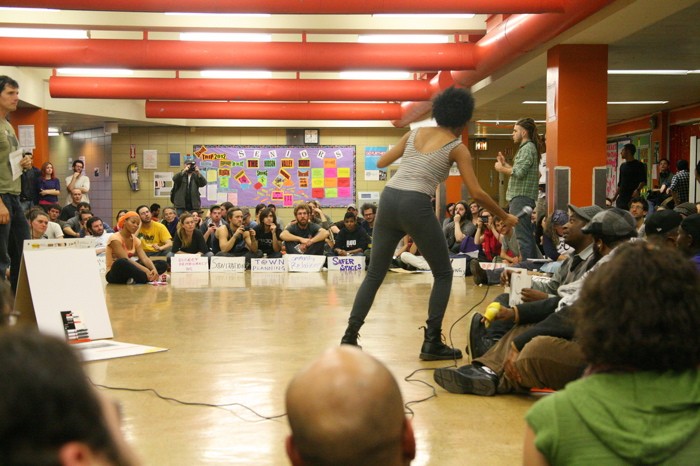 The first Operational Spokes Council meeting, at Murray Bergtraum High School. 15 groups were agreed upon to be part of this council. Credit: Brennan Cavanaugh, http://www.flickr.com/photos/brecav/6648267863/

We can all recite the classic set of accusations against them: they’re boring, irrelevant, hierarchical and patriarchal. That’s all very well and true. But to be frank – perhaps even hysterical – there’s just not enough time to be throwing more redundant complaints onto the massive pile. Jared Diamond, geography professor at UCLA and Pulitzer Prize-winning writer of Guns, Germs, and Steel noted in his book Collapse that we’re currently facing a dozen urgent ecological issues, including deforestation, overfishing, climate change and energy shortages.

We’ve got two oversimplified options at this point: either harness the sermon as a mobilizer of the masses to imagine a new way of living as Hairless Great Apes, or abandon the whole method and create a radically new way of teaching and learning. Rambling about Joel Osteen and Mark Driscoll over pints of craft beer at the local pub, while a valid activity in theory, just isn’t enough. Sermons exist. Osteen and Driscoll aren’t going anywhere. Let’s either salvage or sabotage the practice.

Carol Meyer has selected the former option. Meyer is the executive director of the Sustainable Sanctuary Coalition, a small non-profit located in Mission, Kansas, that encourages local religious parishes to consider ecological viability. She promotes a trio of efforts: organizing “green teams” (committees dedicated to organizing actions, like planting community gardens), altering buildings to make them more sustainable (recycling and installing solar panels are two examples) and helping leaders and attendees make the connection between spirituality and ecology.

“To me, if any group of people ought to be doing this, it ought to be people of faith who say they believe in God, a higher value, love, social justice and caring for the poor,” Meyer says. “All of this relates to that. If we say it’s God’s creation, my gosh, shouldn’t they be the first ones out there to do something about it? We know that if a congregation gets on board, that’s a lot of people. That’s a lot of bodies, a lot of enthusiasm, commitment and work. That’s a big power base.”

A recent initiative from the Sustainable Sanctuary Coalition has been the 100 Sermons for the Earth challenge. They called on congregations in the Kansas City area to focus at least one sermon in 2013 on the ecological system that we’re all a part of. Meyer reports that around 70 congregations made the commitment. The coalition provided a 26-page resource to each of the parishes, filled with scripture passages, related quotes, prayers for different parts of the service and ideas for celebrating Earth Day.

“If all the people in those congregations heard their pastors saying this is an important duty and let’s get on the ball, that’s a lot of people who are at least one step closer to doing something,” Meyer notes. “When a message comes from a trusted person of authority, it is much better received than from ordinary people, so go to the channels that people already trust. Well, if they don’t trust their minister, who are they going to trust?”

Back in July, Meyer wrote a blog post titled “Don’t Underestimate Mother Nature! In a Fight, She Always Wins.” In it, she said the ecological crisis stems from an arrogance borne from a “patriarchal mentality, dismissing the Earth as a powerless feminine reality.” Obviously, a half-hour chat every Earth Day isn’t going to suffice in undoing that twisted legacy. Meyer doesn’t pretend that sermons are the answer. But to her, it’s a start and a valuable tool not yet worth dispensing of.

It’s the possibility of changing paradigms that’s kept Robert Jensen attending St. Andrew’s Presbyterian Church in Austin, Texas. Jensen is a journalism professor at the University of Texas and the author of several books including, We Are All Apocalyptic Now, Getting Off: Pornography and the End of Masculinity and The Heart of Whiteness. He rejects the supernatural claims of Christianity but holds enormous respect for the subversive narratives within the tradition. He’s also a very part-time preacher at his congregation, filling in during summer holidays.

“I tend to want to challenge people as intensely as possible,” says Jensen about his preaching style. “I remember I did a sermon once called ‘Hope is for the Weak.’ I wanted to make the point that a lot of times when you present a critique of the existing system and how dire our situation is, people say that ‘we have to have hope.’ I think often what they mean by hope is ‘Well, let’s not take any of this too seriously, let’s pretend everything’s going to be alright in the long run anyway.’ And there’s no guarantee that everything’s going to be ok in the long run.”

Jensen occupies the grey area between the options of either ditching or retaining the sermon. Some leaders – John Dominic Crossan and Bishop John Shelby Spong, for example – represent what Jensen describes as a “questioning, skeptical, intellectually honest Christianity.” They carry forth the tradition of prophetic and apocalyptic preaching that counters the “royal consciousness” of the day (to borrow a phrase Walter Brueggemann). Such leaders are few and far between, but do indeed exist.

There’s also a particular language that’s unique to the religious tradition that Jensen appreciates, and attempts to reappropriate for subversive ends. The phrase “fire and brimstone” has historically been used to reference the fiery doom awaiting those who commit a wide assortment of moral failures. But Jensen sees “fire and brimstone” being reimagined in sermons to challenge faulty, anthropocentric systems. To him, it’s not the Wall Street trader that’s necessarily sinful, but the system that encourages sin (greed, cheating, lying) that’s to blame.

“In a deeper sense, this concept of sin – that we as human beings are capable of falling out of right relation with ourselves, with each other and the larger world – is a very useful concept,” Jensen says. “It reminds us that we are a kind of fallen species. Our cognitive abilities that have allowed us to do so many amazing things also allow us to do a lot of really nasty things. That’s the human dilemma.”

A few years ago, Mark Van Steenwyk – then a seminarian at Bethel University in St. Paul, Minnesota – was invited to preach a sermon at a church that gathered in an amusement park located in the Mall of America. This was long before he’d authored the books That Holy Anarchist and The Unkingdom of God. Scheduling a known anarchist to speak about the Sermon on the Mount in the largest shopping centre in the country might have alerted the invitees to the inevitable outcome.

The church had endowed his presentation with the name of “How to Love Difficult People,” a fact that Van Steenwyk only discovered upon arrival to the venue. The title of the sermon that he had prepared was “How to Love Osama bin Laden.” Needless to say, the gist of the presentation angered most of the congregation. One of the elders was an active member in the U.S. army, and assured that Van Steenwyk would never come back. But a few attendees approached him – “conspiratorially” in Van Steenwyk’s words – after the talk to express gratitude for the anti-imperialist message.

“That was a sermon that did something, because nobody was expecting that and it disarmed them, and it got them to think,” says Van Steenwyk, who is a founder and member of the Mennonite Worker intentional community and the editor of JesusRadicals.com. “If you can offend people without being a dick about it, that’s one way. That seems to be Jesus’s MO, so I feel like I can do that.”

But Van Steenwyk has an advantage over most pastors – he’s ultimately a guest speaker, which allows him to take liberties that full-time leaders would likely incite church splits with. He gives the example of Greg Boyd, the pastor of the nearby megachurch Woodland Hill Church. Boyd once preached a series about the traditional Anabaptist value of pacifism. By the time that Boyd finished the series, 1,000 people – a full quarter of the congregation – had left.

“I’ve taught seminary courses, I’ve preached in large churches and small churches and I’ve spoken in drug rehabilitation programs,” van Steenywyk says. “And by far, the most receptive audience I’ve ever had consistently is men in recovery programs. I just think that maybe instead of trying to reach out to educated, middle-class people with radical messages, we should just take a page out of the Jesus playbook and say ‘Look, there’s all kinds of potential audiences for radical messages among people who are not going to give me any money, not going to be buying any books and are not going to be interested in celebrity.”

The future’s looking pretty bleak. Dozens of authors have spent great portions of their careers pointing this out – the likes of Vandana Shiva, Arundhati Roy, Derrick Jensen, Chris Hedges and Naomi Klein have all excelled in this role. That argument’s non-negotiable. Western civilization is collapsing as petroleum, water, forest and precious metals plummet in availability. Desperate measures for desperate times are being employed. Everything’s been tried.

But just like it’s not enough to complain about the sermon, it’s not sufficient to memorize a list of all the woes of the world. Can we perhaps bring the two together? At least three people are already doing it: Carol Meyer, Robert Jensen and Mark Van Steenwyk. Maybe the sermon can be salvaged, and the future of our species – and all the other species we influence – can be too. Here’s hoping.

James Wilt is an associate editor of Geez. He’s a regular contributor to Fast Forward Weekly in Calgary, Alberta and a professional coffee server.