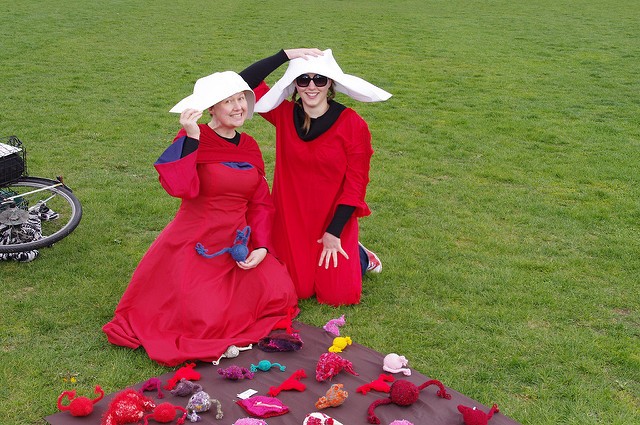 Prior to the action in an Ohio senate building (see story below), Radical Handmaids in Canada (depicted here in a 2012 Parliament Hill action in Ottawa) began in opposition to a review of abortion legislation. Inspired by Margaret Atwood’s classic tale, they “fight under the banner of Handmaids who will not sit by idly while Canada descends into Gilead.” They connect via Facebook and radicalhandmaids.com. Credit: Jenn Farr, see link below.

Sixteen women in Ohio appeared in the state’s senate building June 13 dressed as handmaids in protest of a bill that would limit access to women’s health.

If passed, Senate Bill 145 would prohibit doctors in the state from performing a specific abortion procedure known as dilation and evacuation.

Protestors appeared in and around the statehouse wearing red capes and white bonnets, reminiscent of the 1985 dystopian novel The Handmaid’s Tale, by Margaret Atwood. Women in the novel have no social or civil rights and are treated mostly as vessels for growing children. The book has recently been turned into a miniseries, increasing its popularity.

Protestors were silent during the demonstration, and no police action was taken against them.

“Today’s handmaid protestors are here to show the members of the Ohio legislature that Ohio women are done being silently restricted in what they may choose for their own health care,” said Jaime Miracle, NARAL Pro-Choice Ohio deputy director.