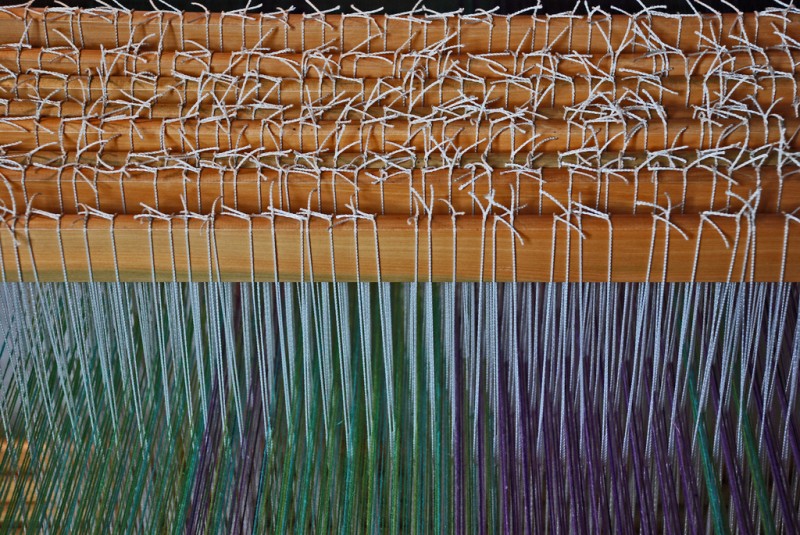 Thirty nine weeks: My loom intimidates me but I’m spending more sweaty afternoons leaned over it, pulling each warp thread through its own heddle, one-two-three-four, four-three-two-one, until each one is tied.

There is an urgency to the slowness of it.

Forty weeks: Birthing From Within, a natural birth bible I am devoted to, suggests having a project to keep you busy during the early parts of labour. As my belly gets heavier, I drift into a state of heightened preparation, determined to finish the warp in time. Sitting up to take a break, I notice a spot of milk on my shirt. It probably means you’ll have a good supply once the baby finally comes, my friend texts back.

Forty weeks and four days: Suddenly I shudder and feel it pop. Five centimeters: I remember asking my midwife why, so many hours later, I could still feel gushing. God said to Job: “Who shut in the sea with doors when it burst out from the womb?” I smelled it when it first broke. I’d heard it smells like the ocean.

Three days: It could have happened any time during the birth, the neurologist told us. Are you praying people? he asked.

One week: I begin to think of what happened as a natural disaster, a tsunami that swept through my baby’s mind. Everywhere, all the time, waves.

Three months: It is a cold, dim winter afternoon, pink sky. The baby is napping cozily as I finally cut the birth weaving from the loom, two feet of unbleached wool with a single line of cochineal thrown in at each contraction. I wonder if I recorded when my baby’s injury happened. I gave birth naturally; I used to call myself a nature lover. It all smacks of uncontrollableness, but that’s not true. What is true is that indigo is achieved by dipping cloth into a vat deprived of oxygen, a womb like mine, turning beautiful blues at first breath, and that I want to make my baby a blue carrier. My friend, a Minnesota farmer, has offered me her land to grow some indigo this summer and a master indigo dyer based in Indiana has invited me to his studio so that I can learn more about the materials and process. Unmoored, following the poetics of these small gestures grounds me more than any theodicy could.

The fibershed movement asks where your garment is grown, harvested, milled, dyed, sewn, and sold. Started by Rebecca Burgess, who set out to create a wardrobe sourced entirely within a 100-mile radius of her home, fibershed is a direct challenge to the fast-fashion industry, notorious for horrendous labour practices and second only to oil in pollution. It serves as my ethical compass when I weave and quilt, utilizing Midwest materials whenever possible, or choosing materials that respect the resources and labour of the global textile industry, knowing that 100 miles radiate out from wherever anyone stands.

Job demanded an explanation for his suffering from God, who responded with long-winded descriptions of creation’s complexities like, “Who shut in the sea with doors when it burst from the womb?” Who, indeed, made my waters unsafe? On a bad day, I tried giving my loom away, unsuccessfully. I’m glad I didn’t because I’m starting to see how I need the concreteness of weaving, from “soil to skin,” to even entertain the cosmic problem of innocent suffering. The birthplace of cloth grounds me in my place, demanding labour I hope will carry us through.

Allison Ellingson is an artist, writer, mother, and pastor’s wife from Chicago. She has an MFA (School of the Art Institute of Chicago) and an MDiv (McCormick Theological Seminary). Her art and life are committed to being suspicious of frames, and to revealing and revelling in what they leave out.