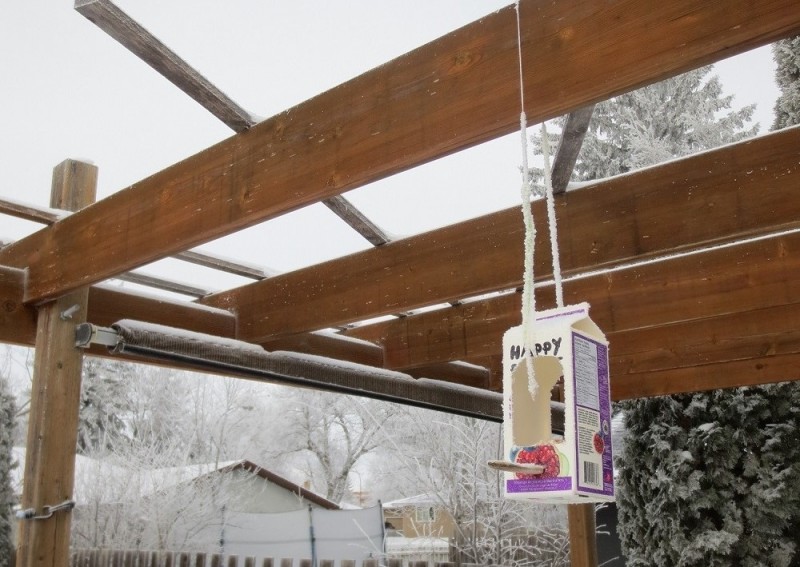 “Birding,” or bird-watching, is an activity I have started to enjoy over the past couple of years.

While living on the West Coast I kept my eyes out for pileated woodpeckers, ruby-throated hummingbirds, and northern flickers. Eagles were my favourite sighting. Although they’re common on the coast, they’re very impressive. Their wingspans had me repeatedly mistaking them for planes.

We’ve returned to the prairies and this past fall I spotted chickadees, juncos, a red-breasted nuthatch, and either a downy or hairy woodpecker (it’s hard to tell). I put up some homemade birdfeeders in December, hoping to coax some of these birds to our yard. They were nothing special, just peanut butter spread over a fir cone, and a juice carton filled with seeds with a wooden spoon for a perch.

As I crunched through in the snow, grabbed a plastic chair to stand on and hung the feeders – one on a tree and the other on pergola slats – I felt a number of things: cold, embarrassed that I didn’t have fancier feeders, and kind of silly. Would this even work? What bird would want to come to this weird-looking thing?

I also wondered if putting out bird feeders would just help non-native invasive species, like house sparrows? Wanting to shake the feeling that I’d just done something stupid, I called my friend Jason Unruh, who just completed his MSc at the University of Regina, studying the effects of the oil industry on grassland birds.

It was a quick conversation because Jason’s daughter’s birthday party was going on, but he assured me that he has feeders in his yard that he typically puts out in the winter, when foraging for food is more difficult.

“What you want to consider is the way different birds feed. Sparrows need a perch, whereas juncos need a platform feeder because they eat on the ground.”

“My platform feeder is just a two-foot plywood square I built that hangs from a stand with a hook. As for food, black sunflower seeds are great. Pieces of fruit work, too. I make my own suet by saving all my bacon fat, storing it, and mixing two parts fat with one part peanut butter and birdseed. Some people do peanuts or oats. If you want to see woodpeckers or nuthatches, you can just spread the suet on the limbs of trees. I save my old Christmas trees, cut them up, drill holes in them, stuff the suet in the holes, and then hang them up. Chickadees like them, too. Heck, you can just throw seed on the ground, even in the snow, and birds will come.”

My faith was restored. I should have believed in myself a bit more, or in the birds. My embarrassment at putting up such simple feeders was followed by embarrassment at being anxious about it. I could have just thrown seeds on the snow. But my trepidation was more about wanting to help out in the best way, to show the birds I’m not some ignorant humanoid who thinks she’s helping when she’s really messing things up even more.

Birds don’t care if your heart’s in the right place. I’m learning that studying birds is like putting your finger on the pulse of the earth. If things are good, the birds stick around, if they’re not, the landscape becomes more silent.

If anything, I’d like my feeders to be a sign of welcome to creatures I’m getting to know.

Katie Doke Sawatzky is the Experiments editor for Geez. Contact her with ideas or feedback at experiments@geezmagazine.org.