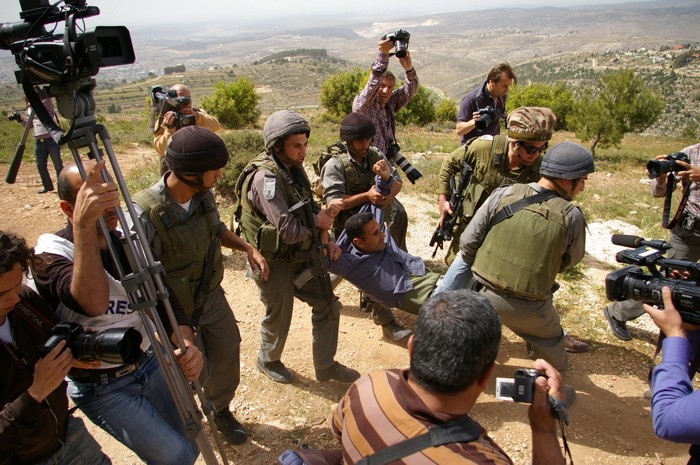 It is nearly noon in Al Ma’sara, a village south of Bethlehem in the occupied territories of Palestine.

The village’s Muslim inhabitants have finished Friday prayers and many have gone home to rest or chat with neighbours and friends. Friday ought to be a peaceful time, but a line of some 30 Israeli soldiers in battle gear and a handful of Israeli police on the main road of Al Ma’sara dispel any notion of peace. They are present as a reminder that the Israeli military, not the villagers, are in charge of day-to-day affairs. Facing the soldiers is a cluster of unarmed villagers, Israeli leftists, and internationals, there to make their own point.

Hassan Beijiyya strides between the troops and civilians, bellowing slogans in unmistakeable defiance of the soldiers, and the occupation. Hassan, who coordinates the National Grass Roots Resistance Committee, sounds like a 1930s-vintage labour organizer, all fire and determination. By the end of the hour-long demonstration, his voice is croaking, hoarse. He is exultant.

Demonstrations pop up every Friday in the occupied territories of Palestine. Some are large, like those in the cities of Nablus or Ramallah. Some are smaller, like the demonstrations in Sheikh Jarrah in Quds (Jerusalem) and in Al Ma’sara. The courageous and tenacious Women in Black hold silent vigil in Israeli West Jerusalem. And all of these fail because the Israeli conquest of Palestine has not been slowed one iota. Yet, despite their apparent ineffectiveness, the demonstrations in Al Ma’sara succeed in revealing to the world the absurdity of Israel’s occupation.

Today, a scant two weeks after the worst winter storm to hit Palestine and Israel in over 60 years, Hassan and his colleagues are presented with a unique creative opportunity. The demonstrators start making snow- balls as the soldiers look on, perplexed and anxious. It takes dozens of snowballs, all carefully carried to the bare pavement in front of the soldiers, to spell out salam (Peace) in Arabic. When they are done, two children stand for a photo op, holding a Palestinian national flag and a sign, one dressed in a red Santa’s elf suit. Over a dozen photographers and videographers capture the moment. Their point is made, and it will be made all over the internet within hours. 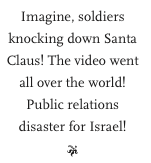 “In 2006, we had someone dressed as Santa Claus,” he enthuses. “And the soldiers knocked him down! Imagine, soldiers knocking down Santa Claus! The video went all over the world! Public relations disaster for Israel!”

A few weeks before today’s demonstration, Hassan and company abruptly changed the venue to a traffic circle by the settlers-only highway between Al Ma’sara and the village of Al Khader.

“We have 15 minutes!” Hassan announced, standing in the centre of the traffic circle. Hassan and his brother began demonstrating in plain sight of Israeli settlers driving to and from the illegal settlements of Efrat and Tekoa. He was right: a squad of armed soldiers appeared about 15 minutes later to clear the Palestinians and internationals from the area.

Keeping the Israeli military off balance is part of the villagers’ strategy. Being creative and determinedly non-violent is just as important. Someday, in’shallah (God willing), the occupation will be history and Palestine will be free. Until that time, the villagers of Al Ma’sara will fail and fail again, as creatively as possible.

Peter Fergus-Moore is a retired adult literacy instructor who spent three months as a human rights monitor and protective presence in Palestine. Literally nothing in his life has turned out the way he expected, and therefore he has utterly failed to fulfill his dreams. He couldn’t be happier as a result.