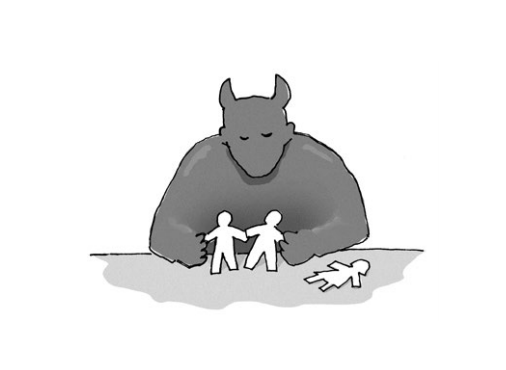 “I went … back and forth between affirming and non-affirming, like I was on a confusing gay Christian carousel.”

I was born in Quezon City, Philippines, to Pentecostal missionaries. According to family lore, I stopped breathing after I was born and started turning blue. Jumping into action, my dad prayed for me, and I started breathing again. See, Satan was trying to get me from an early age, but my parents were spiritual warriors and they would never allow that to happen.

Protecting me and my siblings from Satan was apparently a very involved task for my parents. You never knew when Satan was going to pop out and get you. Harry Potter, for example, was basically a Trojan Horse for Satan.

I would later learn that Satan had control over an obscene number of things: secular music, Pokémon, the New Jersey Devils, evolution as a concept, Furbies, Palestine, totem poles, climate change literature, all Muslims, the Democratic Party of the United States, and the list went on and on.

Of course, there was one thing Satan had ultimate control over – one thing that was not talked about, except in warnings and condemnations. I found out what it was while watching a Christian documentary on TV. During this documentary, I saw two men kiss during a pride parade. As the narrator droned on about how evil this was, I froze, because deep inside me, a thought that had been percolating for a long time suddenly crystallized. “The gays” were my people. I was one of them. And according to this documentary, people like me were being smote by God with AIDS for their wickedness.

This was not the future I was taught to believe in as a young teenager. As the son of Christian ministers, I was told God had a plan for my life that was beautiful and bright, a plan that did not include sexually transmitted diseases as punishment for existing or total ostracization from Christian society. I breathed conservatism in the way a fish breathes water. Hope was my oxygen, and for me, hope existed in the teachings of my family and church. With hope gone, I started to drown.

We lived about a hundred metres from the beach. Sometimes, I thought about tying a rock to my leg and tossing it off the pier. Matthew 18:6 said it: “If anyone causes one of these little ones – those who believe in me – to stumble, it would be better for them to have a large millstone hung around their neck and to be drowned in the depths of the sea.”

Since my demise was biblical, I didn’t think anyone would be sad. By the time I was 15, my mom had already tried to cast a demon out of me. My dad told me he would never accept me as gay. If God’s punishment for boys like me was AIDS and a slow death alone in a hospital bed, what difference did it make if I chose my own way out before it happened?

There was one thing that stopped me. I was afraid of Hell. It was hot, it was real, and I was born with a one way, non-refundable ticket written on my chemistry. I made a resolution. I’ll stay on Earth so I can stay out of Hell for as long as possible. And for a while, that horrific spectre motivated my decision-making. At some point, I decided I would like to stay alive. It was not one moment, but rather a slow build up of events: The sticker on our glass door that said “God Loves Me,” that preached to me as much as it taunted me; the thought of a future career in the film industry; seeing LGBT people in media. At some point, my spirits lifted and I decided if I had to fight for the right to breathe in this world, I would.

I started researching what the Bible said about homosexuality. Through the internet, I discovered a moving, active world of people who were engaging with this topic in ways that thrilled my young spirit. One person was Misty Irons, an American conservative Christian blogger, who blogged on why the church needed to be more accepting of gay people and why same-sex marriage ought to be legalized as a civil right, even though this ostracized her and her husband from their own denomination. Even though she believed in celibacy for gay people, she was more progressive on the topic than anything I had ever heard growing up. Discovering her writing gave me fresh hope.

There were many more people and organizations I discovered. Soulforce, an American interfaith organization, fought to end the oppression of LGBTQ people at the hands of the Christian church. In Canada, there was Wendy Gritter and New Directions. At one point, her organization had been part of an ex-gay ministry. If she could change, maybe the world was heading down a brighter path than I had thought.

And, perhaps most importantly, in Australia, there was freedom2b, another Christian organization that sought to repair the damage done by the Christian church towards the gay community. Since their time zone lined up nicely with mine in the Philippines, this organization was the easiest for me to communicate with. The connections I made with them sustained me throughout adolescence. I owe a lot to these online resources and forums. It took me years to sort through evangelical baggage and work out my belief system. I went through numerous iterations, going back and forth between affirming and non-affirming, like I was on a confusing gay Christian carousel. Over time though, I became sure of myself. The ride broke down in the face of my certainty, and I placed my feet on land. I had arrived. And I was alive.

Bryan Sandberg is a 25-year-old writer based in Calgary. His passion is writing stories which explore and celebrate minority experiences. He graduated from Trinity Western University with a BA in Communications. While at university, he co-founded OneTWU, a community group for LGBTQ and straight allies.