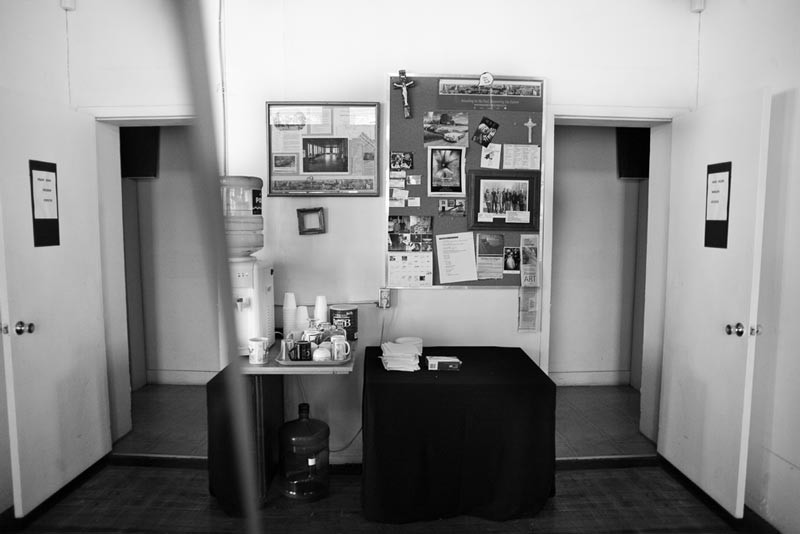 In societies where modern conditions of production prevail, all of life presents itself as an immense accumulation of spectacles. . . . In the spectacle, which is the image of the ruling economy, the goal is nothing, development everything. The spectacle aims at nothing other than itself. – Guy Debord, Society of the Spectacle

A church is a recognition, in stone and wood and brick, of spiritual awakenings. – Margaret Visser, The Geometry of Love

I began my psychological excursion by avoiding the facts. I entered a series of empty sanctuaries, found a seat, laid aside notebook and pen for a few slow breaths, and let the space impinge upon my consciousness.

The experiment was inspired by the Situationists, Marxist radicals who wandered the streets of Paris in the 1960s observing the ways their constructed environment coaxed, curbed or corralled their behaviour. They sought alternative experiences to those prepackaged for them by a capitalist economy. Setting aside both work and leisure, they wandered. They called these deliberate drifts dérives.

In the spirit of the dérive, I planned visits to six Winnipeg churches from different eras, built in different styles. I tried to accumulate as few facts as possible before I went. I didn’t want dates, doctrines, attendance numbers, baptismal rituals or beliefs about the Tribulation to hinder the intuitions of my right brain. I knew I could count on my left to rifle through the particulars later. I carried only a notebook and two important questions: How does this space make me feel? And, what kind of god might I meet here?

To allow you, my reader, to accompany me unencumbered on this excursion, I won’t supply the names and denominations of these churches until later. Because a church, as Margaret Visser says, is there “to teach you to pay attention, and to awaken the poetry in your soul.” Cross yourself with a drop of holy water; this route may have unexpected corners.

The throne room
The arch over the dais keeps rising, like a pole vaulter tossed gaspingly high. Under the ceiling’s curved wooden ribs you feel sheltered by the inverted hull of a colossal ship. Ceiling fans the size of asterisks wink among the rafters. You find a place to sit, but your neck aches from the presence of so much space, so you back up to the rearmost pew. Even here it hurts to look up, but it’s impossible to look down. Jesus, severe and radiant in stained glass, gazes from imperial height. You are miniscule in the eyes of His Great and Terrible Majesty.

The church was built 60 years ago to “convey the experience of the transcendent, the Almighty, the bigger-than-you-can-imagine,” says the rector. “The theology of that time was, ‘We’re small, we’re not worthy to accept crumbs from the table.’” Steel girders hidden behind the wooden ceiling made it possible to construct a vault large enough to shelter 1,200 faithful without the support of pillars. These days, five congregations – none larger than 200 – and a handful of community organizations share the extravagant space. The church has drawn up plans to turn the sanctuary into apartments for new immigrants.

The grotto
The exterior of this edifice looks more like a dropped waffle cone than a church. A man at the front desk tells you to walk right on in. The interior is dim, cavelike and mildly musty. Light drips from somewhere onto a limestone altar draped in white. Behind it levitates a carven Christ. You look up, searching for an aperture, but the warped cone cleverly conceals the source of illumination from every angle. You can’t imagine what force twisted the mighty wooden rafters that draw your gaze into a bright vortex. Next to the door, Jesus strikes a portrait pose. His luxuriant locks suggest a shampoo ad. His nightgown is downright sexy. Rays of light burst from his chest. You are enchanted, seduced. God must be a whirling dervish whose feet (if she has them) never touch the floor – your mysterious companion without a name.

The lecture hall
The benches are plum-coloured plush and smell of citrus cleaning agent. The light is ambient. The acoustics are clear as glass. Twelve hundred seats slope towards the stage, whose centerpiece, a pulpit of transparent plexiglass, stands poised on a peninsula. Walls and ceilings are a modest Protestant white. Every corner is a line. Not a curve in sight; nothing to distract the eye or ear from the message. This God wears a plain tie and preaches three-point sermons backed by the Word. Your mind swells with new knowledge. You take notes until your wrist is sore and catalogue it in your library of truth. The teacher approves. 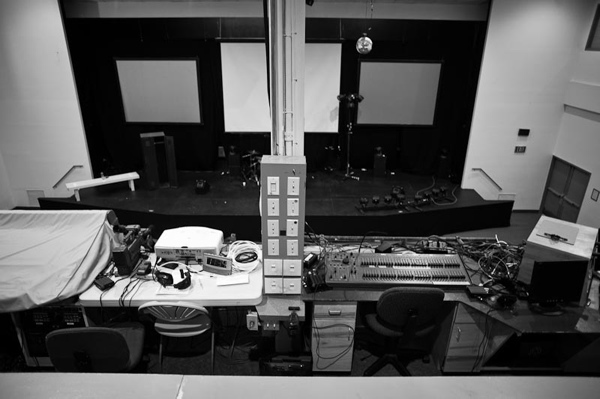 The theatre
“It used to be a nightclub,” says one of the pastors, casual in his jaunty shorts. A disco ball still glitters up among the stage lights. The best view is from the balcony. “Art is really important to us,” he says. His comment seems incongruous in this cubic, colourless auditorium. Even the windows are blocked to keep sunlight from interfering with the show. Not a mural, icon or banner in sight. This space is at its best, you realize, with the lights down, illuminated by a flashing screen. Every sermon comes with a larger-than-life illustration to keep the crowd’s attention, says the pastor. They’ve had cars on the stage,

motorcycles and a six-foot “baked potato” with a pat of fake butter on top and real steam billowing from fissures in the tin foil. A full-time media producer shoots weekly videos to enhance the sermons and advertise events. By now you’re craving buttered popcorn. God snuggles close for a kiss as the lights go down and the screen lights up.

The artist’s studio
At last! A church that blesses bicycles. In front of purple drapery hang two salvaged bikes sharing a wheel – a work of art. Floor-to-ceiling windows along two walls of this warehouse welcome daylight. The floor is weathered wood. Seats cluster around café tables. The stage, in a corner, looks neglected. More bicycle art dangles in the windows: a wind chime made from a cut-up wheel, a spare-parts cross featuring a wrecked sprocket that might be a crown of thorns. A theatre troupe is setting up for a play in here discussing Christopher Walken’s acting techniques – how he never rehearses his lines and scribbles out the punctuation. This is improvisational space. The nerves in your fingers are restless. You want to create. The pastor tells you the church owns the entire building and rents studios above the sanctuary to local artists for 75 cents a square foot. God’s probably up there now, a cigarette clamped between his teeth, spattering a canvas in a Jackson Pollock frenzy. He’ll be damned if he tells anyone what it all means.

The talk show set
The sanctuary is three basketball courts wide. During the week it’s a gym, but now the backboards have been retracted and carpets rolled out. Two thousand five hundred cushioned chairs curve in an expectant arc around the stage with its trinity of cinema-sized screens. You mount the empty stage; clearly it’s the place to be. Above you 30 speakers large as crates hang from girders. Four unblinking eyes stare at you: cameras, the kind used in TV studios. They have hand grips, trucks and dollies. One hangs from a boom long enough to swing out over the audience. Each Sunday these four eyes telecast the star pastor’s message to the outposts of his empire in Winnipeg, Steinbach, Selkirk and Calgary. Through the walls you hear the whine of Porsches and Corvettes accelerating around an obstacle course in the church parking lot. A sign on the sanctuary doors tantalizes with its promise of “theatrical strobe and lighting effects, haze and pyrotechnics.” Camcorders are forbidden. Turn up the lights. Let God stroll onto the stage, his teeth – whiter than Regis Philbin’s – throwing back the grins of a hundred spotlights. “Alright,” he says. “Who wants to be a millionaire?” It makes you want to buy the T-shirt. 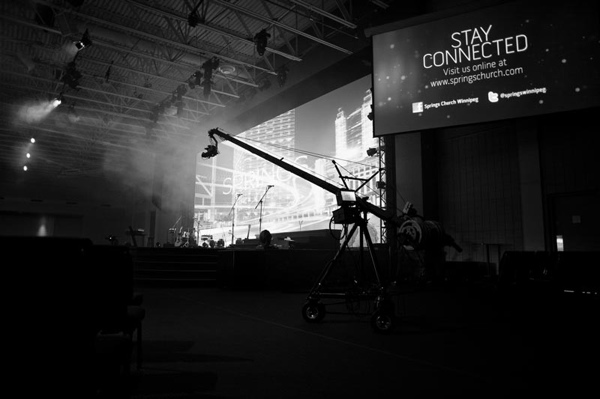 Sacred or spectacular?
John Neufeld, head pastor of The Meeting Place (“the theatre”), believes there’s nothing holy about an empty sanctuary. “Space is only sacred when people make it so,” he says.

Margaret Visser might disagree. Her book on the theology of stones and wood, The Geometry of Love, is a detailed argument for the sacredness of place. A sanctuary cannot conjure a mystical experience, she writes, but a building “created within a cultural and religious tradition . . . constitutes a collective memory of spiritual insights, of thousands of mystical moments.”

Most modern churches mediate those moments of mystery with high-tech sound systems and acres of drywall, says church architect Harold Funk. “Many evangelicals see their buildings as throw-away buildings,” he says. He backtracks a little here: maybe “throwaway” is too strong a word. But pomp-wary Protestants usually opt for sanctuaries that are functional and windowless. “With the current frenzy of electronic media, windows have become a problem,” says Funk. And urban congregations want glassy

façades that will entice the metropolitan crowd. Funk says he’d love to build long-lasting works of art infused with meaning (he holds degrees in theology and architecture) but the client is boss. Guy Debord and his fellow Situationists would be appalled but not, I suspect, surprised. Debord indicted modern capitalist society for turning experience into commodity and repackaging subversive ideas to render them market- able and benign. (Che Guevara T-shirts come to mind.) It would not surprise him to see the unsafe and elusive God who upended pulpits of oppression framed behind polished glass, mirroring the sky- scrapers next door.

Josiah Neufeld is a freelance writer living in Winnipeg, Manitoba.