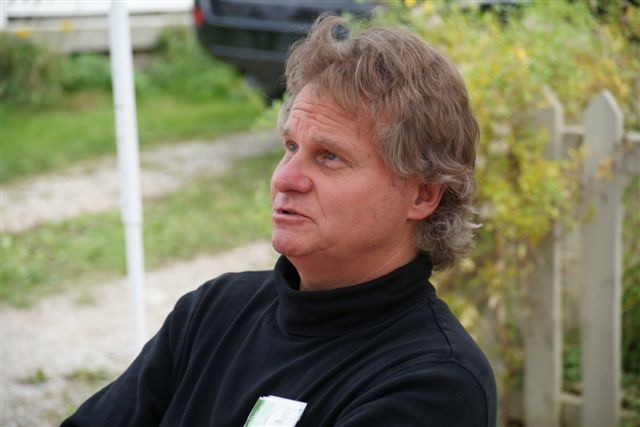 Wade Davis is a full-vocabularied cultural anthropologist. He’s a National Geographic explorer and veteran TED talker. Here at Geez, we thought he’d be a prime expert to talk about free time and leisure in different cultures, especially in cultures outside of industrial society. Geez publisher Aiden Enns couldn’t resist an additional question about the impact of Christianity as well. We interviewed him by phone at his Washington, D.C. residence.

The whole idea of having to find leisure really came out of the Industrial Revolution. If you think back to a pre-industrial European past, essentially an agrarian society, your fields didn’t take days off. You were committed to that work 24/7, and the only respite you received was due to biblical teaching. That allowed you to have the seventh day as a day of rest. Sunday became the day of leisure, of relaxation, of family and food and reflection. During the rest of the week, leisure was not an option. You rose with the sun, you had work that carried you through the end of the day.

It was really only with the Industrial Revolution, and in a sense the rise of the trade union movement, that suddenly people had time on their hands. Then began the bifurcation between the workplace and the place of leisure. If you think about it, the 40-hour work week implies that. I mean, how many hours are there in a week? Twenty-four times seven [that’s 168 hours].

We work according to the standard formula of a 40-hour work week (in France and other places it’s even less). Take aside sleep, and you realize that the majority of our lives, in fact, are not working.

That divide between leisure and work really now defines our lives. It has real repercussions particularly when people come to retirement age. Where work has been a defining anchor in their lives, and they suddenly lose that anchor, it can be very disheartening and demoralizing. That separation is really a Western thing.

In traditional cultures there is no separation between work and leisure, there is only life. As a friend of mine has said, if free time were to be a measure of wealth, some of the nomadic hunting and gathering societies of the world would be the wealthiest people. The hours that they have to invest to secure their daily bread and maintain their way of living are far fewer than what we have to do to maintain our sometimes frenetic lifestyles.

I’m thinking about the ancient Polynesian cultures you talk about. What would they do with that time when they’re not hunting?
They had huge amounts of time on their hands. Anyone who travels around the world soon recognizes that people [from traditional cultures] seem to be awfully good at hanging out, in conversation and being with each other, doing central activities, women weaving together, men working in one form or another, but hanging out, talking. People just seem to have a comfort level with inactivity [and] silence. You don’t have to speak; you can just be at ease. How many travellers from the West go to these areas – whether it’s Bhutan or some tribal community in the Amazon – and are perplexed at how people living in material scarcity or simplicity (by North American standards) are nevertheless happy, and also happy without doing much.

Our notion of boredom, where does that come from? My guess is that it is the withdrawal from frenetic activity and non-stop stimuli. Think what an ordinary life is like now in an American or Canadian suburban family. The kids are programmed to the hour from 7 a.m. through midnight.

Then dad and mom get into their separate cars behind glass, having already checked their email, and then drive in a stream of traffic for what, 30 minutes to an hour or hour and a half? Then, wishing they could go 60 miles an hour, but probably crawling along, to park their car, to run up into a kind of a big, relatively sterile space of cubicles with more computers and more glass. And their day is filled with meetings which do or do not produce anything, and the mantra in life is “I’m busy.” I mean, it’s extraordinary – there’s a cult of being busy.

It’s an indication of how cut off we are from the ordinary stream of social behaviour that we would even have to ask the question, “How do people deal with their leisure?” Because people don’t have any leisure outside of this Western [busyness]. Obviously people [in traditional cultures] take naps, learn to read and meditate, but you don’t have that separation between work and play.

You’ve travelled a lot as an anthropologist. I’m thinking about the tourism industry: how can the average North American tourist really see other cultures and learn from them?
The classic distinction between travel and tourism is that tourists go with a return ticket and a fixed agenda, whereas travellers go with a one-way ticket and no agenda whatsoever. The traveller goes to be transformed; the tourist goes to bring back an experience which becomes like a commodity.

A lot of people ask me whether I think tourism is detrimental to indigenous people or to traditional cultures and I think it really depends. In some places, such as the highlands of Peru, for example, the sea of young Americans and Canadians and Europeans who went down the Gringo Trail in the ’60s and ’70s had a profoundly significant impact for the good in Peru and Colombia.

I was just watching you [in a video on your website] with Hawaiian folks travelling across the water. You talked about the tremendous damage that Christian missionaries did [to indigenous cultures]. We have lots of readers from the Christian tradition. What advice do you have for any readers who might be considering the call to be a missionary?
Well, the biggest agony of human history has come from the inclination of all peoples to be culturally myopic, fiercely loyal to their own interpretation of reality. You know, the word “barbarian” comes from the Greek barbaros, one who babbles. If you didn’t speak Greek, you didn’t exist. In the Nahuatl language of the Aztec you had the same notion. The name of any indigenous group translates as “the people,” the implication being that the other people, the other things, and the Other – all those guys – are savages beyond the pale.

That cultural myopia has tormented humanity since the dawn of consciousness and we simply can’t indulge it anymore in this increasingly interconnected, multicultural world.

The central lesson of anthropology is the idea that the world into which you were born is just one model of reality. It’s a consequence of one set of beliefs and ideas that your lineage developed, however successfully, generations ago. The other peoples of the world are not failed attempts, they’re unique answers to a fundamental question: What does it mean to be human and alive? When they answer that question, they do so in the 7,000 different voices of humanity. Those voices reflect 7,000 or more different adaptations and reflections which collectively become our repertoire for dealing with the challenges that confront us in the coming centuries. Every culture has something to contribute.

We have to become very cautious about imposing our beliefs or our ideologies on other peoples. I mean, ironically, there are only two religions in the world that maintain that they’ve got a route, and a monopoly on that route, to God: Christianity and Islam. Two really closely related religions which, in a sense because they share that conceit, are at each other’s throats, and have been for so long. This horrible evangelical tradition has been the cause of so much agony in the world. The same kind of zealotry that we condemn in radical Islam, Christians have imposed throughout history with equal blindness and equal ardour.

To someone who wants to go and do mission work I say follow the true path of Christ: keep your beliefs to yourself; go and just save lives. The real Christian act is an act of charity. If you go off as a medical missionary, or do work with the poor, then give of yourself – everything you have – for the well-being of others, to me that’s the ultimate act of a Christian missionary.

When you consider the momentum for industrial development, such as, for example, the tar sands in Alberta and the proposal for the Northern Gateway pipeline, where do you find hope for the future?
In my children, in being a father. I think pessimism is an indulgence. “Anyone who thinks they alone can change the world,” as Peter Matthiesson said, “is both wrong and dangerous.” But you have an obligation to bear witness to the world and do your bit. No one can be perfect, but try to embrace a kind of Hippocratic oath in your own life: Try to do no harm to each other, to family, and to the land that supports us. To me, that is ultimately the message of Christ.

Dear reader, we welcome your response to this article or anything else you read in Geez magazine. Send your comments to editor [at] geezmagazine [dot] org, or write to the Editor, Geez magazine, 400 Edmonton Street, Winnipeg, Manitoba, R3B 2M2.