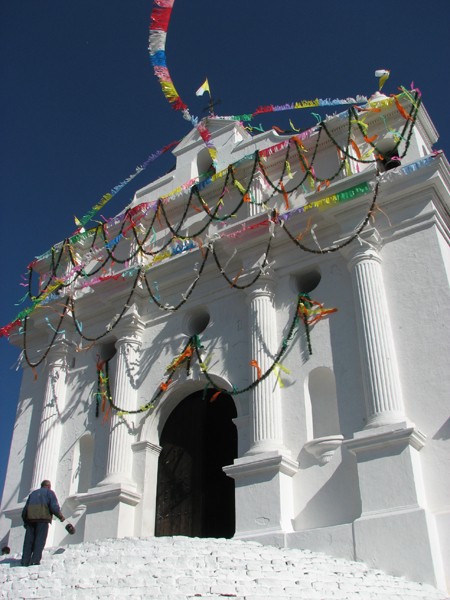 Ever since colonizers brought their grandiose architecture to the New World,

the Roman Catholic Church has been leaving a mark on the Latin American landscape. Its churches are everywhere. Many are monumental in size and extravgance, but are they monuments to sacredness or imperialism?

During several stints in Latin America in the past 20 years,I have visited many spectacular Catholic churches: Jesuit ruins in the jungle of eastern Paraguay, where The Mission soundtrack almost echoes in the silence of gallant missionaries past; the hyperboloid Cathedral of Brasilia, where resplendent modern design makes you feel like you’re praying beneath an aquamarine ocean; and the Cathedral in Cap Haitien, Haiti, where a bronze colonial warrior invokes the memory of a conquest that obliterated the indigenous people of the island.

Every city seems to have a Catholic church extravagant enough to be a tourist attraction. The oldest and largest of all is the enormous Metropolitan Cathedral of the Assumption of Mary in Mexico City. It anchors the city square, where it has literally caused the ground to sink under its grandiosity, ground that was once an indigenous holy site.

All these churches are impressive, but also troubling.

I used to love stepping off a hot busy street into a big stone sanctuary. I loved the quiet, the candles, the mass of rock, the kerchiefed old ladies kneeling in prayer, the large public plazas outside. But by my last visit to Latin America, I had lost interest. As if overdosed on ambivalence, I couldn’t reconcile the mix of sacredness and ostentation I saw in these churches.

Undoubtedly, they are a mixture of both.

Perhaps time has redeemed these buildings. For example, at the Church of Santo Tomás in Chichicastenango, Guatemala, Mayan rituals now coexist with Catholic imagery. Perhaps the origins of the old churches can be forgiven and now they can simply be put to good use. But time does not erase architectural essence or intent. The buildings still say something; for me, the fact that their message is so mixed has tainted their sacredness.

I believe in beauty and occasional grandeur – and I am glad for every holy moment people experience in these places – but the ostentation and architectural heft miss the point. All these churches are, by design, monumental. They are large, heavy, laden with symbol and permanent. None are humble. 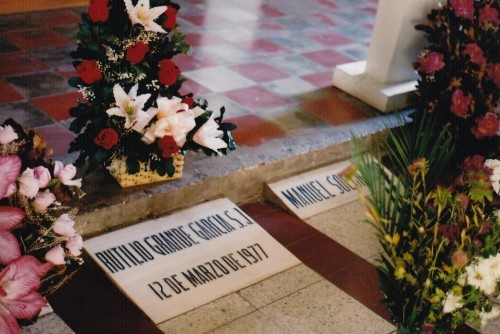 The grave of Fr. Rutilio Grande at the front of the little Catholic church in the Salvadoran village of El Paisnal. Credit: Photo by Will Braun

The most memorable and spiritually enlivening churches I have visited in Latin America were unlike these monuments; they were all simple and lowly.

On the dusty outskirts of Alagoinhas, Brazil, for example, we knelt on the floor of a bamboo prayer chapel at the Taize monastery. Candles burned, a guitar played, deaf kids sat next to monks, and the worship was so so beautiful that the memory of it still soothes my soul 15 years later. The unfurnished, small, flat and circular space was welcoming to all and left little room for hierarchy. It invoked an awe that was more tender than majestic.

Likewise, the ordinary-looking Catholic church in Arcatao, El Salvador, outshone the big city churches. Most impressive were the items on the walls. At the front hung photos of dozens of people murdered or disappeared during the years of repression. Above the altar was an image of Oscar Romero, the legendary archbishop who was assassinated in 1980 for his solidarity with the poor. The stations of the cross painted on the sides of the sanctuary depicted Christ suffering, dying and rising amidst local scenes of war and environmental destruction. The photos and paintings made this utilitarian-looking building not the shrine of victors but a spiritual home for struggling peasants.

The same was true of the tiny, tidy Catholic church in the Salvadoran village of El Paisnal. It was a typical small-town church, except for three graves in the sanctuary. Between the front pew and the altar lay the graves of Father Rutilio Grande and his two travelling companions. In 1977 they were shot for their allegiance with the peasants, an event that helped solidify Romero’s commitment to accompany the poor.

I do not mean to over-idealize these modest churches; I simply highlight the fundamental differences in their design and essence compared to cathedrals.
To be sure, sacredness, beauty and humility can be found in outlandish cathedrals and mega-churches. But my wanderings in Latin America have led me to seek the little places – spaces of vulnerability, struggle and simplicity. I’ve found that these are the places where God is most likely to leave a mark.

Will Braun is a former editor of Geez. He lives in Winnipeg, Manitoba and can be reached at wbraun@inbox.com.
Will builds on this article in his recent blog entry The Architectural Least of These