Try no WiFi at home 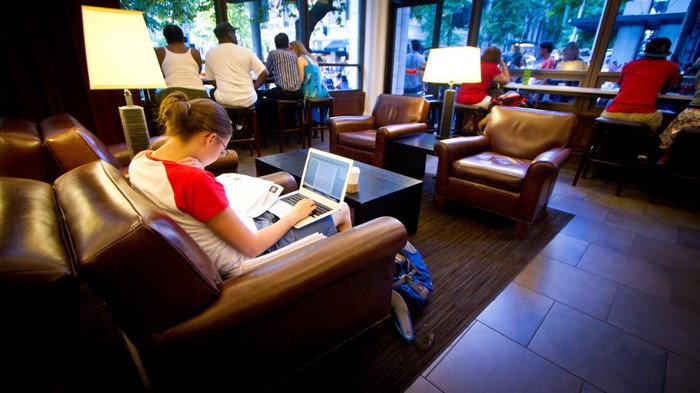 Of all the threads available on Reddit, it’s perhaps best that I was addicted to a particular trio of subjects: “anarchism,” “ecofeminism,” and the “environment.”

I would lurk – that is, read posts without contributing any content – for a majority of the many hours I spent on the website, occasionally summoning the audacity to post a comment. I would word and re-word each post. My most “up-voted” remark on Reddit was in defence of Christian anarchists, namely Dorothy Day, Leo Tolstoy and Jacques Ellul. It was while seeing the votes climb on that particular post that I became a Reddit addict.

My relationship with Reddit was the same as I had with Twitter, and Facebook before that. Check my profile routinely, often every half-hour or less. If I wake in the middle of the night, browse the aforementioned topics – or the forum of cute cat pictures if temporarily diverted – until I resume dozing. And my first urge upon waking in the morning? Scrutinize my account for any mention of yours truly. To be clear, the virtual network often served as a vital source of awareness for me, providing detailed accounts and commentary on topics ranging from catastrophic climate change to tedious yet significant government legislation.

It was only when I moved into a new apartment without a WiFi connection that I became conscious of the detrimental nature of the internet: I couldn’t recall anything from the hundreds of hours I spent scrolling. That’s not just hyperbole for the sake of a sturdier case. My mind had been vacuumed. I had scanned many fascinating articles, some even leading me to voice indignation to friends and coworkers. But months, even weeks or day later, I couldn’t recall a single thing. All those illuminating pronouncements on soil erosion, corporate hegemony, and bottom-up organization, gone. Evidence of an information glut, as Neil Postman once called it. My mind just couldn’t retain it. 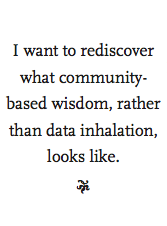 That’s why I’ve lived without WiFi at home for the past 60 days. Some would call it an internet fast. The endeavour – partially due to a certain unwillingness to part with my minimum-wage dollars, if we’re going to be totally honest – has the possibility of scoring some kind of cred in hipster circles. But at risk of coming across as all-too-holy, it’s bigger than that. I want to rediscover what community-based wisdom, rather than data inhalation, looks like. In my experience, that’s simply not possible with the internet. Some users of social networking may be able to reconcile the frantic form with an inward stillness. For whatever reason, I cannot.

A self-imposed curtailment of internet usage has stipulated that I only check email in the presence of other people. Cafes, libraries and friends’ houses serve as such venues. It might seem like an egotistical act, a gunning for cultural capital. It could be. But one thing is sure: I spend far less time on Reddit, Pitchfork, and CBC. In fact, these days, after checking my email, I often close my browser for lack of interest in superfluous knowledge. Not that such an act is inherently beneficial. But for me, it means that I converse more with people in real life, despite my intense introversion. I’m just not giving myself a choice to retreat into the web.

James Wilt is an associate editor of Geez magazine in Winnipeg, Manitoba.