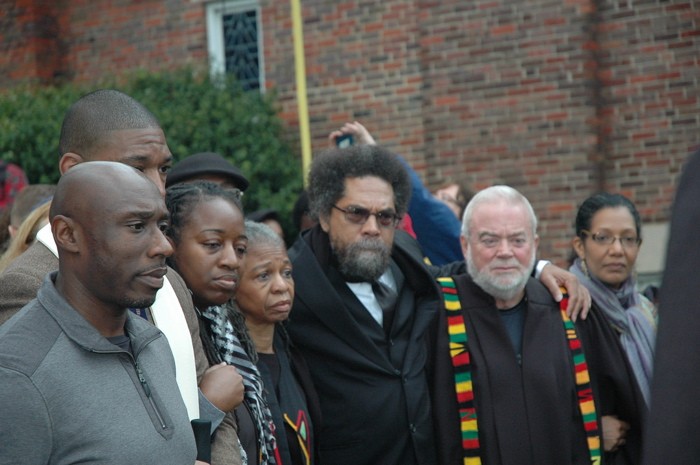 It could be considered the ultimate insult: after the news came that a St. Louis County grand jury refused to indict Darren Wilson, the police officer who killed 18-year-old unarmed Michael Brown in August of 2014, Flood Christian Church – which is attended by Brown’s parents – was burnt to the ground.

It’s assumed that the church was targeted by counter-protesters. Before the act, Carlton Lee – the pastor of the church, who had invested his life savings to renovate – had received death threats for speaking out against the Ferguson Police Department. His dog was also poisoned. But, as with many other churches in Ferguson, the congregation has remained resilient.

The protests occurred in two waves: one immediately following the shooting, and another after the stunning announcement that Wilson wouldn’t even stand trial for the shooting. Military-grade equipment and tactics were used by local police to quell the protests which manifested in marches, vandalism, looting, and arson.

Sanctuaries have served as meeting places for activists from the beginning of the protests, especially in the second wave. Ronald S. Johnson, captain of the Missouri State Highway Patrol, addressed a large group of parishioners and community activists in Greater Grace Church. The state attorney general visited the Greater St. Mark Family Church to express his sadness and pray.

Al Jazeera reported that over 15 churches committed to serving as 24-hour safe spaces – with food, water, phone chargers, washrooms, first aid and counselling – prior to the announcement of the grand jury decision. Some churches wouldn’t allow on-duty police officers into the sanctuary without warrants. But for other congregations, reaching out to police officers is part of the work.

That concept of forgiveness anchors much of the work churches are doing: the New York Times reports that a service at New Jerusalem Missionary Baptist Church featured a meditation on the need to absolve those who have inflicted suffering. The assistant pastor of the church asked, “How many brothers and sisters, white or black, have we defamed with our words?”

In early December, Reverend Al Sharpton preached to a congregation of 2,500 people, declaring that “We lost the round, but the fight ain’t over. You won the first round, Mr. Prosecutor, but don’t cut your gloves off, because the fight is not over. Justice will come to Ferguson!” Later, Sharpton delivered a sermon beside the burnt remnants of Flood Christian Church.

Ferguson congregations are keeping the pressure on. Following a Thanksgiving dinner in a church basement – which also included some hymn singing and protest chanting led by New York City’s Reverend Billy and The Stop Shopping Choir – the 100-or-so church-goers went to nearby Walmart and Target stores to protest Black Friday shopping.

Officer Darren Wilson has resigned from the force without a severance package, pension, or benefits. Both the FBI and Federal Justice Department are looking into the case for civil rights violations, according to CBS News. There’s also an investigation into the police department itself. Most recently, President Barack Obama is calling for additional federal funding for better police monitoring.