The Frontman: Bono (In the Name of Power)

The Frontman: Bono (In the Name of Power)
by Harry Browne
(Verso, 2013)
A book review by James Wilt 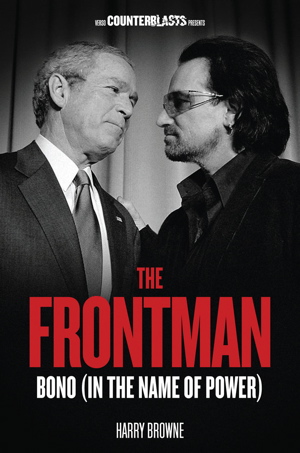 For years, Bono has struck me as a well-intentioned but misguided elite: sure, I thought, he’s irritatingly egomaniacal and hasn’t made a decent album since the early ’90s, but surely there are worse things a mediocre stadium rocker could be doing with their time than petitioning for debt relief at the 2005 G8 summit and starting a snazzy anti-poverty organization like the ONE Campaign. Right?

The Frontman: Bono (In the Name of Power) is for anyone who bought into the same farce. The mistake’s not entirely our fault – as Harry Browne, the author of the exceptionally written 160-page polemic, argues, Bono’s a top-notch marketer, convincingly retailing the narrative of himself as a world-changing, poverty-destroying, Christ-like saint. But as it turns out, he’s nothing of the sort. Bono wholeheartedly believes that corporate capitalism, technology and global trade can solve the problem of global poverty. Considering his stature in the international community, that’s a serious problem.

It should be noted that while Frontman is very much about Bono – it exhaustively chronicles his political involvement in three sections (Ireland, Africa and the World) – it’s certainly not just for U2 fans; anyone who’s concerned about the rise of the “celebrity humanitarian,” the proliferation of “consumer activism” and the subtle ways that neo-liberalism, paternalism and corporate capitalism have achieved global hegemony will find it both infuriating and fascinating.

Browne makes his position clear from the get-go; on the fourth page, he charges that “for nearly three decades as a public figure, and especially in this century, Bono has been, more often than not, amplifying elite discourses, advocating ineffective solutions, patronizing the poor, and kissing the arses of the rich and powerful.” The following pages explore the details with a vicious, Hitchens-like fervor. The tales are horrific – it’s rare that I have to take breaks from reading due to anger, but Frontman requires regular intermissions.

There are dozens of examples. Bono – who’s net worth is an estimated half-billion – advocates for debt relief, but does anything possible to avoid being taxed himself. U2 live-streamed footage from the Siege of Sarajevo during their Zoo TV Tour; Bono supported the invasion of Iraq two decades later. He constantly describes Africa (a monolithic entity in his eyes) as a “terrible beauty,” which stinks of Conrad-era colonialism. He heckled a Ugandan speaker at a TED talk in Tanzania when the speaker critiqued the Western model of aid. ONE Campaign’s Product (RED) has partnered with corporate giants American Express, Apple, Gap and Motorola – and Bono doesn’t see anything wrong with that. The list goes on and on.

Browne’s writing is concise yet loaded with research, and features a well-justified spattering of snark (“wherever two or three of the world’s rich and powerful are gathered, there too shall you find Bono, telling them how good they are,” he quips). The absence of interviews doesn’t lessen the significance of the work at all; there are other venues for that. This book’s a brilliantly crafted and very necessary takedown of a major player in the maintenance of inequality and corporate control.

But it’s more than that, too. By detailing the ways that Bono reinforces domination by doing supposedly good things, it calls all our lives into question, forcing us to ask how our own actions continue the legacy of colonialism, destruction of the biosphere and corporate domination. The world isn’t a good vs. evil contest. Bono isn’t exclusively bad. Given the same opportunities, any one of us could become him, and make the exact same errors. Frontman is a warning to us all.