Connecting the dots of the mining industry 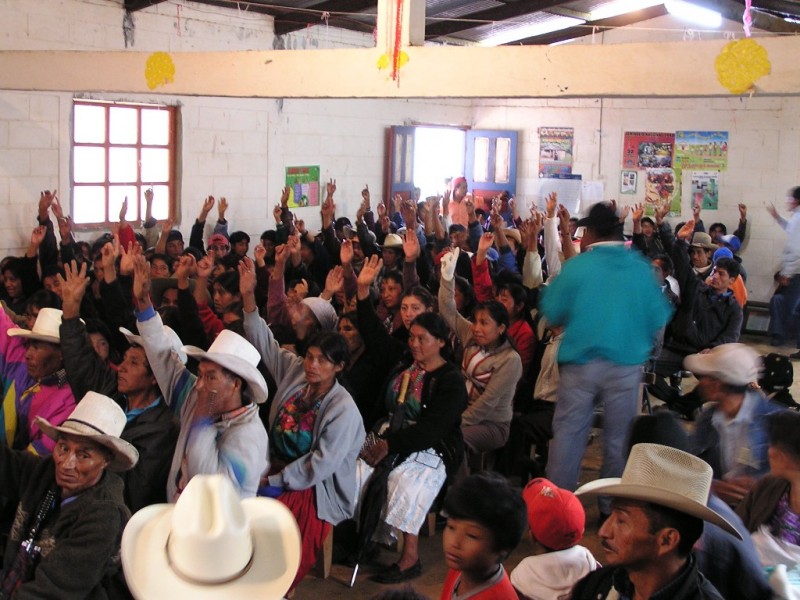 Guatemalan villagers voting during a referendum. They were asked to raise their hands if they opposed the mine. Credit: Photo courtesy of Pastoral Commission on Peace and Ecology

Of the many challenges facing the indigenous people of Guatemala, metals mining by foreign companies is quickly becoming the biggest.

The problem
Owned by the Canadian company Goldcorp and operated by its Guatemalan subsidiary Montana Explorada, the Marlin open-pit gold mine in the western highland communities of San Miguel Ixtahuacan and Sipakapa has galvanized an impassioned anti-mining movement which began in earnest in 2005 among the indigenous people of the region.

Dirty Metals: Mining, Communities and the Environment, a report by the No Dirty Gold campaign, cites the imminent and all but irreversible perils of open-pit mining, including cyanide pollution in the water, deforestation and erosion of topsoil, and the disintegration of the fabric of community life as tensions rise between the few who benefit and the many who are adversely impacted.

Goldcorp, which operates in Guatemala with funding from the International Finance Corporation and the approval of the Guatemalan government, points to job creation and community development made possible by the operation, as well as a boost to the national economy through taxes the company pays.

The opposition
The case has nonetheless drawn the ire of local residents and prompted the regional Diocese of the Catholic Church to start the Pastoral Commission on Peace and Ecology, or COPAE, a grassroots organization supporting residents opposed to the mine.

They argue that the communities in question were not properly consulted prior to the start of operations. This was despite the 1996 peace accords, which were central in bringing a peaceful resolution to the country’s protracted civil war and guaranteeing indigenous communities the right to govern themselves in matters of land use.

Nate Howard is with Mennonite Central Committee and works on income generation and food security in Sibinal, a community targeted by GoldCorp for expansion. He describes the mining issue as an urgent concern but sees it as part of a larger problem, one with spiritual implications. Christians in North America, he says, often don’t see the connection between faith and their consumption and investment practices.

“There is such a disconnect with our economics and how it affects people,” he says. “It’s a system of proxies; we take our responsibility and turn it over to corporations.” 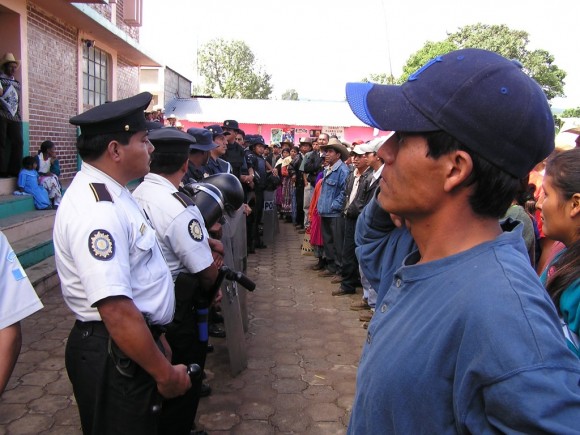 A few days after the vote, villagers gather for a formal announcement of the results.  The police came under the guise of keeping peace, using intimidation tactics. Credit: Photo courtesy of Pastoral Commission on Peace and Ecology

The uncertain results
This June, in response to complaints filed by residents of these communities in 2007, the Inter-American Commission on Human Rights (of the Organization of American States) issued a call for the mine’s suspension until proper investigations can be conducted. It is unclear whether the Guatemalan government will cooperate with this binding injunction.

Despite a community-organized referendum in Sipacapa in 2005 in which 98 percent of residents voted for mining to stop, extraction at the mine has
until now continued unabated,

The roots of the issue run much deeper, however, than an all-too-predictable but isolated case of rural poverty and government corruption in a third world country. In Canada, mining companies like GoldCorp receive taxpayer subsidies without being required to vouch for their actions overseas – including, at times, actions that are illegal at home.

A bill called C-300 is currently being considered in Parliament, which would ensure that companies not meeting basic environmental and human rights standards would be ineligible to receive subsidies. At the time of this writing, its chances of passage remain uncertain.