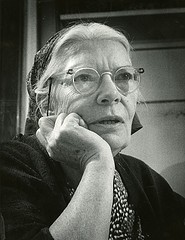 From its roots in the early 1930s, people in the Catholic Worker movement have been in and out of jail for acts of civil disobedience and resistance. The Catholic Worker newspaper recently published some of Dorothy Day’s early reflections on her time at the Women’s House of Detention and the way it both changed and affirmed life in her community.

Day explains that her time as a prisoner helped her see some faults in her Catholic Worker home. “How often we have failed in love, how often we have been brusque, cold, and indifferent. ‘Roger takes care of the clothes; you’ll have to come back at ten o’clock.’ Or, ‘Just sit in the library and wait.’ ‘Wait your turn, I’m busy,’” writes Day. “And now I was getting pushed here and there, told what I could or could not do, hemmed in by rules and regulations and red tape and bureaucracy.”

Day’s time in prison also confirmed the importance of the alternative lifestyle she was creating through the communal hospitality homes: “Listening to the prisoners talk about the kick they got out of drugs, I saw how impossible it was for them to conceive of themselves as “squares” – those who go out to work every day – and how hopelessly they regarded the world outside, which they nevertheless longed for hourly. They made me feel, too, that without a ‘community,’ in the early Christian sense, to return to, their future was indeed bleak.”

Despite the dark, air-less cells and continuous hellish noise of the House of Detention, Day listened to the stories of the women around her and spent time in prayer. “The whole experience in jail was good for my soul,” she writes.