Nonviolence Being Served in Baltimore 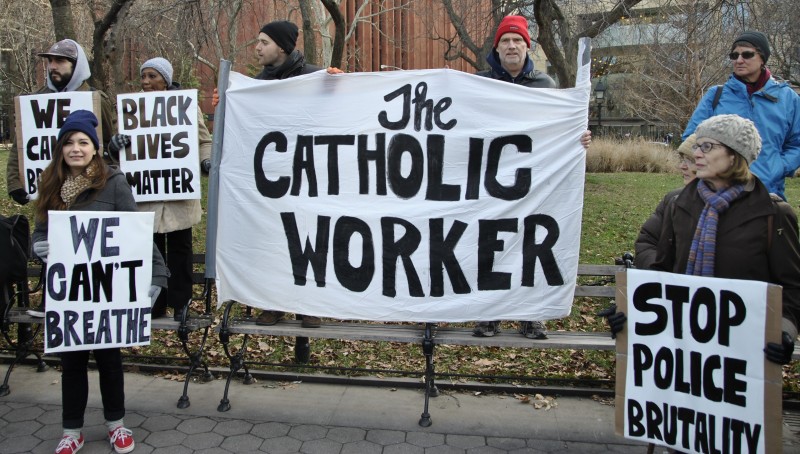 Nonviolent uprising turned to looting and fires on April 28, 2015, following the murder of Freddy Gray by the police in Baltimore, Maryland.

Five blocks away from the fires sits Viva House Catholic Worker where Brendan Walsh and his wife, Willa Bickham, have committed their lives. While businesses, schools, stores, and stadiums all shut down, Viva House remained open serving food and hospitality. As friends wrote and called to check in on their safety, they released a statement saying:

“The week-long curfew will end. The National Guard will pull out. The ball parks will re-open. The dice will roll at the casino. Shopping for useless junk will resume. People who work in finance, investment, development, and tourism will go back to making money. Probably even more money. And, all of this as if nothing happened. And life in the ‘outer harbor,’ life in the other Baltimore where people struggle and suffer great injustice, will also continue. But we know what has been happening. The future? As for Viva House . . . we open this Wednesday as usual. And nonviolence will be served too.”

Frida Berrigan, who was raised in Baltimore with her family as part of the Jonah House Community, watched the events from her new home in Connecticut. Fires and tear gas spanned the geography of her childhood. Reflecting on what it means to wagingnonviolence.org, she writes, “It means there is power, energy. Where there is rage, there is hope. Where there is anger, there is the passion to make the future different, better, more equitable, more just. Where things have been torn down, they can be built up again.”