It Gets Better: Coming Out, Overcoming Bullying, and Creating a Life Worth Living
edited by Dan Savage and Terry Miller (Dutton, 2011).
A book review by Lisa Martens 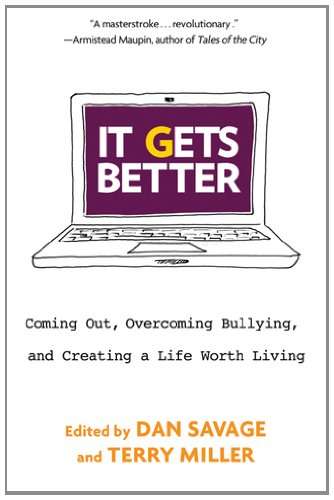 “Coming out was the most natural anti-depressant ever, better than cold whole milk sucked through two rows of mint Oreos,” proclaims U.S. comedian Kate Clinton in her contribution to the book version of “It Gets Better.” When seven American high school boys who had been bullied for being gay, or perceived as gay, committed suicide in 2010, sex columnist Dan Savage and his husband Terry Miller started the It Gets Better internet campaign. Fifty-thousand queer people and their allies sent messages of hope over YouTube, reaching out to lesbian, gay, bisexual, transgendered and transsexual teenagers enduring high school. Now the posts have been viewed five million times.

In 2011, Savage and Miller edited this book of letters for LGBT youth, written by a broad range of contributors, including British military officer James Wharton, self-taught healer Raven Mardirosian, Orthodox Jew Mordechai Levovitz, President Barack Obama and high school teacher Kristen Rivers, among other leaders, writers, performers, students, professionals and activists – 106 in all. LGBT letter-writers tell their coming-out stories, and talk about suicidal feelings and their current challenges and accomplishments, while straight religious and political figures add their own encouraging messages.

This book could be a good gift to an LGBT teenager, though for the particularly sensitive soul, I would recommend photocopying carefully chosen segments instead of handing over the whole thing. It’s a gold mine of quotes for teachers, preachers and counsellors, much of it repeating the tried-and-true advice for hurt people: reach out to someone you trust.

Dan Savage’s claim that the It Gets Better project “brought the old order crashing down” remains unconfirmed, but the founders are right to celebrate the campaign’s part in the incredible changes over the last several decades that have lessened violence and discrimination against LGBT people, at least in some countries.

If you have a niggling suspicion that, under certain circumstances, positive thinking can be just as harmful as negative thinking, this book may raise your hackles a couple of hundred times. I’m reluctant to take responsibility for promising anyone, ever, that their life will get better. Plus, I spy an accidental message that if you’ve had 11 books published, enjoyed a fantastic romantic relationship, had your novel turned into a Broadway musical and achieved a political position of incredible influence, you’ll probably feel quite a bit better, too, queer or not.

Some writers do show equanimity, including Ellen DeGeneres in her comment, “Things will get easier, people’s minds will change and you should be alive to see it,” but the subtext of how much better it gets when you’re famous is only partially offset.

The less catchy “It’s Really Okay” would work better for me, as well as placing Gabrielle Rivera’s letter within the first three, to help set the tone: “As a gay woman of colour, I just want to let the youth know that it kind of doesn’t get better. All these straight rich celebrities . . . they can tell you that it gets better because they’ve got money and people don’t care what they do . . . but what does happen is this: You get stronger. You realize what’s going on; you see how people are; you see how the world is. And as an adult, you learn how to deal with it.”

I’ll maintain my squeamishness at the too-sweet, pat and elitist threads of this book, but it is heartfelt, embodies diversity and even includes a playful “Get Out of Hell Free” card from Kate Bornstein. And because I’m certain that this book and the videos actually do save lives, it’s really okay.