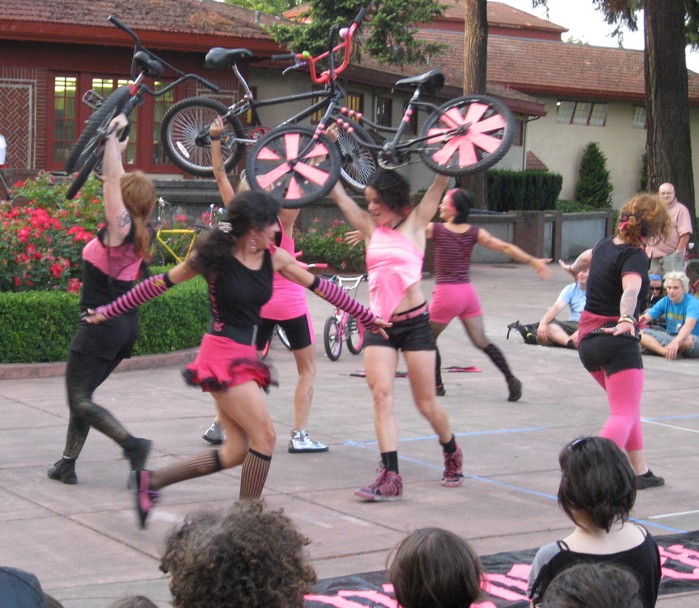 The Sprockettes dance troupe. An all women's dance troupe that promotes bicycle culture, and the positive self-image of all, among other things. Credit: Shelley Mags, http://www.flickr.com/photos/nurban/3665930331/

Binary thinking – either/or mentality. For instance, human/animal, mind/ body, male/female, master/slave. Usually leads to a judgment about which side is better. Just overturning the binary doesn’t always solve the problems it creates, so feminists, among other thinkers, try to get away from it altogether. Hard to do, though, hard to do.

Eco-feminism – does use the nature/civilization binary in favour of nature (the environment). But eco-feminists have their reasons (climate change, anyone?). They see humans not as superior, separate entities but as porous beings who affect and are affected by the ecosystems they live in.

Embodiment – women have been dismissed as dirty, messy, sloppy, hormonal and emotional. While on the one hand the feminist movement has been about proving women can be as logical as anyone else, on the other hand it’s been about reclaiming the connection to the body. Giving birth, for instance, is one helluva powerful connection.

Essentialism – the idea that there’s some sort of natural way to be, and that’s the right way. Sometimes known as “biology is destiny.” Kinda a double-edged sword for feminism. If you say women are more peaceful than men, you’re being essentialist. But sometimes you might want to ignore it so you can draw on the inherent peacefulness of women to animate your anti-war protest. Feminists got essentialist with “I am woman, hear me roar”-style activism that ignored crucial differences between women. They forgot to listen to the roaring of working-class women, women of colour, disabled women, etc. Not cool.

F*minist – what you might call yourself when you believe in women’s rights but have problems with the movement. Sometimes other feminists differentiate themselves through adjectives: Chicana feminist, queer feminist, etc. The reasons for doing so are as long as the histories of racism or homophobia.

Gender – let’s start with sex, which is often thought of as being a biological category (male/female). Gender is an idea of how people of a certain sex are supposed to be. Judith Butler argues that there is nothing innate about gender, but from the moment we are born (“it’s a girl!”) we perform based on expectations about our gender. You’re cisgender if your gender identity (what you feel you are) matches the gender you were assigned at birth, whereas you’re transgender if you’re someone whose gender identity doesn’t match the gender you were assigned at birth. Cisgender people sometimes identify as such to acknowledge the existence of transgender folks.

Misogyny – we’ll turn it over to Molly Lambert: “Women aren’t afraid of becoming men, but the undertone of misogyny is that men are afraid they’ll become like women. It assumes that to feel like a woman is to feel weak, powerless, degraded. But that’s not what women feel like! That’s just how society treats us. Men feel weak, powerless, and/or degraded every goddamn day. Misogyny allows men to separate themselves from negative emotions and ideas by attaching them to women, to a thing that they get to think they are not and could never be.” (From “In Which Your Ballroom Days . . .” This Recording, February 28, 2011)

Patriarchy – a hierarchical system where males compete for the alpha-male position. The men in subordinate positions put up with it because they’re still higher than other people. As groups in control will do, it seeks to maintain wealth and influence in the hands of men. See inheritance laws, divorce laws, old boys’ networks, etc. Under attack by feminists for centuries now.

The Waves – three eras in North American feminism. First wave: early 1900s, women getting the vote and counting as people under the law. Second wave: 1950s-1980s, reproductive rights, equality in the workplace, and valuing women’s work and experiences (yup, they meant white women). Third wave: 1990s-now, less traditionally activist or political than the other waves, partly because the causes are less clearly defined. Second wavers scold third wavers for being frivolous; third wavers condemn second wavers for being essentialist and racist. The rest of us agree that you can’t talk about feminism as one homogenous anything anymore, wave or not.

Womanism – Alice Walker coined this term in 1983 to describe a distinctly African American women’s movement. Black feminists had been excluded and misrepresented by the feminist movement, which was led mostly by privileged white women. For example, the Womanists observed that the freedoms of white women (from housework, from child care, from degrading labour) were often bought at the expense of women of colour and working-class women.