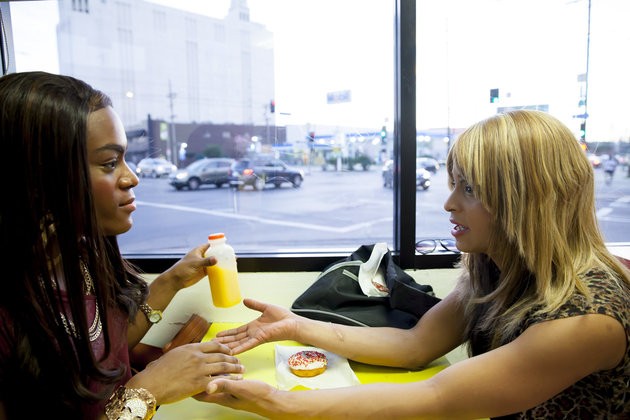 It is Christmas Eve in Los Angeles and two trans women are sitting at a scratched, bullet-ridden table in Donut Time, sharing a red-and-green sprinkle donut.

Sin-Dee Rella (Kitana Kiki Rodriguez) has just been released from prison, after doing a month for drug possession, and she is excited to tell her friend Alexandra (Mya Taylor) about her engagement to her boyfriend/pimp Chester–that is, until Alexandra tries to guess the news by assuming that the couple is breaking up. Alexandra’s reason: while Sin-Dee was in prison, Chester was cheating on her. To add insult to injury, this other girl is a “white fish,” or a white cis woman. After hearing this, Sin-Dee marches out of Donut Time to confront this other woman, and reclaim her man. The movie follows both Alexandra and Sin-Dee throughout the rest of their day, as Sin-Dee tracks down those who have wronged her and Alexandra tries to mitigate the ensuing drama.

While encounters with toxic masculinity are everywhere in this film, the only man given a storyline is Razmik (Karren Karagulian). As a cab driver, Razmik seems long-suffering and put-upon–a ripe specimen for the brand of masculine empowerment that says he can cheat on his wife to poorly assuage his dissatisfaction. While Sin-Dee is his mistress of choice, Razmik also picks up a different sex worker who directs him to a secluded alleyway. Upon discovering that the sex worker is not a trans woman, he kicks her out of the car, screaming, “That block is not for pussies!” In return, the sex worker calls Razmik a “fucking homo” and storms off.

This moment begins to unpack the complicated way in which trans women are both fetishized and fixed within masculinity discourse. In this exchange, there is nothing redemptive or celebratory of the trans body; there is only the rejection of the wrong kind of woman’s body. Razmik’s defensive need to control the area’s sexual geography by assigning “pussies” to specific blocks, combined with the sex worker’s response to him that he is a “fucking homo” for wanting a trans woman represents the ongoing cultural hang-ups about sexuality in general, furthered through all the assumptions and misunderstandings that drive toxic masculine discourse and pair gender with genitalia.

This mode of obsessive control reaches beyond the behaviour of men in the film, and encompasses the very medium of the film itself. Sin-Dee and Alexandra are constantly, indifferently, under surveillance–a fact that the camera choice serves to highlight. Tangerine (Sean Baker, 2015) was shot using three iPhone 5s cameras, positioning the viewer as the voyeur and the exploiter. Repeatedly, the camera–in a white liberal, toxically masculine kind of way that hangs on without necessarily having been invited to participate–tracks Sin-Dee and Alexandra, getting too close for the viewer’s comfort before retreating back to catch more of the subsequent scene.

As a result, the viewer is never allowed to be in a position of passivity or security. Simultaneously, we as viewers are also not allowed to occupy a space of intimacy: we can get as close as we want, but there is always a degree of remove, an invisible wall of separation, holding us apart from it all. In this way, we as viewers become complicit in the oppressive structures of power that oppress Sin-Dee and Alexandra. In the realization that we hold the camera against these women, we also participate in a system of toxic masculinity that essentializes bodies and drains gender performance of meaning.