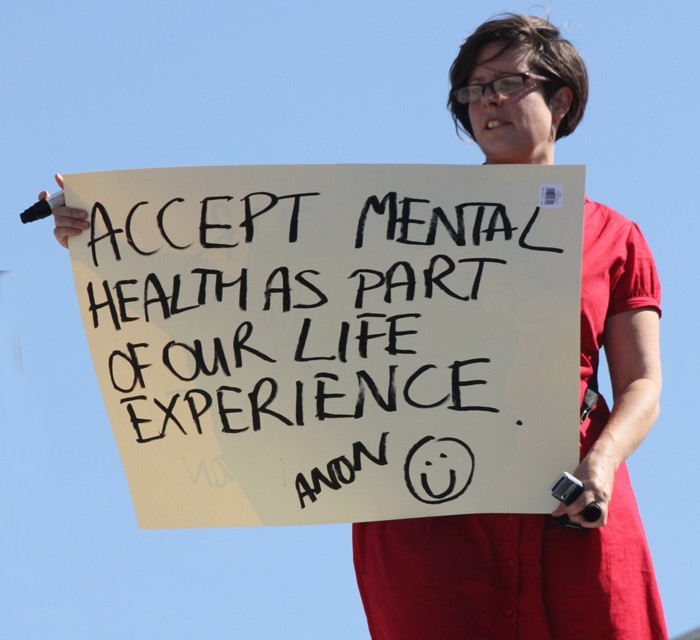 Mentally ill. What does that mean?

For some, the answer is obvious: sick. In need of medication. All over Canada, there is a move toward mental health awareness almost unanimously based on the notion that distress and madness are symptoms of biological illness. Despite the fact that no blood tests or brain scans can diagnose schizophrenia, bipolar disorder or other mental illnesses, our mental health system follows a narrowly medical model and treats people like collections of broken neurons, often trampling their dignity and humanity. The most troubled and vulnerable among us are often given repeated treatments that amount to drugging and warehousing, rather than empathetic and caring psychological help. Does the language of psychiatric disability create commonality and community, or does it abandon patients in a Siberia of enforced, lifelong otherness?

Jenny, from Toronto, is a survivor of such treatment. Living in Montreal, deep in student debt and trying to start a new life as a French speaking Anglophone, she began hearing voices. They spoke French, were often sexist, and commented on her actions, calling her names and speculating about her love life. She thought people were stalking her and plotting against her.

Jenny went to a hospital and was kept for three days of observation before a doctor simply said she was “paranoid” and sent her off with medication. She didn’t even realize what had been happening until she moved back to Ontario and the voices stopped. She has told her story to several professionals, but they have never explored the content of her voices.

“They just kind of nodded and were like ‘Okay, okay,’ because I think what they say is ‘Don’t encourage them.’” Jenny doesn’t like the assumption that she was too “crazy” or “deluded” to benefit from talk therapy during her darker times.“The content of the hallucinations was pretty meaningful, and had to do with various traumas that I’ve experienced and continue to experience. … It’s very dehumanizing for someone to listen to your suffering and then check a bunch of symptoms off on a checklist and give you a pill.”

Much blame is laid at the feet of the “seriously mentally ill” for mass violence and other anti-social behaviour, but little humanity is ascribed to them. There is no curiosity about their experiences – they just “are that way,” “different,” “ill,” rather than being survivors of injustices, suffering and traumas.

Irit, a B.C. resident, has had unwanted encounters with the mental health system over the years. She has been brought in to hospitals by police multiple times, sometimes handled roughly. She has been forced to strip or be stripped by others, and made to put on hospital pajamas. She has been kept in seclusion for up to 12 days on end, sometimes in concrete cells. Once, she was strapped to a stretcher by her wrists and ankles while nurses chatted nearby. She kept saying she had to go to the bathroom, but was ignored. She soiled herself and was left in her own excrement for hours. She was on a “privilege” system where previous freedoms, like going outside, had to be earned. Irit finds this system “insane. It’s humiliating and ugly, and adds to the trauma.” In hospitals, she has never been offered a chance to be heard, but has often been injected by force, in a way which has been “terrifying, humiliating and physically painful.”

There is a profound lack of empathy here. Such a system reduces some of us to either animals or broken machines, a huge chunk of our experiences not human or understandable. A dehumanizing philosophy leads to dehumanizing treatment: Hospital admissions that amount to warehousing on locked wards for indeterminate periods of time with forced drugging, chemical and physical restraint and little to no compassionate psychological help. Even when the pharmaceuticals don’t help, or even harm people, it seems that all that is offered is more of the same.

Yet dehumanization in the mental health system still escapes most people – even self-professed advocates. Traumatizing practices are whitewashed with the phrase “for their own good.” But what good – or harm – comes from treating people like broken machines? Only identification, empathy and human connections build community. It’s time we start treating mental illness as a type of genuinely human suffering.

Sara Arenson is a freelance journalist, playwright and screen- writer who lives in Winnipeg, Manitoba. She has written for alternative mental health sites and spoken to university students about the psychiatric survivor perspective.