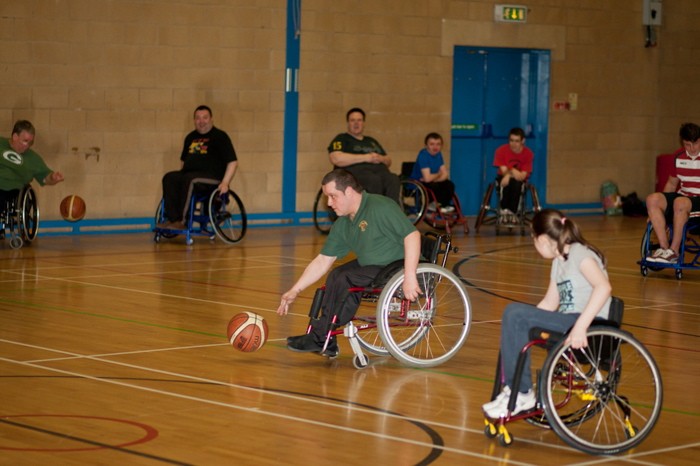 What is it about assisted suicide that curdles my blood?

Could it be that it follows after 20th century sterilizations of people with disabilities in Europe and North America and the various versions of “good death” (mass killings) administered to hundreds of thousands of people with disabilities through the Nazi eugenics program? Or is it Canadian farmer Robert Latimer’s claim to have been acting compassionately when he killed his 12-year-old disabled daughter in 1993 that sticks in my memory?

At first sight, helping someone who because of disability cannot commit any legal deed, including suicide, seems generous and righteous. Yet, it is disability rights activists, many of whom are eligible for assisted suicide under current and proposed legislation, who most vehemently oppose its legalization.

Most people think the eligibility criteria for assisted suicide is terminal illness and constant pain that cannot be relieved, but these are very slippery and difficult concepts. The concept of pain as expanded under permissive assisted-suicide legislation in European countries such as Belgium and the Netherlands includes existential and emotional pain. Broad definitions of terminality and pain include disabilities that do not necessarily prevent people from living full lives.

Mortal life is a terminal illness. Our ability to predict the duration of anyone’s life is notoriously inaccurate. Many disabilities, but not all, result in shortened lifespans. Disabilities such as Lou Gehrig’s disease (ALS) and multiple sclerosis, which are usually understood to be terminal, can be relatively stable for decades. For more than 60 years I have relied on wheelchairs to get around. In the past 30 years I have learned to live with ever greater and greater disabilities, sometimes called “post-polio syndrome.” I count myself blessed and very fortunate in my life, lived fully.

Many of us with visible “significant” disabilities have heard non-disabled people imply or directly state that they would rather be dead than live with our disabilities. The first time we are usually surprised, but after repeated incidents and some reflection, we see the danger.

The “better dead than disabled” attitude is pervasive, and public opinion on the severity and kind of disability that would be unbearable is a moving target that puts people with disabilities at risk. Our real-life experience of devaluation is probably our greatest reason to fear the legalization of assisted suicide.

Naturally, this devaluation is demoralizing and depressing for many of us, especially in our most vulnerable moments. Some of us integrate this devaluation and come to feel that our lives are not worth living. After all, the value and joy of just being over doing is largely out of favour in our culture.

Almost everyone experiences depression, sooner or later. The current consensus is that depression is treatable and that treatment is preferable to suicide. Counselling programs are in place, in part, to prevent suicide. I fear that with legalized assisted suicide, the reality for those of us with disabilities will become even more dangerous than it is now. Imagine this: a devalued disabled person becomes depressed and requests suicide counselling. The help-line service provider becomes aware of the disability factor and instead of counselling refers the disabled person for legalized (medicalized) suicide.

I do not assume that those who seek criminal-code changes to legalize assisted suicide are openly and consciously declaring their antipathy to persons living with disabilities, but the “Death with Dignity” movement does threaten our well-being. It is a profound insult to people with disabilities to assert that a person’s dignity requires that they remain non-disabled. Some people’s self-concept is so narrow that they cannot imagine having dignity if ever they were to need assistance in eating, washing or toileting. Those of us who require such assistance as part of our daily lives would disagree. 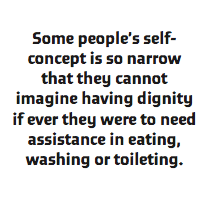 Disability-rights activists say each person has the right to their own definition of dignity, and we assert our dignity as more fundamental and self-generated than the dignity of the “Death with Dignity” crowd. After all, we allow babies their dignity in spite of their inabilities. Historically, we have not denied dignity to elderly people at the end of life, despite their need for intimate care. Is it unreasonable to demand the same respect for persons living with disabilities in their middle years?

The organized disability rights movement struggles to prevent legalized assisted suicide and all other forms of death-making for persons with disabilities. The Council of Canadians with Disabilities and the Canadian Association for Community Living, together representing hundreds of thousands of individual Canadians, are united on this issue. We may sometimes appear to be absolutist in this position. In fact, it is our devaluation that commands and sustains our resistance. Most of us respond not by choosing death but rather by pressing for the recognition of disability as a good and valuable aspect of the natural diversity found in human life.

For my part, once we achieve this major cultural transformation, I will no longer oppose the legalization of assisted suicide for all who freely choose it.

Jim Derksen lives with his daughter in a century-old house in Winnipeg and is semi-retired.