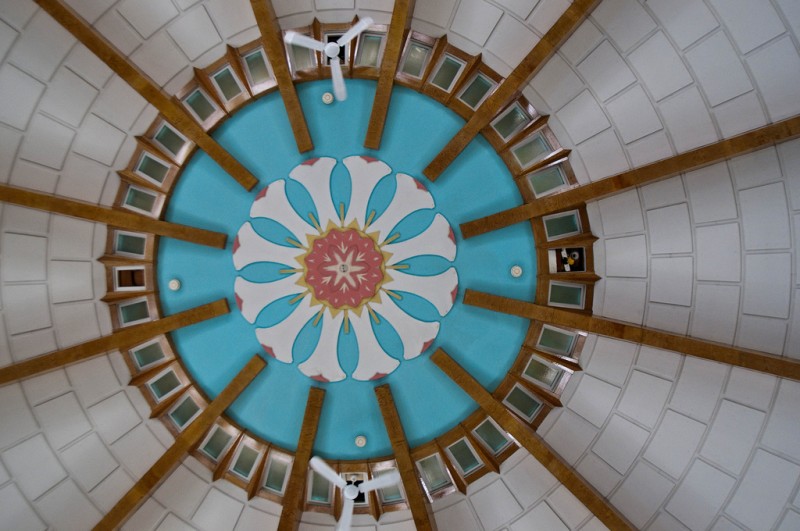 A church in Inuvik, Nunavut. Taken during the Truth and Reconciliation Commission hearings in Inuvik, June 2011. Credit: Michael Swan, https://flic.kr/p/a1s6mh

Who will represent the perpetrators, if not us?

As a Canadian of mixed ancestry, my thinking on residential schools has undergone a significant shift in recent years. Healing the rift between First Peoples and settlers is more personal than I used to think.

My Cree grandmother was a residential school survivor. I did not learn this until I was in my 20s, so deep was the shame and secrecy in my family. My father was raised in poverty in an isolated northern community, where he was abused physically and verbally by broken family members and white settlers. The wounds inflicted by residential schools still bleed.

Because of my family background, I had a tendency to approach Indigenous issues from a victim’s standpoint. I felt a kind of nobility of the wronged in the equation of reconciliation. Then I met a minister who works closely with the Indigenous community on the Downtown Eastside of Vancouver. She is a white settler. American. Baptist. She told me how she was challenged by a Native elder in a meeting about the Truth and Reconciliation Commission. She volunteered for the committee, but had come to the table without thinking she bore responsibility for residential schools. The elder said to her, “You are sitting at this table in the name of Jesus. I need you to know that people came to us in the name of Jesus and did these terrible things.” For her work on the TRC to have any meaning, she had to allow herself to be a representative of church leaders who had perpetrated abuse. She had to take on the role of the perpetrator.

She followed the elder’s advice. The way of the cross, she told me, is to seek reconciliation even at significant personal cost. The Church played an ugly role in the residential school saga, and when people of faith can own that history, we take a step toward reconciliation.

Hearing her story made me rethink my own posture as victim. I realized that I also occupy the space of a privileged Euro-Canadian: one who has roots in the theological and political traditions that gave rise to the residential schools in the first place. I am both the colonized and the colonizer. Accepting this truth was and is difficult. It has led me to a more honest examination of the colonial baggage that comes with my faith. I now believe that Christian communities bear a special responsibility to pursue reconciliation due to the Church’s role in creating and perpetuating racist institutions of oppression. We are called to participate in reconciliation. Because we are part of a system that created oppression, it is our responsibility to engage in the healing of our nation through repentance. We must acknowledge that we, the Church, created orphans and widows rather than following the Bible’s call to care for them. We carried out a terrible plan of assimilation and cultural genocide that clearly contradicts our call to love our neighbours.

For reconciliation to happen, there must be at least two parties at the table – the wrongdoer and the wronged. Those who were directly responsible are no longer alive, or in hiding. Who will represent the perpetrators, if not us? Taking on the role of a perpetrator is not easy. It is painful and humbling. But doing so enables us to engage in the reconciliation process in a meaningful way.

It took over a century to inflict the deep wounds of the residential school system. Similarly, it will take a commitment over generations to bring healing. I believe that if we acknowledge our forebears’ wrongs and take responsibility for our own ongoing complicity in colonialism, we can work towards meaningful reconciliation in this country.

Andrea recently graduated from law school, where she had the opportunity to learn about Canada’s history of using the law as a tool of colonial oppression. She lives on unceded Musqueam territory with her partner, James.