Beliefs Can Be a Trap 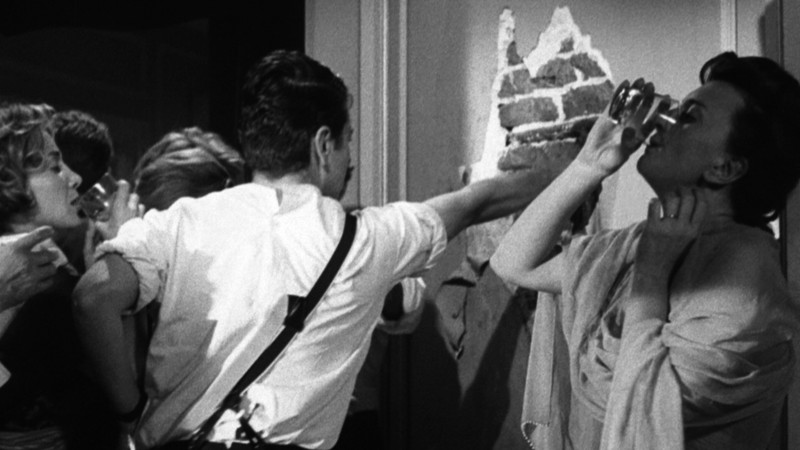 The Luis Buñuel film The Exterminating Angel explores the confines of a dinner with friends. Credit: Janus Films

A dinner party is the ultimate death trap.

Luis Buñuel’s The Exterminating Angel (1962) suggests that we are victims of our own everyday patterns, but it also cynically offers the suggestion that those patterns are the only security we can attain.

In the film, 20 fancy people attend a fancy dinner party at a fancy manor house. They eat and drink and, toward the end of the night, they become tired. What starts as an etiquette stand-off becomes a major breach in propriety, as the guests, one by one, simply lie down where they are, and go to sleep. When they wake up in the morning, the guests become increasingly alarmed when they realize they are unable to make it past the doorway without falling into despair. They cannot force themselves to leave the room.

So, they stay. Some grow feverish and delirious, two take their own lives, and one dies from natural causes. They are stuck in their own patterns of class, wealth, and community just as much as they are fixed to character tropes like “the doctor,” “the virgin,” and “the doomed lovers.” They languish uselessly on settees, bemoaning their fate and remaining uninterested in the outside world, further isolating themselves within their own experience.

The movie plays a lot with the concept of performance. In the beginning, the guests have just come from a night at the opera–an exclusive and lavish cultural event in which being seen is often more important than observing the slated program. The guests’ discussion over dinner demonstrates their awareness of the performances of others, while remaining ignorant of their own clichéd constructedness.

By next morning, what was a concert room has become a trap, a container in which they must repeat their own individual performances to themselves and others, saying the same things and falling into predictable patterns of self-expression and preservation. The camera only serves to highlight this by often hovering just outside the room in which the guests feel trapped. The darkened external room throws the music room into greater relief, and it appears not unlike a theatre stage. As if watching a play, we observe the wealthy dinner guests spiral out of control, while they run out of food and water, still demonstrating wasteful tendencies.

It is difficult to gauge how much time passes. One guest notes that they have been in the room for months, while another replies that it can only be a week at most. This indecipherability is only accentuated by the fact that, externally, the guests change very little. Though tired, sick, and starving, their party outfits remain pristine, and each woman’s hair remains well-coiffed.

Like the conclusion of a murder mystery drawn out too long, one of the guests discovers that they are all exactly positioned where they were the night of the dinner party. She encourages everyone to re-enact their movements and discussions; once they do, they suddenly find that they are able to leave the room. It is this final act of intentional performance, requiring the guests to recall their own actions in order to replicate them, that somehow frees them from captivity.

The fatalism of the film is that everyone is trapped in a cycle of performing their own beliefs, and even when they are forced to confront their acts, they do nothing to change future behaviour. The conditions of their captivity are the same as the conditions of their liberation. In the film, the wealthy upper classes will always behave one way, upholding oppressive institutions; the lower classes will behave another way, while also upholding oppressive institutions.

Of course, the final scene shows everyone in church the next day–one prisoner’s promise in exchange for her freedom–and the process repeats all over again. Crowds of wealthy mass-goers find themselves unable to leave the ornate sanctuary.

You know, just in case you didn’t get the message the first time around.

Rachel Barber and Mandy Elliott are film scholars, writers, and feminists who live in Winnipeg. They love chips and hate the patriarchy.