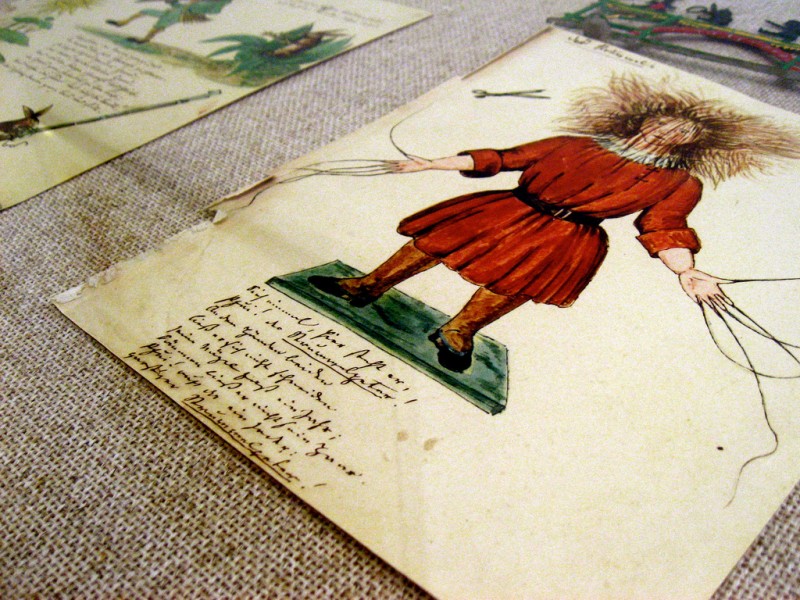 An image of Struwwelpeter, from the classic German children's book from 1845. Credit: Infinite Ache, https://flic.kr/p/9j3MVe

In the brown cupboard in the spare room
in the house by the post office lived Sleeping Beauty
and the boy who would be king
on slips of coloured celluloid that glowed
in the window-light through Viewmaster lenses.
Princess Aurora like a glass figurine,
young Arthur taking the sword from the stone,
enacting the fate set out for them
in seven stereoscopic views.

On the next shelf lived Struwwelpeter,
wild hair and curling fingernails menacing
from the front cover. His stories
all cautionary tales: Eat your soup.
Don’t play with matches. Don’t suck
your thumb. No knowledge of German
needed, the Or Else obvious
in the bright flames devouring the girl’s dress,
her cats weeping over her ashes. Long-legged
Scissors Man lopping off thumbs.
The fussy eater dwindling to a stick,
a soup tureen for a headstone.
Children, says Struwwelpeter,
here’s a destiny you can change.

Reprinted by permission from Eigenheim (Turnstone Press, 2015). Born and raised in Saskatchewan, Joanne Epp has published poetry in literary journals including The New Quarterly, The Antigonish Review, and CV2. Her chapbook, Crossings, was released in 2012. Eigenheim is her first full-length poetry collection. Married with two sons, she spent several years in Ontario and now makes her home in Winnipeg.