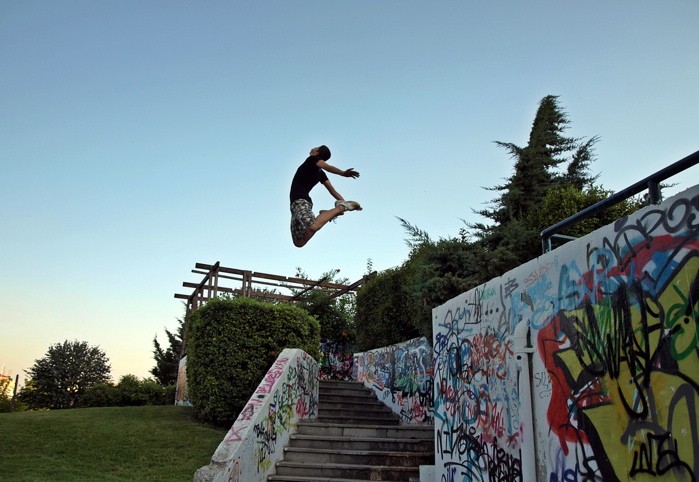 Unschooling is all about freedom.

Freedom to be who you want to be, learn what you want to learn, and learn at your own pace . . . without worrying about what society thinks. You can sleep until 10 in the morning, or have lunch at three. Your life isn’t dominated by schedules and bells, dictating when to do things. You can decide on your own! That’s why I’m unschooled.

From very early in my life, I have been active in the social justice and activism world. I have attended countless political rallies and marches. I have even driven with a group of nine friends to the tar sands in Fort McMurray, Alberta. I have seen the destruction that our government allows, and I try to help stop it. My parents met at Romero House in Toronto, a community that helps refugees land in Canada. I have always been around people who work toward change and social justice; that’s another one of the reasons I started unschooling.

A regular day for me starts around 10 or 10:30 in the morning. I wake up, have breakfast – usually homemade porridge – and have a shower. After that it changes from day to day. I read, write, work on various projects and sometimes go on a “field trip” with my dad. I also get several types of exercise, including walking, running, parkour, skiing, skating, cycling, sledding and so on. The things that I work on most each day are writing and reading. I have always loved to read. Pretty much any type of fiction will work for me: sci-fi, fantasy, historical fiction, mythological fiction, pulp fiction, the list could go on and on. I also love to write. During my life (including before I was unschooled), I have written lots of stories. Most of my stories aren’t entirely fiction; they usually have a base in something that has happened to me, or could have happened to me.

When I was in school, I was still trying to read and write and work on other personal projects, while keeping up with school work, choir, Scouts, apprenticing with a magician and spending time with friends. I just found that I didn’t have enough time to do everything I wanted to. Needless to say I was extremely stressed out. During the last stretch of my time in school, I was so stressed that I downloaded apps to help deal with it. That was a tipping point in my decision-making process toward unschooling. After much consideration, my parents and I decided it would make more sense to leave school than to drop all the things I enjoyed so much.

In the fall of 2012 I was fortunate enough to go to Japan. By myself! For four weeks, I stayed with my mom’s best friend and her family, the Takasugis, in Saitama, which is a suburb of Tokyo. During my time there, I made tons of friends, both young and old. I learned how to speak a little Japanese. I got to see temples and shrines, the mountains and the downtown neighbourhoods of Tokyo. I had such an amazing experience there, I will never forget it. And that whole trip wouldn’t have been possible had I not been unschooling. What better way to learn about a country than to go there? I learned so much, not just about the history but also about how people live there now, how their country works. I got to experience everyday life in Japan. The things you can do when you unschool are endless!

But like with anything, there is a con side as well, at least for me. I had been at my school for nine years before I began my adventure in unschooling. I was very well established. I had tons of friends, I liked the teachers and I enjoyed being with people all the time. Mostly. When I was in grade five, I found out that one of my best friends smoked weed. Lots of my other friends were joining gangs and doing drugs. I knew a girl who was on crystal meth. And that wasn’t the life I wanted. That’s another reason I unschool: I don’t need to worry about peer pressure or bullying or any of that crap. And believe me when I say that I had gotten my fair share of it and I have the skills to deal with it. I miss my friends, but I still see them around and hang out with them. I even started taking a class (career ed) twice a week at my old school, so I am still connected.

Unschooling is one of the best things that ever happened to me. I can control my own life; I can study what I want to, shape my life how I want to. I can still see my friends and make new ones. I get to spend a lot of time with my parents, and I don’t have to worry about what other people think. Unschooling is amazing.

Christopher Sanford Beck is a 12-year-old unschooler who loves writing and doing parkour in Saskatoon, Saskatchewan. He learns best when he is relaxed and unpressured.