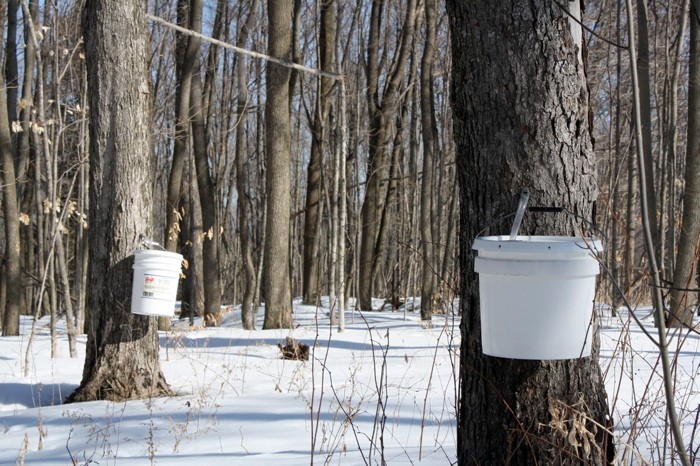 There is no logic to making urban maple syrup in your front yard.

You have to ask neighbours if you can tap their trees, collect more than 100 gallons of sap and then boil it down to two gallons of syrup.

But you can’t boil 100 gallons on a kitchen stove. So, if you’re like my friends, you light a fire in somebody’s front yard and boil the sap in a sink the size of a bathtub. It takes two days and half a pickup truck of firewood, which in this case was leftover wooden pallets from the shipping industry.

Because our friends chose to make the syrup in our front yard (few properties in our neighbourhood are large enough to house the buckets, piles of wood and roaring flames) I witnessed the effect this spectacle had on passersby. Amazing. Crazy. Wonderful. Are you serious? That’s how you make syrup? Why don’t you just buy some at the store, wouldn’t that be easier?

Some things make no sense and yet they are worth tremendous time and energy. If time is money, if labour is a commodity, if talent is a source of profit, then it is indeed absurd to waste days on what amounts to a bag of sugar you could buy for less than 20 bucks. But if time is an occasion to explore the miracle of life flowing in the veins of a nearby tree, if labour is the ability to carry bricks and buckets on a trailer behind a bike, and if talent is for levelling the tub so syrup doesn’t boil on one side and burn on the other, then making urban maple syrup is the purpose of being alive.

I’m interested in finding a different way to “do school” in our society because we’ve succumbed to a perverse logic, a distorted way of thinking, that has taken us away from living where we are and removed us from the wonder of life that surrounds us.

I’d like to see our curiosity, compassion and goodwill be given the freedom to blossom. Why should we allow ourselves to deteriorate on the treadmill of meaningless careers? Why ship our kids to factories where the techniques of industry can be introduced, reinforced and later exploited.

Astra Taylor, a homeschooled filmmaker and activist, found her stint at high school a spirit-crushing time. She asks, “Why would anyone want to submit to “irrational authority for six and half hours a day . . . in a series of cinder- block holding cells?” (See her story, which starts on page 9.)

John Taylor Gatto, a former teacher of the year in the state of New York, became disillusioned with the very notion of school. He’s concluded that schools simply produce “safe product” for “what the current economy demands.” (See his bio and some references in the “Digest of living dissenters” on page 16.)

I agree with these sentiments. But we need a blend of good public schools (as advocated by Gareth Neufeld on page 24) and a host of alternatives.

“We also need networks of learning centres, community projects, libraries, youth centres, parks, pools, gyms, playgrounds and museums of every possible variety. We need those networks to be alive in every neighbourhood, and they have to be commonly held and democratically controlled by everyday people,” writes Matt Hern (also in our “Digest” on page 17) in Everywhere All the Time: A New Deschooling Reader.

Hern, a “deschooler” (see page 20 for definitions), says we need to extinguish “monopoly state schooling and compulsory education.” This would allow our imagination and creativity to expand and our community enterprises to diversify.

It feels dumb to suggest we could deschool our society’s current way of learning, but perhaps that’s the logic we need. I’m in a state of flux right now: I still succumb to the comfortable learning patterns that drive me to learn things that make little sense. At the same time, I want to trust the anchoring feeling of making urban maple syrup. With the help of a community, I want to root myself and learn how to live where I am.