In the footsteps of Tammy Faye

Pastors’ wives lack for role models. Who is there to represent us?

Mrs. Billy Graham – Ruth – was born to missionary parents. In addition to being the perfect pastor’s wife she raised five kids, oftentimes on her own while Rev. Billy was doing the God stuff. Ruth managed to write more than a dozen books; I struggle to write this sentence. None of the kids ended up severely damaged and all of them are in some form of ministry.

The only person I can think of who is more godly than Ruth Graham is Mother Teresa, who only pulled one over on Mrs. Graham by marrying God himself. I will never be a Ruth Graham.

Victoria Osteen is the “Co-Pastor” of Lakewood Church. Her qualifications include marrying Joel Osteen.

I don’t understand this modern-day notion that when you marry the Reverend, you magically transform like water into wine and become a minister too. You deserve to be on the billboards and have a title.

It doesn’t make sense. Does your doctor’s wife automatically become a physician because she’s married to one? Would you let her give you a colonoscopy?

I’ll never be a Victoria Osteen. I’d never be able to tolerate a man who smiles that much.

Finally, we have the late, great Tammy Faye Bakker Messner. If I had to pick one pastor’s wife who blazed the trail before me, Tammy Faye would be the one. She had me at her love of inappropriate makeup and false eyelashes, and her ability to cry on cue. She also showed us there is life, even a reality show, after ministry, and she reached the highest pillar of success by becoming a gay icon. Finally, someone I can idealize.

Ruth, Victoria and Tammy Faye have one thing in common: they’ve all faced people’s assumptions about what it means to be a pastor’s wife. 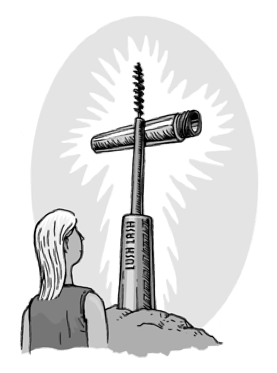 So have I. The worst is that you must love kids and will no doubt want to help out in children’s church.

Even though I live with a professional, I don’t know how to find most books in the Bible without using the index. Also, I do not know how to play the organ and cannot sing. If I could sing, I wouldn’t know the words without looking. I have no value whatsoever to add to your worship service. I don’t desire to be the one to lead us in prayer. However, if you need to be led to a restaurant or coffee shop, I’m your gal.

One of the first fights the Pastor and I got into was about the Ten Commandments. Every year the Pastor gives a pop quiz to his Bible students to see how many of the big ten they know from memory.

He wanted to give me the test. I’m not sure why I fell for this. I think I may have gotten eight, so I’m sure I hit most of the important ones. I don’t feel bad about this: the Pastor can’t remember all the names of the Kardashians. He also gave me a quiz on the qualities of a Proverbs 31 woman, and I pretty much flunked that one.

As a pastor’s wife, people expect you not only to know all this Bible stuff, but also to actually care about it like your husband does.

Recently, I ran into one of my husband’s Bible students at a coffee shop. The kid cornered me and proceeded to blather on about – get this – Bible stuff. Biblical interpretation. My eyes glazed over within the first minute. I guess he was trying to suck up to the Pastor through me. He would have been more successful if he had bought my coffee.

Does anyone ever insist on talking to the Pastor about fashion trends or his thoughts on cream versus powder blush? I think not.

Aside from what everyone else thinks, I know there is really only one person I have to answer to, and that is my husband. He wants me not to be late for church, but I usually am. He wants me to have loaves and fishes ready to feed the multitudes at a moment’s notice. He wants me not to do things that will get him fired. He wants positive feedback on sermons, even when they are terrible. He doesn’t want me to co-pastor a single thing, because he knows my strengths and weaknesses. And speaking of strengths, most of all, he wants me to own and wear the trashiest lingerie.

And I think Tammy Faye and I could wholeheartedly agree on that primary requirement of a pastor’s wife, without the need to burst into song or to have tears streaming down our makeup-caked faces.