We need to ‘remember to forget’ our stereotypes 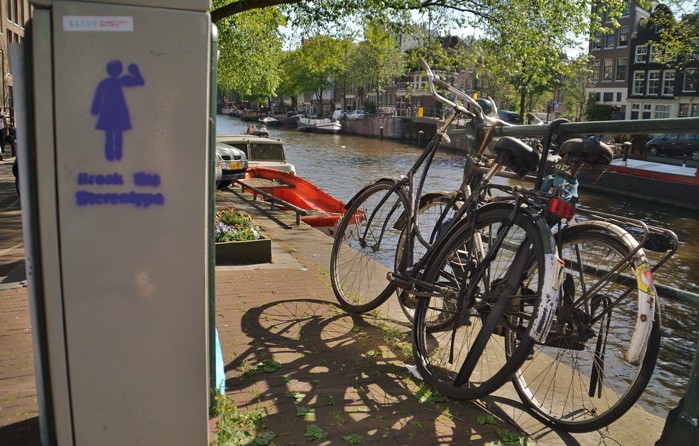 Have you ever had an encounter where you couldn’t decide on someone’s gender or ethnicity?

I remember a time at the movie theatre when i was washing my hands and i did a double-take at the person behind me in the mirror. Was that a man? However progressive or queer-affirming i might think i am, my split-second reaction showed i have a stereotype of who belongs in the women’s bathroom and what a woman looks like. My second look didn’t go unnoticed: the person smirked back at me in the mirror. “Way to go, Mel,” i thought.

Taking a second look at someone in the bathroom is not the worst manifestation of a stereotype. Maybe it could even be a good thing. Stereotypes happen in that instant of the encounter between the self and the other.

Although we might think we see clearly when we describe another, we are really looking through a haze of our own prejudices, emotions and experiences. And if we do realize we’re using stereotypes, we’re inclined to squash them and pretend they never happened. But what if we paused to examine our stereotypes instead of repressing them? We think it’s rude to stare, but taking a close look at our encounters with others instead of turning away to hide our prejudice might teach us something.

In “The bathroom chronicles” on page 54 of this issue, Ivan Coyote, a person who doesn’t fit the categories on bathroom doors, describes being on the receiving end of second looks, glares and other negative reactions from the people she meets in the bathroom. I like this story: there’s something about the understanding Coyote offers the people who judge her that makes me – as one who stereotypes – feel both forgiven and capable of change. Her butch gender identity (not quite female, not quite male) can serve as a metaphor for a more fluid way of thinking about all of our identities that might help us undo stereotypes.

Feminist theorist Rosi Braidotti writes that it’s time for us to address the “imaginative deficit” that prevents us from getting over the strict categories of a former era (male/female, black/white, self/other, human/machine) and find new ways to describe the “nomadic,” fluid subjects we have become in our late-global-capitalist era. Our bodies move smoothly across the geographical borders of our dying nation-states, across material and virtual spaces, and between and outside gender categories. They testify to less stringent categories of human experience that are already at work in culture but that we haven’t yet found the language to describe. We need fresh, realistic ways of thinking to effectively resist the forces of globalization and corporate control that affect us, and we need them so we can live in ways that affirm difference rather than rejecting it.

It would be great if we could just forget about stereotypes and move on, but we can’t just wish them away. As Braidotti writes, it’s not good enough to disavow our old ways of thinking. Instead, we have to pay attention and peel away at them: “Like a snake shedding an old skin, one must remember to forget.”

The nine “bias busters” you’ll find in this issue of Geez are some mental and spiritual exercises you can try out as you peel away at your own assumptions. The stereotypes we highlight are funny and ugly, sneaky and squirmy. We hope that taking a good look at them instead of repressing them can help us imagine new ways of relating and thinking. We can do without stereotypes. Let’s take some time to imagine how.

Melanie Dennis Unrau is editor of Geez. She can be reached at melanie [at] geezmagazine [dot] org