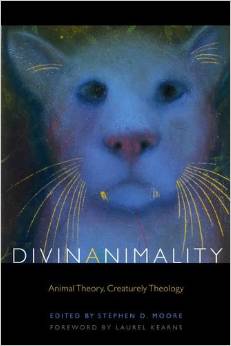 Divinanimality: Animal Theory, Creaturely Theology is a collection of essays based on a conference of the same name held at Drew University in 2011. The intersection of theory and theology indicated in the subtitle is found principally in the work of Jacques Derrida and the Christian Bible. The word divinanimality was coined by Derrida in his work The Animal That Therefore I am. The term is an expression of the “other,” particularly the other-than-human that humans have come to define themselves against. Derrida writes of this divinanimality as “the quasi-transcendental referent, the excluded, foreclosed, disavowed, tamed, and sacrificed foundation of what it founds, namely, the symbolic order, the human order, law and justice . . . Must not one recognize Father, Law, Animal, etc. as being at bottom the same thing?” This understanding runs contrary to most of the Christian West where to be human is to be neither God nor animal. This collection explores the reality that we have never actually been good or even able to maintain those boundaries.

A clear strength of this collection is the strong biblical interpretation that picks up on neglected texts related to animals or re-interprets well-known texts in light of animal studies. This comes in emphasizing marginal texts like the dogs of Exodus 11:6, which were able to identify the honoured humanity of the Israelites. Another essay tackles the well-known and revered image of the New Jerusalem and begins to wonder why all the animals are banned and nature itself seems more like the artificial display of a shopping mall centre court.

Acknowledged several times, a question that haunts these essays is the degree to which humans can or should say anything in response to or on behalf of animals. These essays often cite Donna Haraway, who critiqued Derrida’s turn to the animal when she said that Derrida “came to the edge of respect but was sidetracked by his textual canon of Western philosophy” (111). While several essays acknowledged this critique, it is difficult to judge whether any of them escape it. We as humans theorize, and this is, after all, a book of theory. This situation reminded me of Glen Coulthard’s recent work, Red Skin, White Masks. Not without tragic irony, Coulthard ruthlessly dismantles the banner of “cultural recognition,” saying that the state has only postured itself as more “civil” (more humane?) but has done nothing to actually shift or yield its concentrations of power to Indigenous people. Many of the essays in this book feel as though a similar move of recognition is being made which positions us as more enlightened – again, more humane. There is, however, very little that would acknowledge how animals are gaining ground, coalescing power in this relationship.

On an individual level, there is one essay that may gesture to a relationship beyond mere recognition. Erika Murphy explores Hélène Cixous’s account of being bitten by a family dog as a child. What is important about this account is that the dog takes the initiative and communicates (bites), or at least shifts the balance of power. Cixous, according to Murphy, sees that a human “is also at every moment a consumable animal” (52). Cixous is able to connect this event with a prior history of her family, which included being the target of insult and attack (which her dog suffered when it was chained outside). Cixous, an atheist, gets biblical declaring that “Job was that dog I am sure” (52). It is through this tearing of flesh that Cixous comes to understand that she “did not know what a dog [was], nor what being a dog is” (61). This leads to the passionate commitment towards the cat that came later in life. She states, “I am ready to give my life for my cat, but it was necessary that Fips should first have given his life for me” (53). This chapter is a powerful meditation on the limits of violence, humanity, identity, and love. It is this account that actually sinks its teeth into the often abstract question of how we draw the categories of animal, human, and divine. Though even here Murphy quickly reinscribes this image into a theology that does little to shift the balances of power at stake.

While this book may not succeed in overcoming our anthropocentrism (and I am not sure what that would mean or look like anyway), it does offer a tremendous resource in response to the scandalous lack of Christian engagement with the non-human. Further, it demands, echoing Derrida, that we be cautious when we assert too readily that we can fully know, never mind arbitrate, the dividing lines between animal, human, and divine.