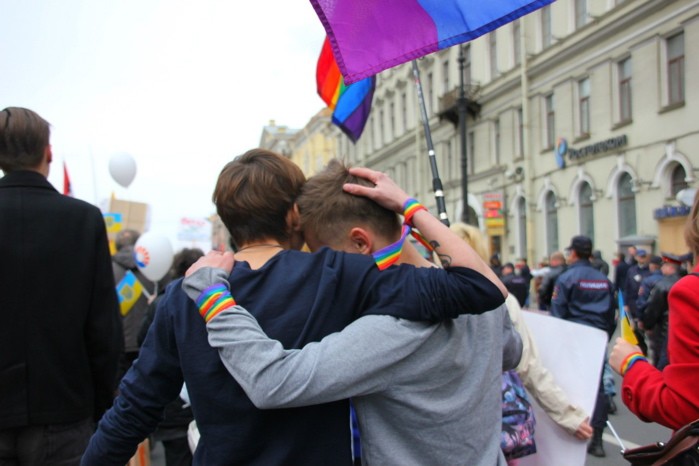 “Without an emotional, heartfelt grappling with the source of our own oppression, without naming the enemy within ourselves and outside of us, no authentic, non-hierarchical connection among oppressed groups can take place. . . . I am a woman with a foot in both worlds, and I refuse the split.” – Cherrie Moraga, 1979

As a vegan transsexual, I have found myself suspended between two worlds, two spheres of activism, two separate communities committed to justice and equality. I believe that the time has come to break down the barriers between these intrinsically connected anti-oppression movements. Naming suffering as our common enemy, I am proposing a trans-vegan alliance.

Trans people know what it is to be perceived as different, judged as inferior, and denied rights (or worse) on the basis of that difference. Yet we ourselves use this same corrupt equation to oppress animals. How can one form of oppression end without the other?

If I were to sketch a ladder of hierarchy – hierarchy being the structure and foundation of dominance and oppression – I would place trans people at the bottom. Or second to bottom, with non-human animals one step beneath. Certainly there are populations of people experiencing greater oppression in the world, but I would argue that even within those groups, trans people would be at the bottom.

I’m not emphasizing this point to be morbid. If I had that ladder of hierarchy before me as a real thing and had the opportunity to deconstruct it, where would I begin? Not at the top; those folks would least want change. I would go straight to the bottom – or rather, second to bottom – and urge those folks to be the first to step off the ladder by refusing to step on the ones beneath them.

So I appeal to people of trans experience: let us be leaders in ending oppression and collectively step off the ladder of hierarchy by refusing to regard any living being as beneath us, or as less deserving of life and quality of life.

In 1988, Marjorie Spiegel published The Dreaded Comparison, in which she painted parallels between human and animal slavery. In 1990, Carol Adams called for a feminist-vegetarian alliance in The Sexual Politics of Meat. Why should there not also be a trans-vegan alliance?

Years ago I studied philosophy at McGill University. In a class on contemporary moral issues, students researched and discussed the pros and cons of a wide range of controversial subjects. No subject came close to matching the level of controversy that arose over vegetarianism. No other subject was so personal.

At the time, I ate meat. I read all the material that was provided and concluded that every argument in favour of vegetarianism made sense. I admitted so, then said with a smile, “But I still like to eat meat.” This dismissive response to a profound ethical dilemma was summed up long ago by Tolstoy:

‘A man can live and be healthy without killing animals for food; therefore, if he eats meat, he participates in taking animal life merely for the sake of his appetite. And to act so is immoral.’ It is so simple and indubitable that it is impossible not to agree with it. But because most people do eat meat, people, on hearing the case stated, admit its justice, and then, laughing, say; ‘But a good beefsteak is a good thing all the same; and I shall eat one at dinner today with pleasure.’


Two years later I became vegetarian, but it wasn’t because I was presented with any new or better arguments. It was a shift in me. I had decided to look at where my meat came from, to let myself see, and that was the end for me. Shortly thereafter, I went vegan, coincidentally as I began my transition. At the time I didn’t think of the two as connected; now I see that they are. I was facing and responding to my own truth, and to the truths of others.

Before I looked into the eyes of a turkey being slaughtered, my approach to meat-eating was to reason it out, and where reason fell short, to offer no better defence than a laugh and a love of meat. After my perspective shifted, my approach and response to animal suffering was no longer analytical, it was immediate, intuitive, and I wanted nothing to do with it. I became a conscientious objector to suffering, which I wrote about in my article for Geez 12, The Activism Issue.

Ending oppression depends wholly on making that shift from an analytical to an intuitive approach to suffering, from reason that is detached from the heart to reason informed by the heart, sprouting “living tendrils of kindness . . . capable of crumbling a mountain of apathy,” to quote my mother, Franceen Neufeld, from her book Suffering Eyes. But what makes the shift? There is, as Blaise Pascal observed, “the greatest difficulty in making [it] felt by those who do not of themselves perceive [it].”

For years I have shared my journey as a female-to-male transsexual with schools and community groups. Every time I share my story, I see the shift happen. A roomful of stunned people, not daring to so much as laugh at my jokes, then hearing my story, seeing through my eyes, and understanding and loving me at once. It’s the most wonderful phenomenon.

That is the shift. I make no argument about transsexuality in my talks; I don’t need to and I don’t care to. But by inviting people to see through my eyes, the change happens.

We of trans experience are asking people to see through our eyes, and in seeing us, to understand us and love us. To ask this with integrity, we must be sure that we are not denying others what we demand for ourselves.

The objection has been raised that “trans people are dealing with enough already, they don’t need to deal with this also.” Indeed, but the things we deal with – inequality, suffering, oppression – are the very things that our response to animals would address. As a transsexual, I claim my dignity, I claim my right to freedom, health, happiness, life. As a vegan, I refuse to deny those rights to anyone else.

Trans veganism is key to ending oppression. As Plutarch noted, “Who could wrong a human being when he found himself so gently and humanely disposed toward other non-human creatures?” And with the appalling rate of suicides among trans people – as high as one in five – reverence for the lives of others would only deepen reverence for one’s own. Who could wrong themselves when they are so gently disposed toward others? Trans veganism is key to healing what ails us, on more levels than one.

If the trans community were to embrace veganism as fundamental to our liberation, integrity, and well-being, those “living tendrils of kindness” could take root and grow, broadening the scope and meaning of trans veganism, and ultimately crumbling the foundation and structure of hierarchy – from the bottom up.

Calvin Neufeld is a self-described speaker, writer, and thinker, living with his wife and two-year-old son in Perth, Ontario. Known for his talks on sexual and gender diversity, bullying, and suicide, Calvin is also the editor and publisher of Suffering Eyes: A Chronicle of Awakening by Franceen Neufeld (www.sufferingeyes.com). Calvin doesn’t consider himself an animal; he is one.