Community is the heart of nonviolence 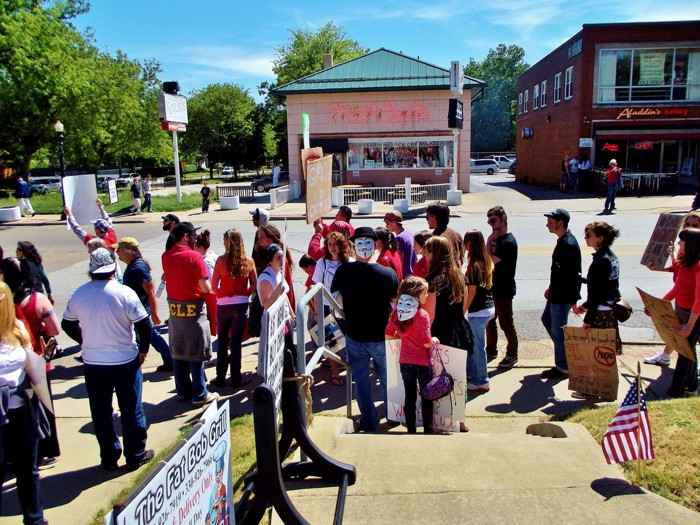 I am a recovering slacktivist.

I used to be a great admirer of activism, a reader of books and Wikipedia articles about nonviolent direct action. Yet I was not involved in the activist community in my area. Two years ago this changed, coinciding with new Canadian legislation for refugee settlement and protection. As a volunteer at a local refugee support group I became involved in letter writing, petitioning, brochure making, visiting with members of Parliament and a few protests.

After a year of protest and political advocacy we had the last big protest at city hall. It was a bit disorganized, but I was pleasantly surprised when over 100 people showed up. And then I noticed who had shown up: only the volunteers and supporters of newcomer-advocacy groups and those people I would stereotype as protester types. This got me thinking: what exactly does a protest do? What’s it for? On a deeper level I began considering the meaning of nonviolence as politics.

I began doing some serious digging into the story of Jesus, particularly his social, economic, historic – in a word, political – context. One fact stood out to me right away: whereas other would-be Messiahs took hundreds, even thousands, of their followers into desert places, Jesus never did. He went to the villages. His teaching was centred on how the villagers were supposed to treat each other, calling them to return to their ancestral traditions of mutual aid in a time when debt and oppression were literally starving them and leaving them homeless. Jesus was leading a revolution from below, bringing a renewal to community life that made the villagers both resilient in spite of their losses and resistant to oppression. Jesus’s teaching about creatively resisting enemies instead of retaliating against them took place in this wider context of communal revival.

Independently of this exploration I began to discover the fullness of Gandhi’s work in India during the early decades of the 20th century. Gandhi did not have a narrow understanding of nonviolence as an effective tactic against Empire. Rather, like Jesus, his vision and work were grounded in renewing village life in India. He chose to live an austere life, with simple clothing and an embrace of manual labour, in order to inspire the villages of the subcontinent to adopt a common lifestyle of simplicity, sustainability and self-reliance (as opposed to reliance on a colonial outpost or industrialism). The spinning wheel became a major symbol for him, a symbol not only of resistance against the British but also of the type of community life he sought to restore for his people.

The Civil Rights Movement, too, had elements of community renewal in its practices of nonviolent direct action. Reading Martin Luther King Jr.’s “Letter from Birmingham Jail” and essays about the movement made me realize that its protests were never directed solely at the white racists and their cruel institutions, as I had always thought they were. They were also directed at the white moderates – the people who didn’t care enough about racism to maintain it or to stop it. Nonviolent actions were meant to trouble uneasy consciences, to get people off the fence and onto the side of the marginalized.

In the stories of Jesus, Gandhi and the Civil Rights Movement, the revival and renewal of community played an essential, even foundational, part in the practice of nonviolence. In each story the community was suffering and needed cultural healing – restoration to full communal health where neighbours take care of each other, where the community can produce the things it needs and where the evils of racism and materialism are vanquished.

We need to get back to the heart of nonviolence – community life and its renewal. By all means we should continue to protest, petition and, when needed, make sacrifices in acts of civil disobedience. But we must never forget that protest is a defibrillator for the hearts of worn-out, burnt-out, fearful or hateful members of our community, not the thing that holds our communities together.

I still believe in the power of nonviolence as a creative force for a better world. I wonder what would happen if we focused not only on the political aspects of nonviolent action – protests, collecting signatures, talking to politicians and policy makers – but also on reaching out to the wider community to raise awareness and compassion for the plight of refugees? What would happen if we talked to churches, neighbourhoods, businesses and clubs and had them engage – on a communal level – with refugee issues? By doing this we would take seriously the foundational role of the community in any effort for social and political change.

Isaiah Boronka lives in intentional community in Kitchener, Ontario. He is working on a theology degree at Conrad Grebel College, University of Waterloo. He finds hope for a peaceful world in seeing simple kindness between strangers and people’s hearts open to their neighbours, down the street or across the world.