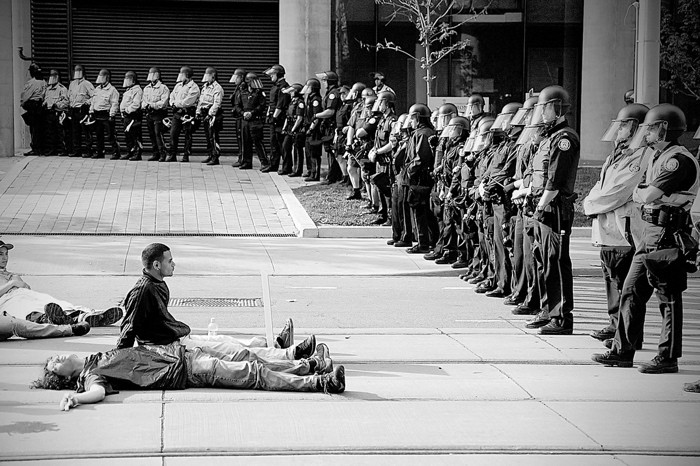 These days, only old men on TV do top 10 lists. Except for the TV part, the shoe fits. So, here goes, the top 10 reasons why there is hope for peace on earth and for my subsequent unemployment:

10. All countries belong to the United Nations and agree to conduct themselves according to the UN charter and international law, which forbid aggression except in self-defence, in matters of war and peace.

9. Even if countries lie and cheat on their UN commitments, public pressure and creative campaigns can prompt new legislation such as the Mine Ban Treaty (1997), the Rome Statute, which established the International Criminal Court (2002), the Cluster Munitions Treaty (2010) and the Arms Trade Treaty (2013).

8. History seems to record violence in great detail, but the actions of peacemakers that have prevented wars or stopped them from getting worse are rarely recorded. Despite this, civil society organizations have proven again and again that groups of people organized for a common goal can curb injustice and reduce the means of perpetuating violence.

7. The number of wars in the world has decreased more than 40 percent since 1999, and the number of casualties resulting from war in the last decade has dropped dramatically from the averages in all decades of the 20th century.

6. In my lifetime, the Berlin Wall fell without a cataclysmic encounter between the U.S. and the Soviet Union. Apartheid in South Africa ended without a bloodbath between blacks and whites.

5. There were over 60,000 nukes in the world in 1991, but today there are 17,300. No nukes have been used against real targets since Hiroshima and Nagasaki in 1945, and nuclear weapons testing has effectively stopped (except for the recent near duds in North Korea).

4. Cognitive scientist Steven Pinker has demonstrated that the world of the past was much more violent and that we are living in the most peaceable era yet. He explains that the emergence of strong governments with a monopoly on violence and increased trade links bring cultures closer together, as do literacy, urbanization, mobility, access to information and the tendency of the democratic process to resolve conflicts through political dialogue rather than violence.

3. The dramatic increase in the number of people leaving absolute poverty in the past 30 years, particularly in China and India, marks the slowing of the world’s population boom and resulting contests for basic resources.

2. As Abraham Lincoln and Martin Luther King Jr. both said (borrowing from Theodore Parker), “The arc of the moral universe is long but it bends towards justice.”

1. I believe in the fulfillment of the vision recorded in Isaiah that gives Project Ploughshares its name: “Nation will not take up sword against nation, nor will they train for war anymore.” Our work with others of goodwill on disarmament and peacebuilding is simply tracing the arc of God’s promise.

John Siebert is the executive director of Project Ploughshares in Waterloo, Ontario.