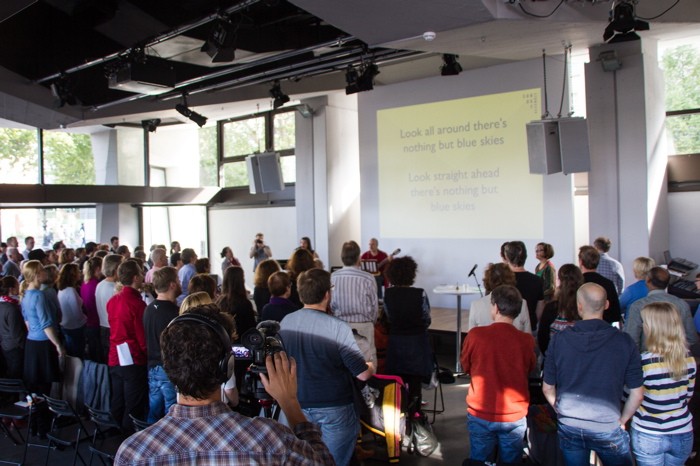 Could people who join a godless assembly be happier than those who attend an evangelical worship service?

The Sunday Assembly, a weekly gathering for atheists, has recently arrived in Canada from the United Kingdom and has essentially co-opted the church’s approach, except doing it without God.

“It really is all the best parts of church … but without the god part, religious text, scripts, or rituals,” said Keshra Hamalainen, lead organizer of Sunday Assembly Toronto, in an interview.

It started as a small group at a local pub and has evolved to 12 to 15 regular attendees since last Fall. The group meets for inspirational talks, singing, and to encourage charitable activities.

“I grew up in the church,” said Hamalainen. “After leaving I had no more community to go to on Sundays,” she said.

John Shannon is an atheist who has attended some meetings like Sunday Assembly and they have been positive.

“Many atheists are isolated from family – sometimes even from friends – for not believing,” said Shannon. “So it’s good to be among people who exist on the same plane of reality as you.”

Lucas Cooper is an evangelical Christian and the lead pastor at Toronto’s Bayview Glen Church. While differing theologically, he said the mission of Sunday Assembly isn’t far removed from that of Bayview Glen, which has a weekly meeting of about 800 people.

“What people may typically believe about church is they’re going to come and somebody is going to yell at them for an hour, and they’re going to feel guilty and go home,” said Cooper. That’s not what happens at his church, he said. “We have a whole lot of questions, too. And we want to create a safe space for people to hear about that.”

Cooper said nobody wins the comparison game. Nobody, believer or not, can be happy comparing themselves to others. He said church religious systems can be experienced as “prison, because it’s a game of comparison that you will never, ever win. If that’s what I was caught in, yes, I would be happier at the Sunday Assembly.”

Shannon, raised in a Pentecostal Christian home, wants to avoid the notion of happiness altogether and noted that there is no measure for happiness. Instead, he prides himself on being “peaceful.”

“No one is ever guaranteed happiness, any more than one is guaranteed hardship,” he said. “We get both in life whether we believe in god(s) or not. I’ve found greater ‘peace’ … in accepting the good and bad events as learning experiences and the blessings of being alive.”

Hamalainen, who grew up with the Jehovah’s Witnesses, said, “I’ve belonged to a church before . . . and I am happier at Sunday Assembly.”

Community, friendship, doing good, inspiring wonder – all these can be paths to happiness. Maybe it doesn’t matter where it’s sought.

Leslie Sinclair is a freelance writer who lives in Toronto.