Blessed Are the Consumers: Climate Change and the Practice of Restraint

Blessed Are the Consumers: Climate Change and the Practice of Restraint
by Sallie McFague
(Fortress Press, 2013)
A book review by Glenn Sawatzky 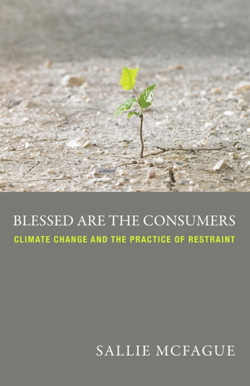 Sallie McFague has made a career of using theology to bring critique against our nature-denigrating, capitalist culture. Her most recent book, Blessed Are the Consumers: Climate Change and the Practice of Restraint, is the culmination of that career. The book is organized around the biographies of three Christian saints whose stories McFague uses as examples of restraint as response to injustice. John Woolman, Simone Weil and Dorothy Day all took drastic action to eradicate selfish desires to the point that their conception of self expanded to include the whole world, and perhaps especially its downtrodden and oppressed parts. Such radical solidarity, according to McFague, is what is needed in the face of the present ecological crisis.

Although the saints are the central figures of the book, the most impressive feature of Blessed are the Consumers is the theology that follows from McFague’s consideration of their lives. In a chapter called “Kenotic Theology” McFague uses kenosis – the giving over of the self for the flourishing of others – as an interpretive key for understanding God at work in the world. The incarnation, the cross, the trinity; all these point to kenosis as God’s primary way of being in the world. God is not a king-like super-being. In fact, God is not a being at all. God is an unending process of emptying whereby the self is given over for the flourishing of the other. The saints denied their egocentric selves to the point that that their self-regard came to embrace the entire world. Nature itself embodies this divine truth – all life depends also on death. God is kenotic. Thus if we are going to begin to grow toward God, we will have to start with kenosis.

McFague is always conscious of her audience, which she assumes will be made up of people like herself – affluent North American participants in the consumer culture of market capitalism. Thus her call to kenoticism is linked to her call to the practice of restraint in the face of rampant consumerism. Admittedly, there is some ambiguity regarding the link between kenosis and restraint. God, Jesus and the Saints may be useful illustrations, but what are the practical implications of their example for everyday 21st century participants in cultural capitalism? Are changes to our consumption patterns really on par with kenosis? For all three of McFague’s saints, voluntary poverty was the impetus for death to self. Is this what is being asked of us? Perhaps in some form. Fleeting suggestions that we “reconsider [our] use of automobiles,” and “really [let] go of all possessions” suggest that part of the kenotic project includes literally getting rid of things we formerly thought necessary. McFague may also be hinting at the need for release from dependence on unjust food systems, when, in a surprising paragraph, she chooses “food” as “a single word to [sum] up kenotic love.”

While concrete proposals for action may be lacking, Blessed are the Consumers nevertheless lays the critical groundwork for a functional, ecologically informed, 21st-century theology. For the directness of its approach and the clarity of its vision, it is a book that deserves the attention of anyone who believes (or wants to believe) that theology matters today.

Glenn Sawatzky is a master’s student at the Vancouver School of Theology in Vancouver, British Columbia.