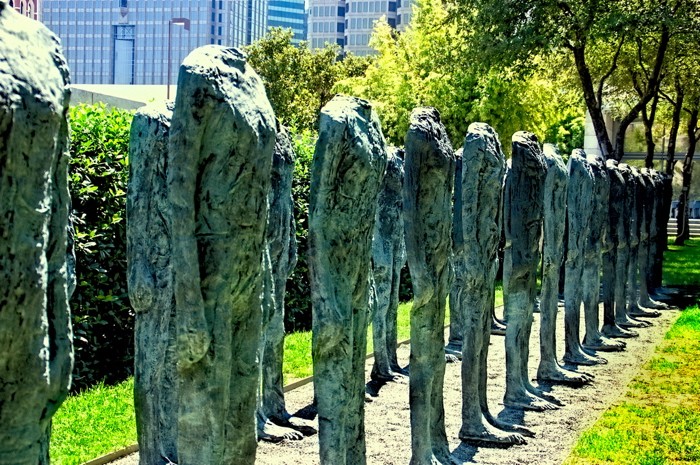 This bronze sculpture of a crowd represents the dehumanized masses as experienced by Magdalena Abakabowicz, a Pole, during the horrors of World War II. Closer inspection reveals that the statues are not identical.
Credit: phigits, http://www.flickr.com/photos/phigits/4044487136/

The term stereotype, in its modern usage, was born in 1922 in Walter Lippmann’s book Public Opinion.

But in practice stereotypes are as old as humanity itself, from the moment there was an “us” to be differentiated from a “them.” One clan camped out at the base of a cliff, drawing the imaginary line between the similar but separate clan across the savannah.

Stereotypes are related to an even broader psychological concept – schema (plural: schemata). Schemata are the mental frameworks we apply to the world, our very human system of organizing new information and knowledge. If I tell you I went to the doctor today, you won’t have to ask if I sat in a waiting room until the receptionist (female) ushered me into a smaller room, where I sat on a paper-covered padded table until a white-coated person (probably male) appeared and asked me to say “ah.”

Schemata filter down into stereotypes, which Lippmann described as “the little pictures we carry around inside our heads.” The pictures pop up when we hear words like cheerleader or basketball player, doctor or nurse, cop or protestor. It’s a shorthand we use when communicating with each other, made obvious whenever we qualify the labels we dole out in conversation. “He’s a gun enthusiast, but not in a weird way.” “She’s a hippie, but the kind who bathes more than once a week.”

In 1989, psychologist Patricia Devine studied racial stereotypes and found there are two levels of processing for them: automatic and controlled. Stereotypes arise in our minds unbidden. What happens next, though, is in our control. We can override that automatic response with a controlled process. But we can be too distracted or stressed to put those rapid-fire reactions through their anti-prejudicial rigours. We can be in afternoon rush hour and get cut off by a fellow motorist belonging to a group with pilloried driving skills, and we might not be successful at tamping back the impulse to add the experience as confirmation to our existing schema.

Stereotypes can seem so relatively benign that it’s easy to forget they can be deadly. We saw an example of this unfold in February when George Zimmerman shot Trayvon Martin. Martin was a black teenager who was staying with his father in the Florida gated community where Zimmerman lived. Martin’s presence, a dark-skinned male-bodied person wearing a hooded sweatshirt, was so threatening within Zimmerman’s schema that Zimmerman discharged his firearm and killed the 17-year-old boy.

This example is extreme, as are the additional stereotypes it involves: American as gun nut, American as racist. There are more subtle and unexamined stereotypes that play out in more systematic ways, with death again in their wake. Robert William Pickton managed to murder 49 women over two decades because our schema of “Downtown East Side Vancouver sex worker” is one that emphasizes drug addiction, crime and an otherwise marginal lifestyle over the fact that these women have family and friends who care about their well-being and whether they live or die. In Manitoba, women go missing or are murdered and their families march and hold vigils, and only rarely are charges laid, as they were in June against one man for the deaths of Carolyn Sinclair, Tanya Nepinak and Lorna Blacksmith. They were persons, not simple stereotypes of what we think Aboriginal women or poor women or vulnerable women are.

Activist Suzanne Pharr writes, “it is through stereotyping that people are denied their individual characteristics and behaviour and are dehumanized.” Dehumanizing is always a first step toward violence, symbolic or otherwise. Dehumanization is part of what allows killers to kill. You and I aren’t killers, but we have something in common with them when we are complicit in the verbal abuse of “slovenly, lazy” fat people by watching The Biggest Loser. Or when we, however subconsciously, use criteria like appearance, social class or education to determine whether another human is worth our time, conversation or eye contact.

Stereotypes have followed us from our ancient caveside beginnings to our modern existence. As Patricia Devine showed, they pop up whether we like it or not. We can try to whack them down, but they’re a lot more sinister than the moles in a carnival game. Writing about gay stereotypes in film, Richard Dyer said, “righteous dismissal does not make the stereotypes go away, and tends to prevent us from understanding just what stereotypes are, how they function, ideologically and aesthetically, and why they are so resilient in the face of our rejection of them.”

Stereotypes are resilient because they comprise the very structure of the human mind. And the structure that has allowed us to categorize and itemize so much information over the course of history has also created the pathways for oppression to rear its head, again and again.