The Happiness Myth: Why What We Think is Right is Wrong by Jennifer Michael Hecht (2007). This genealogy of happiness unpacks the historical contingency of satisfaction. Each generation has something unique (and fairly arbitrary) that makes it tick. Hecht’s advice for a more timeless happiness is unsurprising (love your family, appreciate art, and so forth), but it’s still a good reminder that much of what our culture shoots for is meaningless in the long run.

Made for Happiness: Discovering the Meaning of Life with Aristotle by Jean Vanier (2001). This is a book for anyone who doubts the relevance of Greek philosophers in the 21st century. Vanier, the founder of l’Arche, resurrects Aristotle’s ideas on friendship, pleasure, and justice to illuminate what gives meaning to our lives in a troubled world. It’s hard to think of a writer more genuine or trustworthy than Vanier.

The Promise of Happiness by Sara Ahmed (2010). A dense critique of the cultural imperative to be happy. Put simply, the failure of oppressed people to be happy is often seen as “sabotaging the happiness of others” (for example, when rich white folks complain about protests that disturb the peace). Ahmed argues in favour of the “feminist killjoy,” the “unhappy queer,” the “angry black woman” and the “melancholic migrant.” Read this book and you won’t enter a roomful of people the same way again: you will feel the strictures of a happiness script, keeping the peace for the privileged.

Glimpses of a Good Life: Rhythms and Practices that Invite Wholeness by Walter Thiessen (2013). A collection of unassuming wisdom from a counsellor and teacher who’s seen a lot of pain and joy. Consider it a handbook for a good life with something lovely on every page.

The Economics of Happiness, a documentary directed by Steven Gorelick, Helena Norberg-Hodge, and John Page (2011). For those who prefer televisual stimulation to the written word, this documentary (featuring interviews with Vandana Shiva, Bill McKibben, and others) is a useful primer on globalization and the importance of the burgeoning localism initiatives. It’s not flashy, but it’s helpful and on point. Great for group study.

“Get Happy!!” by Jackson Lears, an article in The Nation (November 2013). In this extended review of the latest “happiness manuals,” Lears eloquently slams the “how to be happy” publishing niche for its focus on individuals at the expense of communities and for appropriating pseudo-scientific research to make a quick buck. According to the happiness industry, “there is no such thing as society. There are only individuals, regulating their inner and outer lives in order to sustain and increase personal satisfaction.” He ends on positive note, praising the communal concern in How Much is Enough by the Skidelskys.

How Much is Enough?: The Love of Money, and the Case for the Good Life by Robert Skidelsky and Edward Skidelsky (2012). In 1930, the economist John Maynard Keynes predicted that, by now, we’d all be working only a few hours a week, with all our needs met. As it turns out, we don’t work for our basic needs, we accumulate stuff instead. In this book, the Skidelskys show what went wrong, and imagine economic structures that would provide for the basic needs of all.

Ethics of Luxury by Jeanne Randolph (2007). A difficult and quirky book for “those of us who live in the enclaves of luxury.” It’s one part aesthetics, one part psychoanalytic theory, and two parts anti-consumer manifesto. It asks: Why do we chase after the promises of advertising when they’re sure to disappoint us anyway? 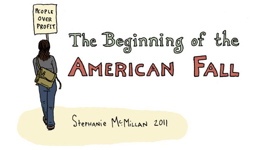 The Beginning of the American Fall by Stephanie McMillan (2012). This insider’s account of the Occupy movement flips the script on the American Dream, and adds a bunch of illustrations. It’s a landmark of comics journalism that points to the joy found in activism and resistance. How does it fit with happiness? Well, the more we understand the problems of the world, the more we’re capable of responding with care.

Cruel Optimism by Lauren Berlant (2011). Berlant demonstrates, using big words and dense examples, how our “unachievable fantasies of the good life” are misguided, and inevitably make us unhappy. A must-read for your next critical theory dissertation.

Regarding the Pain of Others by Susan Sontag (2003). How do we position ourselves in relation to others’ suffering? A highly esteemed art critic of photography, Sontag explores how images of pain do and do not affect our perception of wellbeing. We need to keep awake to others’ pain.

Zen and the Birds of Appetite by Thomas Merton (1968). Thomas Merton was one of the most well-known Christian contemplatives of the 20th century, but he was also deeply influenced by Zen Buddhism and other Eastern philosophies. A paradox is often a gateway to getting free of expectations that ensnare. This book, one of his last, makes the case that Christian mystics would do well to consider the wisdom of Zen.

The Tao of Pooh by Benjamin Hoff (1982). A charming introduction to the tenets of Taoism, animated by the residents of the Hundred Acre Wood. While Eeyore struggles to be, and Rabbit overcomplicates the simplest of tasks, Winnie-the-Pooh is unburdened and content. It’s an unassuming metaphor for enlightenment, or the key to maintaining a non-anxious presence. If it wasn’t obvious already, A.A. Milne was a genius.

Yes! (1997- ). We find this quarterly magazine is stubborn in its cheerfulness (one recent headline reads, “The Senate Just Voted to Keep Big Money in Politics. Three Reasons to Celebrate Anyway!”) but it’s still one of the best social justice magazines around. Consider subscribing if you’re an activist who needs to feel good about where the world’s headed.

The Places that Scare You: A Guide to Fearlessness in Difficult Times by Pema Chödrön (2001). This most self-helpy item on our list teaches you to transform your fear through mindfulness and contemplation. If that sounds a bit new-agey, it sort of is – but it’s also practical, grounded, and rooted in ancient spiritual wisdom. Hint: be diligent at keeping a soft, open heart.