How to walk in the city 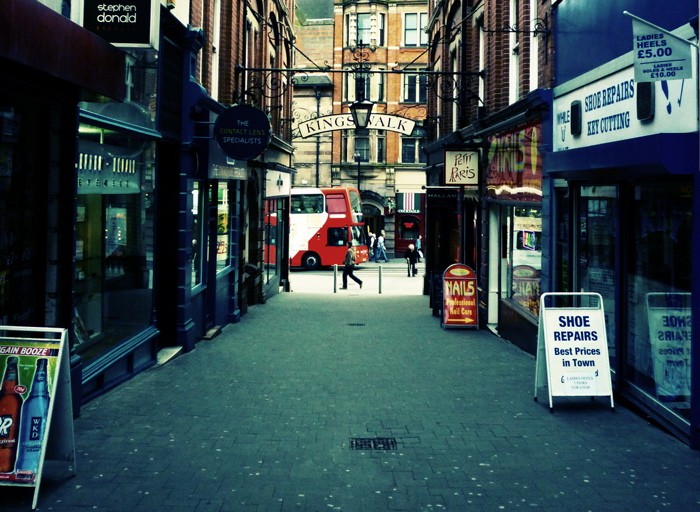 A dérive is not a stroll.

It is a journey through an urban landscape inspired by a curious mixture of intention and aimlessness. A dérive (pronounced deh-REEV) has no destination. Its goal is neither work nor leisure, but rather to pay attention to the influences of one’s constructed environment.

I began my own dérive at the University of Winnipeg. There I locked my bicycle, emptied my bladder and set out on foot to follow the city’s lead.

This was a new adventure for me. I only recently encountered the concept of dérive in the writings of Guy Debord. He belonged to the Situationists, a group of Marxist revolutionaries who roamed the streets of Paris in the 1950s and ‘60s searching for new and authentic ways of interacting with their built environment. They sought to defy the capitalist order and create their own experiences of reality.

Portage Avenue sucked me in. Tributaries of cars and pedestrians emptied into this river of traffic. The corridor of airspace between the buildings and above my head hung thick with signs, billboards and digital screens. I read them all. Written words hold a strange power over me; I am incapable of looking at a word without reading it.

“Cities have psychogeographical contours, with constant currents, fixed points and vortexes that strongly discourage entry into or exit from certain zones,” Debord wrote in 1956. I was curious about the features he described, but unsure how to see them. I couldn’t decide if I should be breaking the rules or following them.

As an experiment, I entered a parkade and walked up the curving ramps strictly reserved for cars. I felt resentment mount in me as I climbed, stepping aside to let cars pass. I was trespassing in a landscape built for citizens of metal, glass and rubber. From the parkade rooftop, I could see this preference built into the city below. Downtown is a grid that favours creatures with gleaming exoskeletons and appeases their hunger for speed and efficiency. Pedestrians fill in the cracks.

I returned to the street and kept walking, resisting straight lines and right angles. I walked in arcs, zigzagged across streets, backtracked. I became uncomfortably aware that I was behaving like a deviant. Panhandlers, drunks, graffiti artists and skateboarders travel like this. Our grid makes it easy to spot their unwelcome movements.

Debord encourages dérivers to invite the unexpected by striking up conversations with passersby. Near a parking lot I met Roy. He carried a sketchbook and, like me, appeared to lack a destination. (It’s an easy deficiency to spot). Roy was an artist; he offered to do my portrait.

The wrinkled skin around his eyes made two melancholy triangles. “Two hundred,” he said.

Roy wasn’t insulted; he was eager. His $20 minimum forgotten, he began to draw me. He glanced up from his notebook periodically with quick jerks, shook his head, swore and laughed. “I can’t do it,” he said finally. His pad was covered in loose scribbles. I could see the alcohol in his blood was hampering his fine motor skills. When I shook Roy’s hand and said good-bye, his shoulders sagged. “I wish I’d had more time,” he said.

The river, high, brown and foaming, was the first natural obstacle to block my path. I didn’t even know its name. I followed a footpath behind a cluster of apartment buildings into a leafy thicket along the riverbank. Even in broad daylight I felt a twinge of apprehension. Danger lurks in unmapped pockets like these. As branches closed around me I wondered how green, flourishing leaves could conjure such fear.

When I emerged from the forest I checked the time. I had been wandering for three hours without experiencing a moment of boredom. I was surprised at the pleasure I’d found in the excursion. I rarely leave the house without a destination. Most common forms of recreation come with clear objectives: score goals, get fit, get drunk, relax, learn a skill, build a relationship. Perhaps our society has lost its ability to wander.

As I headed home, now moving resolutely, I met a woman who walked with a spastic shuffle. She smiled at me as we passed – a magnificent, gap-toothed grin. She must be a touch crazy, I thought. Only crazies smile at strangers for no reason.