We’re not meant to go that fast. It’s just too hard on the spirit. So I quit air travel. Planted my feet on the ground, tuned up my old bicycle and set my conscience at ease.

First it was a relief. Then it became an adventure.

The point is not that my choice to remain earthbound is right, realistic or even noteworthy (it’s nothing that billions of others aren’t already doing – and there is something right about keeping such company). Rather, the point was somewhere between Crestone, Colorado and Abiquiu, New Mexico where I pedaled into the realization that lifestyle change and spirited wanderlust are one.

It makes me want to revert to that churchy form of language that slyly creates a bit of room to boast: the testimony. You speak excitedly about what pleases you most in your life, and dodge conceit by attributing anything laudable to the great beyond. I think I might be able to pull it off.

Because when I trace the change – the point at which I finally ended up acting on stale sentiments about high-speed gas guzzling – back to its source, the path becomes almost too vague to follow. There are factors that influenced me – like time spent with indigenous people violated when their homeland in northern Canada was turned into an oil patch, or the time someone told me my first transcontinental flight used up my lifetime’s share of carbon, or the inspiration of friends who parked their car for a year, or the old man who showed me that heaven and earth are overflowing with grace – but in the end there was no decisive moment of pure volition; no point at which sheer moral compunction overpowered whatever it was that kept me booking flights.

It’s more like change strolled up to the front door of my being and pulled a prank while I was out. I got home and I was cobbling together used bike gear and training for a ride to the Colorado monastery I had long dreamed of visiting.

And there I went. Out of my idealistic inertia was born a solitary, rookie nomad rolling through a little old town on the open North Dakota prairie.

It was probably the adventure of a big unpredictable bike trip that ultimately made me do it. Aside from any noble ideals, I’m a sucker for adventure, and conversion is, in its essence, just that. The what’s-around-the-next-bend adventure plays out as something inside stirs. In the end they become inseparable.

I was intrigued by the notion that a big ride was bound to have some impact on my inner make-up. I sought to maximize that.

I internalized the pedaling, imagined my soul centered in my legs. I pedaled a prayer for indigenous people in the oil patch. I let myself really feel the tough stuff – wind, lonely nights, the frustration of mechanical incompetence, pain. And I soaked up the good stuff – downhills, wild sky, middle-of-nowhere (and everywhere) cow pasture “campgrounds”, the Sangre de Cristo Mountains, sweat, small town cheer, the pedals under my feet. I was experiencing change.

Compared with flying I wasted weeks of travel time – and it was worth every grueling glorious minute.

Since then, I’ve done other long-distance bike commutes and daily short ones. A few times, remaining earthbound has been an inconvenience, but an instructive and possibly redemptive one. For the most part it’s a big relief. I may fly again some day, or I may not. I’ve almost let go of the Africa dream. We’ll see.

The moral of the story is adventure. It’s not that I became a novice practitioner of mobility ethics, but that the whole notion of spirited lifestyle change took the form of adventure. I was eager to embark not only on the next overly-ambitious trip but on other lifestyle experiments.

Such as the changes yet to come. The further ruralization of my life. The reduction of stuff. The reduction of computer-dependence. Closer contact with the poor. And a few others I’m too shy to mention. I’m not sure how or when these transformations are going to happen, but I look forward to the ride.

Will Braun is editor of Geez magazine. This article first appeared in the fall 2005 issue. 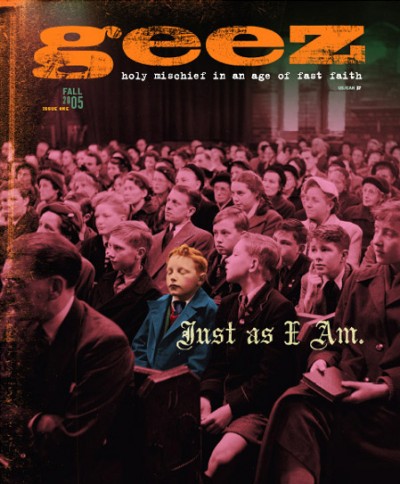 This article first appeared in Geez magazine Issue 1, Fall 2005, Just as I am..