Confront ‘those in power’ with compassion

I developed a scarey affinity for the courage of martyrs as I worked on this issue of Geez. I come from the land of power and have found no easy exodus. Even voicing my opposition seems risky.

If I say that Those in Power have too much wealth, influence and control, and if I resist in a way that exposes their contradictions, I fear my safety is in jeopardy. For example, it’s a contradiction when they suppress free speech to maintain democracy, as they did at the G20 summit in Toronto last June. For a moment, they exposed the repression of resistance that is present everywhere. This is not new for populations around the world, but it feels new for me, a reluctant upwardly-mobile, North American peace- and justice-seeker.

Who are those in power? I think of the men and women at the top of the largest corporations (some of these are from my own Mennonite faith tradition). I think of big business decision makers who treat workers like machines and regard them primarily as a resource. I think of directors on boards who consider profit alone as a guiding motive. I think of lawyers who knowingly exploit legalities for the gain of the few over the many. I think of government officials who are seduced by the lure of commercial investment at the expense of democratic erosion. I think of the titans of retail, the people who buy the creativity (is this not the soul?) of our most talented artists and writers and chain them to the task of distracting the masses from the iniquity of our consumer behaviour. I think of the high priests – Christian preachers and best-selling authors – who neglect the material ramifications of the gospel, spiritualize our condition and thereby bless our inequities.

This is an ugly side of my European Christian capitalist heritage. I come from the land of elites. I have been schooled for success in this system; now what do I do with my power? I have seen the contradictions. Now I wince as I take small steps of solidarity with those on the underside.
If I commit myself to the path of non-violent resistance, I see a new horizon that involves conflict, imprisonment, or worse. If I speak out against state-sanctioned violence, do I not also become a target of that violence? I hope not.

What does this mean, “state-sanctioned violence”? Well, I’ll choose one example from my own insignificant city: A young man was downtown at 2:00 a.m. when he stopped his car in a 7-Eleven parking lot to call his girlfriend. He was black, behind the wheel of her Cadillac. When police officers confronted him, he felt threatened and wanted to record their interaction with his cell phone. They grabbed his phone, twisted his finger, and, when he cried for help, they punched him and called in more police cars.

After rummaging through the car, they left. Later, with the help of a friend and writer for Geez, he filed complaints, but received no admission of wrongdoing. A police spokesperson said they were investigating a call .

The violence of these men in uniform, the legislation that gives them the power of discretionary brutality (discretion often based on skin colour), the endorsement this violence receives in media reports and programs, is unacceptable. And if I speak out against it, I feel nervous, so nervous I have to ask a media lawyer about libel and free speech.

Is this the gospel of peace? Telling of state-sanctioned violence?

Walter Brueggemann, in his book, The Prophetic Imagination, says the naming of the lament of the people is an important prophetic role. To hear the cries of those who suffer violence is already a sign of hope for release.

Let people of peace acknowledge the acts of violence among them; let people of faith, such as those of us who call ourselves Christian, do as Jesus did and confront the mob mentality that sought to stone a woman to death.

I happen to be an editor, presented with stories of violence. In the pages that follow I share them with you in the hope of peace and liberation.
I wish the solution to the problem of violence would be as simple as identifying the bully and placing him in quarantine. Alas, this participates in and perpetuates the bully mentality. The administration becomes the new “tough guy,” and protects the interests of dominant groups.

I resist the perception of the world as a place full of aggressive, self-interested people. This inclines me to cower, to build a fortress around myself, to find reasons to see others as threats.

I prefer to see the brokenness of the bully, of those in power, and hope for their redemption through the creation of a reconciling community. This is the difficult way of peace. It is naive to think that those in power would abandon their privilege and align themselves with the material needs of the masses. But I am one of those in power, and I recognize that this might be a better way. 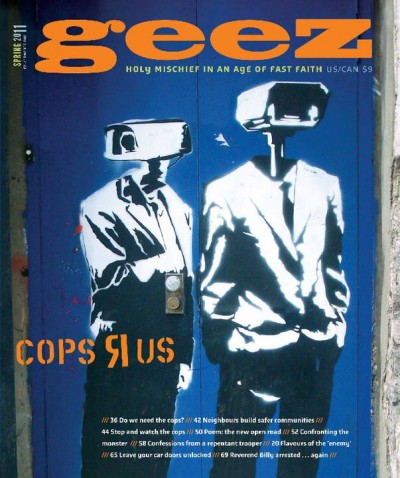