When Justice is Illegal: A Letter to My Nephew 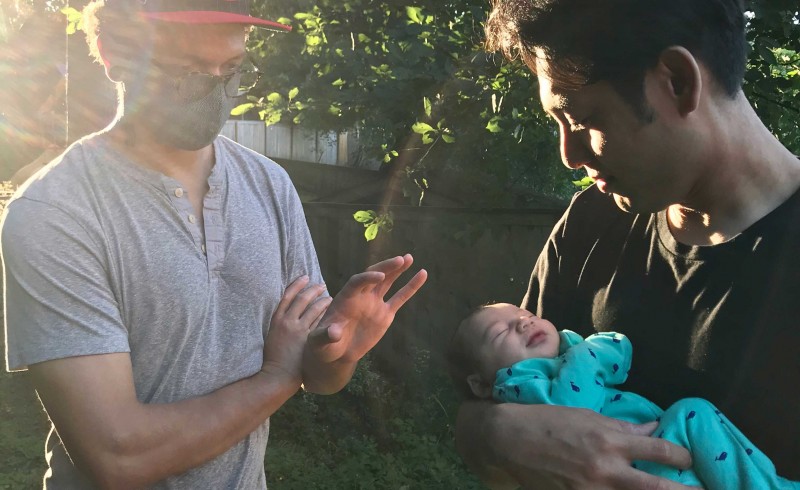 Whatever context you read this letter in, know that the story of your family’s perseverance provides a political vision for a more perfect society.

Geez Out Loud · When Justice is Illegal: A Letter to My Nephew

Hear the sirens covering distance in the night
The sound echoing closer
Will they come for me next time?
– “Sirens,” Pearl Jam

I am writing this on what should have been Tamir Rice’s 19th birthday, just days before you will turn one. Tamir Rice only celebrated 12 birthdays before being gunned down by a cop at a playground. I hold a vivid memory of his death. It is my waking nightmare.

A better memory is when your tita and I first met you two days after your arrival. Death had chased us that year unlike any year prior, so it was good and right to celebrate a new life that day. But I must confess, when I initially saw you, there was a fear that struck me. But then I saw your father holding you. I looked at your face, stretched out my hand, and did something I don’t do; I prayed.

I did not pray to God. God cannot hear me; I cannot hear God. So, instead, I prayed to you.

The fear that almost annihilated me was a fear of the world in which you were born into. White supremacy dominates that world, which is why cops shooting babies at the park is a “natural” occurrence. But I hope when you read this, that thing which our society has been structured upon – the thing that has hunted and haunted your ancestors in this hard land – has been supplanted by a society structured around justice.

To reverse Cornel West’s maxim, perfect love, in a social setting, is called justice. Social justice and love are synonymous and a necessity to human existence. To love perfectly may seem, at times, to be a Herculean task. If you begin to feel that weight upon you, consider the interconnectedness of all living things and that every righteous act, no matter how minuscule paves the way for perfect love to emerge victorious in our society.

But victory mustn’t be an excuse for forgetfulness. So, I am writing to relay the story of how your family’s embodiment of perfect love gave them the guts to persevere against the white supremacist lie that names a person “illegal.”

This story is so important that your family has authorized me to share it with those who are struggling to dismantle white supremacy. I specifically want to meditate on the trials and tribulations that your Lola, Lolo, pa, and his two brothers endured so they could be called “legal” in this land. And while it is true that you and I are not genealogically related, we are family because your grandparents and titos have lured me in with a hospitality that imagines there’s enough rice, jokes, and blues to go around. Not unrelated to the blues, they’ve taught me that perfect love does not necessarily equate to perfect decision making.

In 1984, your Lola and Lolo left the Philippines to make a one-way trip to the United States of America. They procured tourist visas with false names. They knew what they were doing was “illegal.” They decided to risk it. To borrow a phrase from Lolo, they “walked barefoot through the jungle” that is the U.S. immigration system. They were thinking of you.

Here you may ask, why? The first part of the answer is that they believed in the “American dream.” Namely, that the dream of “life, liberty, and the pursuit of happiness” is the greatest inheritance a parent can offer to their child, and goddammit all if the only barriers to that inheritance are fictitious borders and porous laws. As a Black American, I’ve never known the American dream; I’ve only ever known it as “the American nightmare,” as Malcom X described it. The second part of the answer is informed by Malcolm’s prophecy: On what authority does the United States determine what is legal or illegal when the founding of this nation was premised upon robbing Indigenous people of their lands and African people of their freedom? A variation of this question is simply, “Who’s to say who can or cannot belong in this country?”

While your grandparents were ultimately successful in finding work, making a home, attaining birthright citizenship for their three boys, raising them to become men, all while maintaining their Filipino identity, they’ve all endured great suffering for the crime of breaking a law out of a commitment to perfect love. That suffering is traced back to a single, haunting fear: family separation. Your pa and titos described this haunting fear in this way: being “illegal” is like being a ghost that everyone is trying to cast out.

The constant fear of your grandparents and their three sons being torn asunder through the unholy exorcism of deportation instilled in them a deep bitterness toward injustice. I would not use the word “tough” when describing your family, especially your Lola, but rather I’d use the descriptor battle-hardened – as they all knew being bitter about injustice paled in comparison to persevering under the long nose of Uncle Sam (no relation).

Your grandparents’ decision to enter the United States illegally demonstrated a greater understanding of justice than all of the nation’s “founding documents” combined. I envy them because of this. But I wonder sometimes if I envy them because I, like them, hold a perfect love within me, or if it is simply because my hate for this country burns hot. There are moments I worry that white supremacy has ruined me. But perhaps my moment for making dubious decisions out of an opposition to injustice and in allegiance to perfect love is yet to come. I’m staking my politics on that hope.

Whatever context you read this letter in, know that the story of your family’s perseverance provides a political vision for a more perfect society. From where I sit, it is likely that dismantling white supremacy will continue to be a primary task for your generation. It is even more likely there will be hard decisions made along the way before perfect love abolishes white supremacy. Ask anyone from the family: the incremental move toward justice is grueling. It took your grandparents over 30 years to receive their “Resident Alien” status, and there were many times when grief almost swallowed us whole.

When that sort of grief gets you tongue-tied, and you are confronted with the terror that there are neither angels nor demons, when your hunger and thirst for justice makes you a noisy cymbal that refuses to submit to the authorities, know that I will meet you in that rough valley and, with or without God as my witness, we’ll make dicey decisions together. And if I’m able to help you out of that jam, then I pray to you that thing I prayed silently all those years ago: Nephew, I pray you call my love perfect.

Josiah R. Daniels (Black/white) is the assistant opinion editor at Sojo.net. Although he is neither a musician nor a detective, he would classify his writing style as both “hard-bopped” and “hard boiled.”