We Walk in Different Worlds 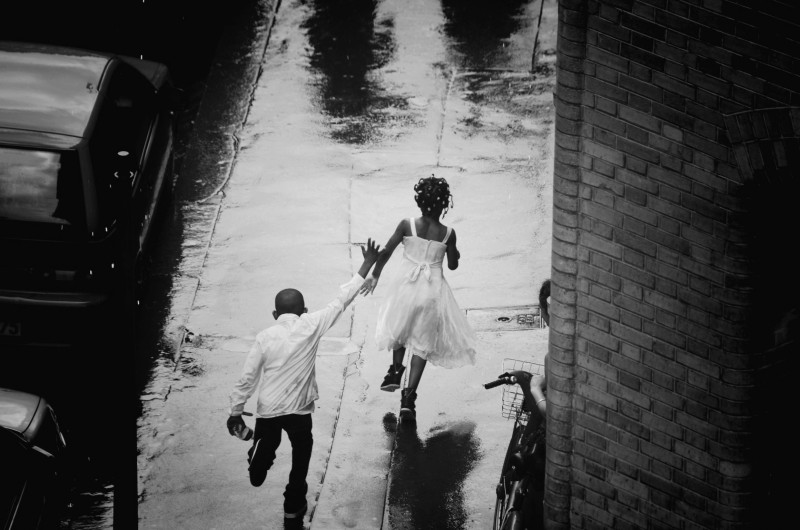 My little girl is incredible.

She’s two years old, wearing her pink kitty dress and light-up sneakers and running down our street as fast as her little legs can carry her. She’s laughing with delight and her face is lit by a halo of hair that defies gravity, coiled and textured and free. She’s so joyful – she’s the embodiment of many ancestors, many generations of wisdom. As her mother, I want to preserve this carefree child forever, to make the world safe for her. But she’s been born into a world where systemic, white-supremacist, and patriarchal hierarchies place her in immediate psychological, emotional, and physical danger, simply for existing. And I, a white mother of a black child, have been conditioned to be her greatest oppressor.

Few oppressors see themselves as oppressors, as obliviousness is something that’s built into privilege and power through early conditioning. The first years of our lives are the most formative for brain development – this is when social values create neural pathways in our brains, manifesting as thought patterns that provide an overarching story about our place in the world. White supremacy and patriarchy both function by perpetuating false narratives of dominance and otherness, and by repeating this messaging again and again as it digs synaptic tunnels through our unconscious minds. Consequently we become complicit in a system of exploitation that normalizes oppressive values in our day-to-day interactions. In both intent and practice, these systems of domination limit our potential for love and connection.

One of the narratives that I’ve been conditioned to believe is that white women are society’s default position for beauty, grace, and virtue. Advertisements for beauty products and cinematic damsels in distress have taught me a lot about my assigned role in the social hierarchy. And I have rarely seen nuanced representations of intelligent, unique, and vulnerable black women in the media – instead I’ve seen false tropes like the loyal mammy, the sexualized Jezebel, or the sassy/angry black woman. This is because historically, white supremacy has exploited black women for their labour, reduced them to their bodies, and moralized their reactions to pain.

This is part of an insidious, persisting narrative that black women are somehow less than human. This narrative persists because we have been taught to listen to the stories of people in positions of dominance and to disbelieve people who report experiences of oppression. The consequences of this narrative are very real and often deadly: my daughter is seven times as likely to be expelled from school, twice as likely to give birth to a low birth weight baby, and four times as likely to die in pregnancy-related complications than her white counterparts. Imagine that: from birth through motherhood, the ability to flourish is a privilege reserved for those whose skin colour and hair match the projected ideal.

A friend told me that in her experience as a black woman, she has been conditioned never to take up as much space as she deserves. Her potential is consistently limited by systemic and relational interactions – she is often not believed when she talks about her experiences, her hair is touched without permission, and she is called angry when she states her truth. This shows me that my daughter and I will always live in different worlds – I’ve been conditioned to take her space and to suppress her humanity in subtle yet incredibly painful ways. Through my obliviousness to my own conditioning, I am bound to enact white supremacy’s ubiquitous, suffocating dominance.

Black women and girls deserve better, and I am accountable to actively identify and alter my own oppressive neural pathways. I watch my sweet girl as she runs around in her kitty dress, her shoes casting flickering shadows with every lit-up step, and her hair raised in exaltation of her own divinity. I cannot completely shield my daughter from danger but I can always be in solidarity with her. And so it is: we walk through the injustices of this life hand in hand, loving each other radically, rebelliously, and universally.

Amalia Judith Nickel is a writer, educator, and digital content producer from Vancouver, British Columbia. Written in consultation with Cicely-Belle Blain (founder of Black Lives Matter Vancouver) and Marcel Daly (father of her daughter). Her most treasured memory of both of her Mennonite grandmothers is baking and eating bread with them – brown bread, cinnamon buns, easter paska, and white buns.