When I’m out and about among other humans, I feel an immense amount of hatred. I think that most people are obnoxious idiots and need to put down their cell phones, shut up and pay attention. And my definition of a brat? Any child I did not personally give birth to. The world could be a perfect place if the rest of the human race besides a chosen few and me were taken away by rapture or a zombie apocalypse.

I grew up in the 1970s and the only thing I knew about utopia was what I’d seen in bad sci-fi movies. In a perfect society, everyone old would be killed off and everyone left would have to wear matching silver jumpsuits. I never much worried about which group I’d be in, but the thought of not being able to choose my own clothes? That was terrifying. Now that I have passed an age that would secure me a spot as one of the young people allowed to live, this sci-fi notion of perfection is even more frightening.

As if that many dumb young people would be able to sustain a society. Have you seen how they can’t count your change back to you and think they are too good to leave voice mail? They deserve to be attacked by zombies.

Until the zombie apocalypse happens, should I search for my own utopia? From an outsider’s perspective, I suppose my life couldn’t look more ideal. I eat cookies that cost as much as it does to feed an African child for three weeks. I have paid others to laser me, wax my girly parts and cut my toenails. I could not be more removed from my food. Where it comes from, who grew it, who cooked it – it’s all a mystery to me. I just show up, order and eat. I’m only terribly inconvenienced when I have to reheat my own leftovers.

Since I married the Pastor, one of the many perks is that I’ve gotten to see the world while on the travelling preaching-and-teaching rodeo. I’ve stayed in a jillion different hotels where I manage the Pastor and throw towels on the floor. You should see how mad I get when they don’t have good wireless internet or a coffee shop. If there were a better place out there, I would have seen it. 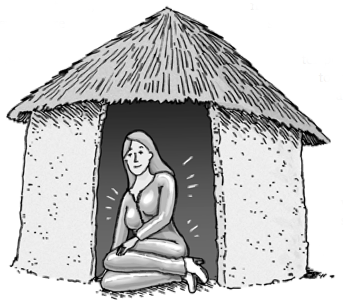 At the end of 2011, I found myself looking back through the photos of everything I’d done that year. I saw the food I’d eaten and the places I’d been. I didn’t feel good about it, not one bit. I felt like a huge, gluttonous pig – so big that I’d never fit into one of the silver jumpsuits of the future human race. I had pictures of good moments, but in my heart I knew it had been one of the worst years of my life. I realize I have no perspective here. I’m not a starving, AIDS- sickened African orphan, but still it was a terrible year for me. The baby I’d lost, the months my husband was away on a fellowship and I wasn’t sure our marriage would make it, an extended family crisis, the writer’s block I’d suffered, teaching a teenager to drive, the 15 pounds I’d gained. . . blah blah blah. I feel like a terrible person for even writing these things, because I know what I consider to be a horrible year would have been someone else’s utopia.

If there’s anything I’ve learned, it’s that maybe I’ve got it all wrong. Maybe the good life isn’t cookies and shoes and nail polish and an endless supply of fancy panties and false eyelashes. Maybe I’d be happier living in a mud hut among African orphans, or wearing a silver jumpsuit.

Even my resolve to change and be a better person seems so feeble. “I’m going to stop buying new clothes.” This is an option for the affluent, while someone in India has cancer from the chemicals used to make textiles. Or someone in Cambodia has worked long days in a sweatshop so I can wear something trendy for one season.