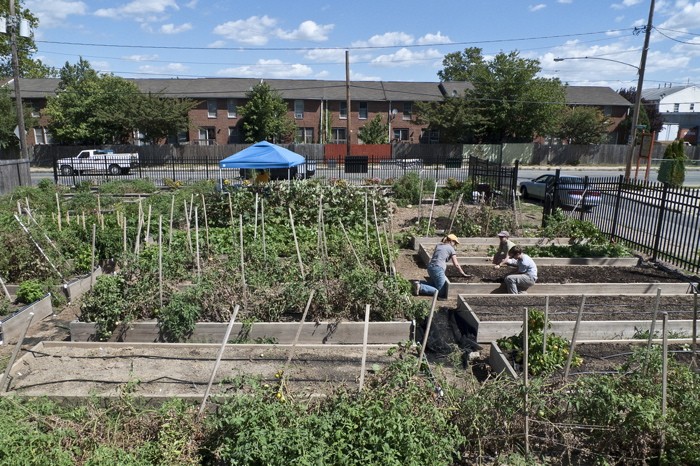 Escaping the intensity of City Heights living – the noise, the people, the cars – is no easy feat.

But middle-aged Rafael Mendoza has found a calm, quiet place in the middle of the city this early evening at New Roots Community Farm. He patiently waters a modest plot thick with tomatoes, melon, corn and squash.

Rafael spent his childhood in Sinaloa, Mexico on a many-acre homestead where he learned the art of subsistence farming from his parents. Since arriving in the United States 12 years ago, however, he had yet to put trowel to soil. Instead, he worked hard as a carpet cleaner with America’s Finest Carpet Company, living first in Los Angeles before moving to the immigrant-rich community of City Heights, San Diego. One of the founding members of the New Roots farm, Rafael has been gardening there since 2009.

The dozens of vegetables ripe for picking will be too much for him, his wife and three children to eat. And so they share the bounty with family, friends, and neighbours. There is contentment in his eyes as he waters tomatoes grown from seeds on his own small piece of land in the place he calls home.

We spy the oil behind the push for democracy, we cringe at the construction contracts behind the war on terror. Our leaders teach us that the precious notion of utopia can be yet another jaded trumpet beckoning the nation to battle. Achieving world peace and ending world hunger become chimeras that steepen our disbelief in any alternative vision for the future.

We routinely confuse ourselves, the created, with the Creator. This presumptuous role-playing gets us into trouble, especially when it comes to imagining and acting on our visions for a better world. Our admirable drive for unity and significance is so easily perverted into the self-idolizing desire to “make a name for ourselves,” the same impulse baked into the bricks of the Tower of Babel.

The political and economic remedies of the twentieth century devastated the poor, luring (or forcing) them to cities to trade their labour for food that did not satisfy. Today the federal budget waddles on, indifferent to its bloated, militarized gut. God responds now, as to Babel, by humbling and scattering us to labour on human-sized and grounded projects instead.

These smaller human creations retain divine potential, because each of us – rich or poor, “documented” or otherwise – bears God’s image with us wherever we go.

Take the City Heights farmers’ market for example. Here public space is cultivated for spontaneous chatter and intriguing sights; fruits and vegetables are invited to re-inhabit a food desert; and food stamps serve as welcome currency. Here is cause for hope in all its language-confusing, culture- clashing and community-building diversity.

A few miles from these colourful market stalls lies the New Roots farm. Two forgotten acres of city land wedged between streets and an ignored creek have become home to a thriving agricultural oasis run by 80 Somalian, Vietnamese and Mexican immigrants and their families. These newcomers lead the way into greater appreciation of the places we take for granted.

Maybe the poor such as these most closely embody the father in the parable of the prodigal son (Luke 15:11–32). The rest of us have squandered our inheritance on M1 Abrams tanks leading us into misguided military adventures. Many Christians find heartening the promise of a heavenly banquet at which all will finally be reconciled and filled. Perhaps such life-giving fare, in this time and place, can only be tasted in a Mexican-immigrant-planted, lovingly watered, juicy tomato grown on recovered land.

Colin Mathewson is a San Diego native and Stanford graduate who served as a program officer for a family foundation in City Heights from 2007–2009. He and his wife Laurel are now seminarians in Sewanee, Tennessee, in the ordination process to become Episcopal priests. He can be reached at colinmathewson [at] gmail [dot] com