What draws me to Jesus is the way that, in the diverse stories we have about him, he invited his disciples over and over again to be on the journey of transformation. He challenged them repeatedly to turn away from dominating forms of power and instead choose love and forgiveness and non-violence and grace.

Living in the Shadow of the Cross: Understanding and Resisting the Power and Privilege of Christian Hegemony
by Paul Kivel
New Society Publishers, 2013 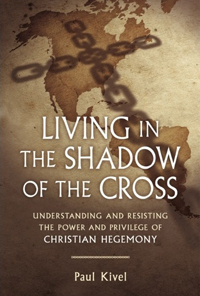 What do post-Christendom and the “War on Christmas” have in common? They both acknowledge that Christian authority is being challenged in the Western world. For the post-Christendom camp this is a welcome change, since Christianity has been severely compromised due to its collusion with empire throughout history. For those concerned about the War on Christmas, it is an affront to their faith and their understanding of what it means to live in the United States.

In his book Living in the Shadow of the Cross: Understanding and Resisting the Power and Privilege of Christian Hegemony, Paul Kivel challenges readers to deepen their analysis. Deeper than post-Christendom and the War on Christmas is the massive system of Christian hegemony. Whereas the former ways of thinking acknowledge that norms are shifting, an awareness of Christian hegemony unmasks the framework that created and perpetuates the norms.

Kivel defines Christian hegemony as “the everyday, systemic set of Christian values, individuals and institutions that dominate all aspects of U.S. society,” (3).

Although there are some shifts away from dominant Christian norms and control in the United States (challenging the Ten Commandments in courthouses and bans on gay marriage), Christian hegemony is infused into the institutions of this country at such a deep level that people don’t need to claim Christianity to perpetuate it.

In the book, Kivel focuses on the oxymoronic reality of “secular Christian dominance” in the Western world. In other words, “Christian dominance has become so invisible that its manifestations even appear to be secular,” (5). Part of the reason why Christian hegemony is so hard to describe is because it’s the air we breathe.

In what ways does a Christian worldview continue to be normalized? There are the more obvious examples of major holidays celebrated in the U.S.: Christmas, Easter, Valentine’s Day, Mother’s Day, Columbus Day, Thanksgiving. Some public institutions are opened on Friday and Saturday but closed on Sunday, like post offices, banks, libraries, and government buildings. What event is the calendar based on? Jesus’s birth. Or think of health care facilities in your context. How many of them were started or are maintained by a Christian denomination?

Geography is another example. I live in San Francisco, which is named for a Catholic saint and located on land taken from Ohlone peoples. Nearby is San Mateo, San Carlos, Santa Clara, and San Jose. “The secularization and normalization of Christian influence,” Kivel notes, “may lead us not even to notice the religious roots of geographical names or recognize them as legacies of Christian colonization,” (19).

For Christians and non-Christians alike, Kivel’s book is a call to action, through education and response.

He explains key Christian concepts, like dualism, the cosmic battle between good and evil, the need for salvation, and the idea of there being only one way to God. In each case he shows how these concepts have shaped the Western world at its core. For example, even those who do not identify as Christian are shaped by dualistic thinking. How often do we describe the weather as good or bad, giving it a moral status? Kivel explains, “our binary shorthand lets us avoid actually describing the weather or acknowledging the personal and relative nature of the statements we make,” (41). How much more problematic is this when we judge ourselves or other people using the good/bad moral binary?

Along these lines, Kivel outlines how Christian hegemony continues to undergird U.S. public policy. Take the prison industrial complex for example. It is built on the idea that crime is sin and needs to be judged and punished. “Under this belief system, individuals are completely morally responsible for anything that happens to them” (94) since sins are seen as individual and not systemic or societal. With this foundation it’s no surprise that the legal system lacks the capacity to look at root causes of violence or poverty and more often demonizes criminals as bad people.

Such thinking is further explored through Christian concepts including apocalypse and hope. Who would have thought that the zombie apocalypse craze is rooted in a dominant Christian worldview? This way of thinking tells us that the world will come to a cataclysmic end, which will also be a judgement day. If you are on the wrong side of this judgement, there will be consequences, whether it’s getting attacked by a zombie or burning in hell.

I was challenged by Kivel’s reflections on hope as I thought about my commitment to social change:

“When I am asked about what keeps me hopeful, I hear people asking if it is worth it. If they work to make the world better, will it pay off? I think that the dominant focus on hope and reward in the future leads people to think that if they don’t have personal hope that their efforts will be rewarded, they have the option to give into despair and inaction. It is from a place of tremendous privilege and disconnection to others that one can ask for hope in this sense,” (83).

I remember asking mentors if it’s worth it to be committed to justice, given the odds stacked against our movements. Or I have been asked, “What’s the point if things don’t get better?” Kivel’s thoughts helped me notice the problem with this framework. It’s not about getting a pay off. It’s about living in the present moment and acting in ways that deepen interdependence and strengthen the web of life that connects us all. It’s about creating a just society.

Kivel also takes readers on a historical pilgrimage beginning in the 12th century, when the Roman Church initiated “a series of political and theological projects to centralize and extend its power,” (110). It is a heavy history to read, recognizing the death and destruction that Christian hegemony has caused.

It created the Crusades, which paved the way for the Inquisition in Europe that lasted hundreds of years, demonizing women and Jewish people and all considered “Other.” It forced people to internalize the fear of being personally sinful. Doubt was considered heresy. These concepts continue to be internalized in the Christian psyche.

The Inquisition then paved the way for colonization through the Doctrine of Discovery and Manifest Destiny. Both of these theological ideas, which are still encoded in our legal structures in North America and globally, justified the theft of Indigenous land and resources, and the enslavement of any non-Christians, including African and Native peoples.

It provided the framework for Nazism, the Jewish Holocaust, and Christian Zionism. Although the trauma is not the same, the oppressed and the perpetrators carry centuries of collective trauma because of this legacy and ongoing reality.

I found it helpful that Kivel includes a section on how to resist Christian hegemony. It begins with an overview of Christian resistance, followed by resistance outside Christianity. He encourages Christians to become allies and provides helpful resources along these lines. Both at the end of the book and on his website, christianhegemony.org, Kivel offers guidelines for Christian allies:

- Examine how you have internalized judgements about yourself based on Christian teachings; have you cut yourself off from your body, from natural expressions of your sexuality or spirituality, or from connections to the natural world?

- Respect other people’s sacred places, rituals, sacred objects and culture, and don’t assume you can appropriate them, and

- Avoid excusing hurtful behaviour or policies because of the good intent of their perpetrators; work with others to respectfully hold people accountable for their behaviour (197-198).

For those committed to undoing oppression, and especially those who identify as Christian, this book is a must read. It provides much needed perspective on how Christian dominance is at the root of injustice in the Western world. And at the same time, it empowers Christians to embody their faith in life-giving and anti-hegemonic ways.

For some Christians, challenging these hegemonic realities may feel like an affront to their faith commitments, as if something is being compromised by questioning Christian dominance. Rather than compromise, In the Shadow of the Cross offers liberation from hegemonic expressions of Christianity. It does this by clearly describing how hegemony is manifest, what it’s affects have been, and allowing readers to chose if they want to continue perpetuating it.

A journey of transformation

Recently, when I was asked why I chose to identify with Jesus given my critique of Christian hegemony, I responded in this way:

What draws me to Jesus is the way that, in the diverse stories we have about him, he invited his disciples over and over again to be on the journey of transformation. He challenged them repeatedly to turn away from dominating forms of power and instead choose love and forgiveness and non-violence and grace.

As a member of a minority group persecuted by the Roman empire, Jesus did not use the power of empire to build his movement. Instead, he was killed by that empire because he was seen as such a threat. And, in rising from the dead he proved that death is not the end, that even death cannot stop the vision and reality of the kindom of God. It lives on.

And I resonate with the grace Jesus offers. I know I make mistakes and am tangled up in sinful systems of oppression. I need grace as I continue. I think the way of Jesus has so much to offer, as it sheds the layers of dominating power it has accumulated over the centuries.

May Jesus-followers continue to embody this kindom and challenge hegemony at every turn.