Mending, Thrifting, and Other Acts of Resistance 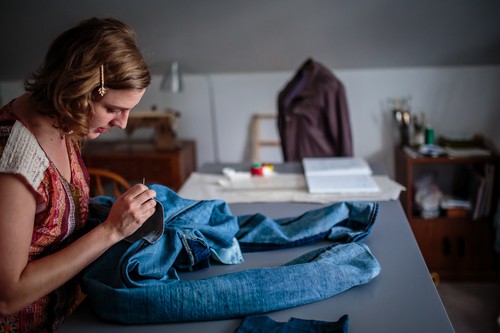 Each time Anna-Marie Janzen thinks of a Joe Fresh shirt or an H&M sweater, the Winnipeg resident pictures the nimble, but poorly-paid fingers sewing together one arm or the collar of hundreds of garments, hour after hour, day after day, month after month.

She thinks about the long shifts these garment industry employees work: the factory conditions, the stress — all for a low-quality product destined to be sold in a department store for $10, a product which will be out of fashion in six weeks and likely rip shortly after that.

Karl Marx described work in such factories as the “alienation of labour.” Workers are disconnected from the product of their labour; they don’t own and can’t use what they make. They are reduced to units of labour, performing small, repetitive actions. Workers are directed to complete these mundane tasks for the least time and pay possible, which in turn generates surplus value for owners. That’s the backbone of the capitalist system.

Anna-Marie Janzen’s goal is simple: to help dismantle the unjust garment industry and the capitalist system too, one person at a time. She’s chipping away at this goal by mending clothes and teaching others how to do the same.

The 29-year-old grew up with two working-class parents who clothed her in her brother’s hand-me-downs or clothes a friend’s child had grown out of. She loved the thrill of looking through garbage bags of new-to-her garments or through racks and racks of treasures at thrift stores. She learned to sew different stitches sitting next to her grandmother in her East Vancouver kitchen. In the interest of full disclosure, Anna-Marie and I grew up together and are good friends.

For the last several years Anna-Marie used these skills to patch holes in jeans or sew up rips, even helping friends make their clothes last longer, including my own. Last year, though, she decided to start a home-based business called Reclaim Mending – a realization of one of those what would you do if you could do anything for the rest of your life, not-so-hypothetical situations.

Now Anna-Marie spends her days interacting with clients in the loft of her working-class-neighbourhood home which she converted to a sewing studio. She talks to the person about what they want, measures their body if the project calls for it, and then has them over again to try on the garment when she’s done. Some days Anna-Marie will do a lot of the same thing, but she makes her own hours and finds the work challenging. It encourages her to be creative and self-motivated. Best of all, it connects her to her clients and the product of her labour.

Her philosophy is to make clothes last longer so people don’t need to go out and buy new things, turning the capitalist enterprise on its head, or at least making a dent in planned obsolescence, one of the pillars of consumer capitalism.

Anna-Marie’s work is not only fixing and altering clothes, coats, and backpacks, she also teaches sewing skills to individuals and groups. Several people have warned her that she could be teaching herself out of a job. That’s kind of the point.

“It’s giving people agency and allowing them to make their own choices about how and when they spend their time and money. If they can fix their jeans themselves, that’s empowering them and hopefully they can pass those skills on to others,” Anna-Marie tells me. “We can slowly reclaim the clothing industry, one person at a time.”

The tools of Anna-Marie’s trade – the sewing machines she works and teaches on – are either inherited (second-, third-, or fourth-hand) or uncovered in thrift stores. She saves old denim to patch pants and acquires a variety of zippers, buttons, needles, patterns, and thread at different thrift stores. Her work relies very little on new things.

Much of her business is done conventionally through the exchange of money for service, but she also barters with friends. Anna-Marie repaired clothes for the photographer who took photos for her website and for the graphic designer who created the logo.

Anna-Marie’s motto is to do no (or as little as possible) harm to herself, others, and the planet. She boycotts big businesses in the fashion world and in other retail spheres and strives to buy mostly fairly traded or local, ethically made products. The business hasn’t always made life easy for her or her partner. The two live primarily on one income – the business is still in its start-up phase – and try to avoid unnecessary spending.

Let’s be honest, though. Not everyone is so privileged to be in this position. It’s not possible for everyone who wants to fight the system to start a business, buy high-priced, fair-trade items, or boycott big businesses (sometimes they pay your bills). But resistance against capitalism can take many forms.

In the 1800s Toronto’s print workers toiled away for 10 or more hours a day for city publishers. In 1872, the Toronto Typographical Union demanded a nine-hour-work day. When their employers refused, workers walked off the job on March 25, 1872. The workers were replaced, but they had so much support from other workers in the city that a crowd of 10,000 people gathered for a rally at Queen’s Park on April 15. The protest committee members were arrested, but a few days later Prime Minister John A. Macdonald introduced the Trade Union Act legalizing and protecting unions.

In recent years, a few hundred fast-food workers in New York City began a conversation around living wage and union rights. The “Fight for $15” movement has grown to include thousands of workers in over 300 cities on six continents.

“For too long, McDonald’s and low-wage employers have made billions of dollars in profit and pushed off costs onto taxpayers, while leaving people like us – the people who do the real work – to struggle to survive. That’s why we strike,” they declare on their website, fightfor15.org.

And change was made. Minimum wage increases to fifteen dollars an hour are legislated to take effect across the states of New York and California, and in cities like Seattle, Portland, and Chicago.

Other initiatives to reduce worker alienation and capitalist exploitation include worker co-operatives and collectives. These are worker-owned and operated, which means workers share in the profits. Members have opportunities for substantial involvement, training, and incentives because they have personal and financial stakes in the business. The Mondragón Cooperative Corporation in Spain is perhaps the best-known association of worker co-operatives. They reported 74,335 employees in 2015. According to the International Co-operative Alliance, France has 21,000 co-operatives which provide over a million jobs. In Kenya, over half the population gets its livelihood from co-operatives. Colombia’s co-ops have more than half a million worker-owners, and the United States’ 30,000 co-operatives provide more than 2 million jobs.

The struggle to resist capitalist exploitation of workers isn’t limited to starting your own business, like Anna-Marie has, or joining a worker collective. Resisting the corporate agenda can also be as simple as educating yourself about the businesses you patronize, buying less, boycotting exploitative corporations, and making time to do and make things yourself.

For Anna-Marie, it’s clear that humans can get by without huge factories cranking out a steady stream of cheap products.

“My systemic goals are to contribute to the fight against capitalism and the garment industry. We don’t need to be a part of it. We can easily survive without it, and these old white guys who run the show know we can survive without it. The more we do without it, the less power capitalism has,” she says. “I’m going to take it down.”

Rachel Bergen is a wannabe radical writer living in an intentional community in the West End of Winnipeg, Manitoba. Time feels slow for her when she plays her guitar and sings.