From Arms and Legs to a Body of Resistance 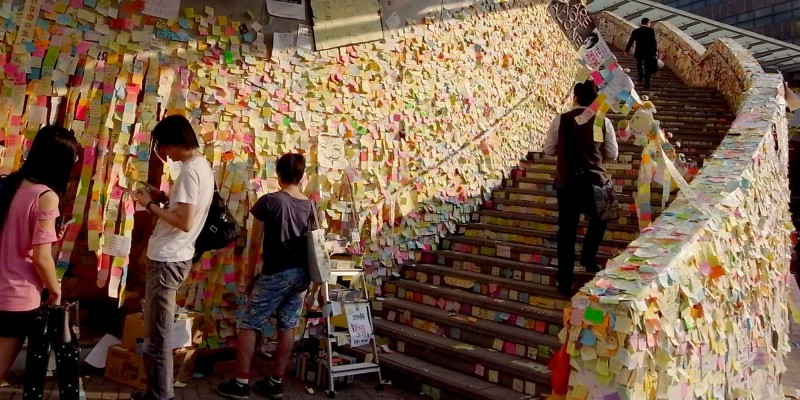 If I mention the bravery of Ukrainians in letters to my friends in prison in Hong Kong, those letters won’t reach them. The historical solidarity between pro-democracy activists in Ukraine and in Hong Kong isn’t lost on the prison officials who censor what prisoners read.

I left Hong Kong, saddled with guilt, and can now safely write about the repression my comrades still face in the Chinese territory. While those dangers can’t directly compare to Ukrainians’ fight against the Russian military, activists in Ukraine and Hong Kong have found much in common over the years. As Arthur Kharytonov, who founded the Free Hong Kong Center in Kyiv, has said:

With Russia and China forming a kind of totalitarian family, Ukraine and Hong Kong need to stand together.

I first heard my democracy-activist friends express reverence for Ukrainians years ago. Answering my question, “Who outside of Hong Kong inspires you?” one said, “I wish we were more like the Ukrainians.”

He described the courage Ukrainians showed in their 2014 Revolution of Dignity against a corrupt Russian-backed government, how as one row of frontline demonstrators in Kyiv fell under the baton blows of the police, another row immediately rushed forward. “That’s what we need in Hong Kong,” my friend said.

At the time, I found the picture he painted far-fetched and chilling – that wasn’t the future I wanted for my city. But that was before 2019, when the riot police started shooting us at pro-democracy rallies. That year, at the height of Hong Kongers’ mass resistance to the Chinese Communist Party, Ukrainians protested at the Chinese Embassy in Kyiv to lend us support. I remember, having just gone home from yet another day of being tear-gassed at a protest, seeing footage of their show of solidarity and crying in gratitude.

The Ukrainian punk band, Dity Inzheneriv, wrote a song for Hong Kongers and Uighurs. Titling the song “Textbooks” – after the refrain, “Our textbooks are made in China.” Songwriter and bassist Serhii Pukhov said:

I want Hong Kongers and Uighurs to at least understand that there are some people in the world who support them.

In 2019, in the subtropical heat of a Hong Kong summer, between marches and street battles with riot police, protesters sat cross-legged in parks and plazas to watch the documentary Winter on Fire: Ukraine’s Fight for Freedom. On a single night, there were 40 screenings.

We were humbled and galvanized by our seemingly fearless counterparts in Ukraine. Hong Kongers hungrily tried to glean lessons from Ukrainians on pressuring the government, building unity despite internal tensions, addressing infiltration, and fighting urban battles.

We looked to Ukrainians for hope because they, just like us, survived on the edges of an impossibly powerful empire. But unlike us, they’d fought for self-determination and won. We borrowed their victory to nourish ourselves.

Quotes from the Ukrainian film became important memes in our movement. The one that gained the most currency, going viral on social media and popping up on post-it notes stuck to cash registers, is itself about solidarity. In this case, solidarity with the dead. A man in fatigues says to the camera:

_Our friends that we’ve lost would not forgive us
If we accepted those terms from the government._

That quote resonated deeply with Hong Kongers because a similar sentiment drove us in 2019. Yes, we were motivated by the goal of achieving democracy – an abstraction. But anyone can tell you that as street battles escalated, what emotionally drove us every day to get back out on the streets was solidarity with those who’d already paid a higher price than we had. The logic went:

We can’t back down now – because of those who’d already died, been injured, imprisoned, or exiled. We needed to do our share, or we’d be betraying our 手足 – a term loosely translated as “comrades” but whose literal meaning reveals much more about how we related to each other: “arms and legs.”

The Ukrainian man in fatigues put what we’d been feeling into a one-sentence principle against which everything was measured.

Now, as Ukrainians defend themselves against the brutal Russian invasion, solidarity rallies for Ukraine spring up around the world. At a recent San Francisco, California protest I attended, a woman held a handmade sign with the coat of arms of the Ukrainian city of Chernihiv and the words:

We nodded at each other through tears, and she asked to take a photo of my sign, which read:

Hong Kongers Stand with Ukraine. One Fight against Tyranny.

She said, “This picture will mean a lot to my grandma back home.”

Among hundreds of Ukrainians, Belarusians, and Russians at the rally, a contingent of us held signs and banners affirming solidarity between Hong Kongers and Ukrainians. We knew these affirmations wouldn’t halt Russia’s tanks and bombs. But they can do something else.

I learned, in the Hong Kong democracy movement, how solidarity from strangers around the world can help sustain people struggling against tyranny. When you’re up against a ruthless authoritarian state, to see that you’re not screaming into a void, that others witness your pain and struggles, is meaningful.

Such emotional solidarity is not a sufficient response to the crisis in Ukraine, or anywhere else. But witnessing is a crucial part of solidarity that helps sustain the long-term action needed. So is accompaniment.

Hong Konger Kaoru Ng flew to Kyiv to cover the war as a citizen journalist. He told CommonsHK that he feels personally connected to the conflict because of the Ukrainian friends he made in 2019, who showed support for Hong Kong. He’s driven by a sense of duty because Ukrainians and Hong Kongers are “one common body of resistance.”

That common body links peoples on the front lines of the global fight between democracy and authoritarianism. In the short term, it remains unclear what could stop Vladimir Putin’s attack on Ukraine without plunging the world into World War III. But going forward, accompaniment has to include dismantling parts of the global economic structure that prop up the regimes of strongmen like Putin and Xi Jinping, whose ambitions go far beyond Ukraine and Hong Kong. The world needs to cure our collective addiction, not only to Russian oil and gas, but also to Chinese cash – cheap Chinese manufacturing and the siren song of the 1.4-billion-strong Chinese consumer market.

Following Putin’s invasion of Ukraine, Hong Kongers climbed the city’s iconic mountain, Lion Rock, to form a human chain in solidarity with Ukraine. This chain is not unlike the human chain dubbed the Hong Kong Way, which was formed in 2019 at the height of the Hong Kong resistance movement. The Hong Kong Way commemorated the 30th anniversary of the Baltic Way, a human chain of over two million people from Soviet-occupied Estonia, Latvia, and Lithuania in 1989. Their fight had taken decades, but the Berlin Wall eventually fell, just weeks after the two-million strong human chain. The collapse of the Soviet Union soon followed.

This is the legacy that we need to carry forward.

Laurie Wen is an activist writing a book about the democracy movement in Hong Kong, her hometown. She loves dogs, flowers, and printmaking. She’s currently planting daikons and helping asylum seekers in San Francisco.

About the photo: In 2019, Hong Kongers created hundreds of “Lennon Walls,” named after an original in Prague, where Czechs drew pro-democracy graffiti while under communist rule. In Hong Kong, we wrote our hopes and demands on pastel Post-It Notes and stuck them on walls all over town.