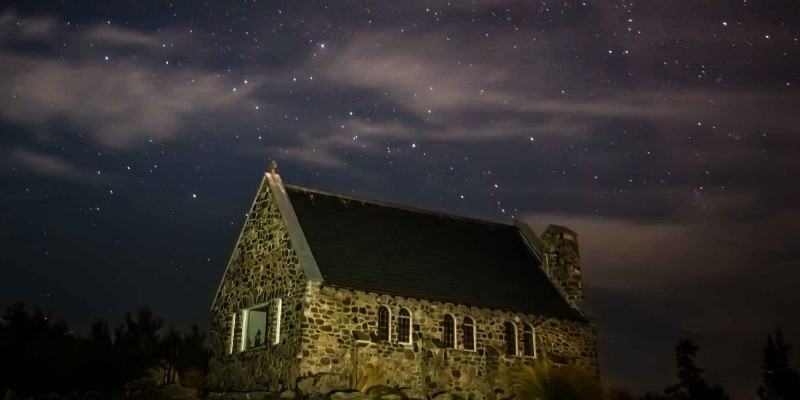 “Under the Stars at the Church of the Good Shepherd,”

My great-great-great grandparents, John and Jane Vercoe, were expecting their first child when they boarded the Artemesia in England.

They were bound for the Wesleyan Methodist mission in New Zealand and Tonga. John was a 27-year-old minister following his uncle, Walter Lawry, who went to Australia in 1818 as the second Methodist minister of New South Wales.

When John and Jane arrived in 1854, Walter was ending an 11-year stint as General Superintendent of missions in New Zealand. This also marked the migration of a generation of my ancestors. Walter had sent letters home to Cornwall describing the mountains and harvests of New Zealand. For John, there was the mission. For the others, there was the land that Walter arranged and the promise of influence
on a new place.

To say arranged feels generous. It’s a word Walter, a passionate administrator, might want me to use. But to me, arranged is passive, almost absolving – it doesn’t ask what boundaries my ancestors reshaped, what beliefs they displaced. It doesn’t acknowledge the Māori who belonged to the land.

Influence gets closer to the truth. Influence is my great-great-great aunt, Emeline, marrying Thomas Russell, who Walter had entrusted with legal affairs and managing funds for the mission. Thomas would form the Bank of New Zealand and become Minister of Colonial Defence. Influence is always one form of marriage or another: a daughter weds the right person, and the family never wants for financing. The missions wed the colonial appetite, and new lands ripen for God and farming alike. Commerce weds the boundary-makers, and soon you have the Land Wars.

Did Walter connect the dots from the mission to his influence in buoying those who would incite the Land Wars? Generations later, I connect those dots. I connect them because I’ve grown skeptical of it in myself: the missionary impulse.

For a long time I had an itch toward a spiritual vocation. There’s a restlessness in me that I’ve been convinced is god’s thumbprint, pressing me toward action. I felt called. I imagined a devoted, singular purpose waited for me. As a child, whenever the restlessness rose, I had one prayer: Use me up. Tell me what to do with all this energy, and I’ll go do it. Dispatch me.

Now, as I engage in the process of meeting my ancestors, I wonder: What safe cover does a calling provide? My ancestors refer to divine providence in their writings – but where is the line between providence and ego? How do you tell the difference?

I thought I was an anomaly, to feel called. But when I found the ministry running through at least 125 years of my family tree, I had to question whether I was receiving a special calling or if I was only responding to ancestral impulse. There’s a part of me trained to look toward the edge of things and ask, What if I went there? There’s a part of me that’s very hungry and gets away with it, as long as I call that hunger God.

More and more, I meet the minister in me as a spiritual inheritance, rather than a calling. To understand the inheritance, I must begin with the stories. I must ask more of them.

John and Jane had the baby shortly after arriving in Tonga. They named her Jennie Hihifo Vercoe. Hihifo, taken from the new place they now called home. A Tongan word meaning west. At first glance, I want it to be honouring, a meeting of two cultures.

I look again and spy another truth. Hihifo. West. In the middle of their firstborn’s name, John and Jane planted a horizon line – the orientation of their so-called calling, an unreachable place.

Emily Stoddard writes poetry and nonfiction. Her debut book of poems, Divination with a Human Heart Attached, is forthcoming (Game Over Books, 2023).