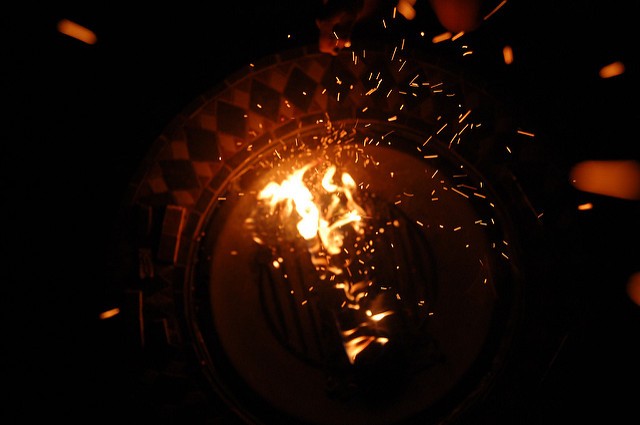 Sparks by the fire Credit: Katelyn Fay (link below)

George had been hoping to brush up on his French with some Haitians in a local shelter while they applied for asylum. But instead, he found himself at St. Luke’s sitting next to Mwibeleca Amuri, a Congolese refugee who had recently resettled in San Diego with his wife and five children.

Amuri was trying desperately to follow along in his Swahili Bible. Thankfully, he spoke French too.

Their friendship meandered awkwardly at first, as most do. George took Amuri to open a bank account, explained that tap water is indeed drinkable (Amuri still doesn’t believe him), brought the family their first Friday-night pizza, and listened to the back-stabbing terrors of the family’s persecution in the Congo and the terrifying banality of their 20-plus years in Tanzanian refugee camps. Despite George’s PhD coursework at Yale in French literature, his administrative work in Cameroon, and his decades back home in the United States as a financial planner, he felt inadequate to the task of helping this definitively needy family. Curiously, amid the family’s travails in which George increasingly shared, his otherwise relaxing retired life felt somehow more whole.

When asked who brought the flowers to her hospital room when Amuri’s wife Eliza gave birth to their daughter Jeanine, Eliza lit up with a smile. “Georgie!”

I am a straight, white, educated, American male citizen from an upper-middle class background–and I’m a priest. I win most of the privilege points in the game our society has fashioned to filter out the voices that may be unsettling, even threatening, to the status quo. Mostly out of a sense of moral self-preservation, I’ve been considering the origins, meanings, obligations, and invitations of social privilege for some 20 years and have become especially stricken by the question of what God has to do with privilege. My journey has included a comfortable San Diego suburb and the elite halls of Stanford, the Quito bus terminal in Ecuador and the jungles of El Salvador, the mountains of rural Oregon and a flat near the White House. All have been a study in the sheer difficulty of passing through the socially-reinforced curtains of our daily cultural norms that serve to keep the few enjoying first class and the rest left out.

On Easter morning, I challenged our modestly-sized congregation situation–comprised of equal parts Sudanese-Americans, newly arrived Congolese refugees, and white folks–to practice the resurrection we were professing. Twenty congregants gathered around the family after worship to brainstorm what we could do together. We raised $1,500 in a matter of minutes, heard from two folks willing to co-sign the lease, and organized teams for the upcoming move. In just three weeks, with the help of many, Amuri’s family moved into a bigger place. Their former landlord, however, was unimpressed with the cockroach situation, and decided to retain all but $300 of their $1,500 security deposit. George was incensed–in fact, we all were–since we had done much of the cleaning. The landlord hadn’t just cheated them–she had cheated and offended us.

In this season of America’s fraying along cultural and racial lines, I am surprised to find that St. Luke’s remains intact, even stronger than ever. It shouldn’t be that way: This majority Sudanese-American congregation had welcomed an influx of white and Congolese attendees within two short years, and both new groups brought different expectations of church with them. More precarious still, our African brothers and sisters are (in general) significantly more conservative on a host of issues, including LGBT inclusion, abortion, and divorce. How were we finding common ground amid the milieu of Trump’s partitioning projects?

Christena Cleveland, a professor at Duke Divinity School and author of Disunity in Christ, writes that friendships across lines of political polarization can form through a shared primary identity in our Christian faith. These friendships were indeed forming at St. Luke’s and were mostly powered by the dormant spiritual deep faith of our Sudanese- and Congolese-American congregants. Many of the white folks had already turned the corner, more or less, on much of organized religion. But these new friendships were awakening a faith inside of them they didn’t know they had.

Fall is the time for fundraising in the church–and I’m particularly troubled by the blindspot of many church leaders in suggesting that God is the source of the material “blessings” of the relatively privileged. I suspect God’s chief blessings to us are the life-sustaining world in which we live, and the relationships with God and each other that help us practice love. Which means all the rest–our membership in prized social categories and the number of zeros in our bank accounts–is more historical and genetic accident than we’d like to think. And certainly not divinely endorsed.

Surely there is a better way to employ the social privilege given randomly to some of us–to use it so that others might be blessed. The Christian story hinges on the radical assertion that God jumps into the fracas of this world in order to befriend, even love, each of us. Indeed, God’s gift of relationships across lines of privilege and prejudice was accomplishing just that: For some, these friendships re-lit long dormant spiritual fires, and in others, material possibilities emerged and afforded a greater thriving in this expensive city.

We sit nervously in small claims court, clutching the eight-page brief that a high-powered, class-action attorney who has been mentoring one of our Congolese families put together for us pro bono. Amuri’s former landlord rejected our call for mediation, and so Amuri walks to the plaintiff’s bench and takes a seat beside George, his translator and his friend. Two years into his American life, however, Amuri speaks for himself, in commendable English, before the judge. He wins hundreds more dollars of his security deposit as we cheer him on from the gallery, a motley crew who has been transformed by this journey with the Amuri family.

We have given his family much, together as a church and individually: furniture, baby clothes, a part-time job, rent and utility subsidies, driving lessons, listening ears. In return, we have found in our relationships with this family a faith and hope that the systems of privilege have a vulnerability that these awkward friendships might begin to dismantle.

Colin Mathewson serves as an Episcopal priest at St. Luke’s North Park in San Diego. In high school, he helped create a Halloween haunted house to raise money to fight iodine deficiency disorder in Africa. A group of his friends (and their parents) spent months on the project and netted $1,500. Thus began Colin’s lifelong dislike of event-based fundraisers.