Underwear with Care: Interview with Laura’s Under There 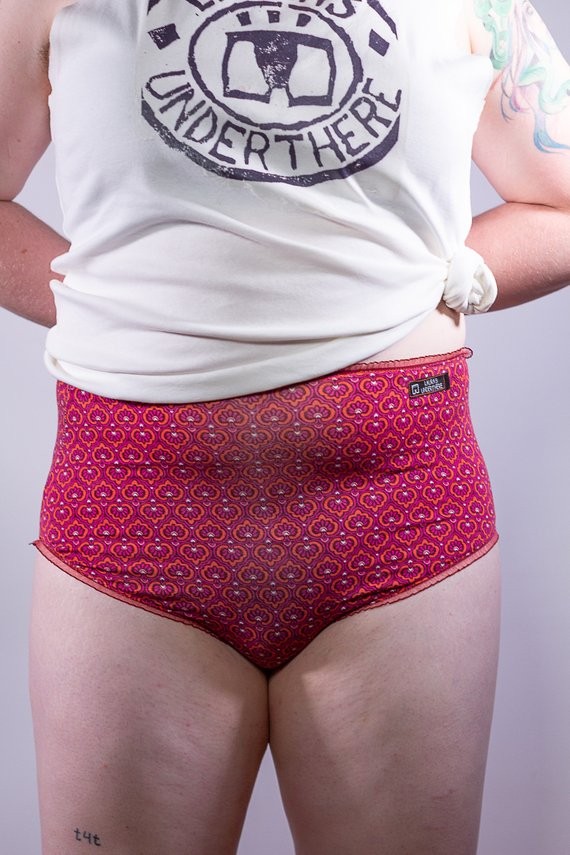 In January, Laura Everett began Laura’s Under There, a craft clothing business that sells upcycled, genderful underwear with a socially minded twist: for each pair she sells, she donates a pair to a person in need.

The origin story for Laura’s Under There began in Laura’s childhood. She has always cared about “the other,” growing up in a foster family with parents who were both involved in social work. However, appearances were also highly prioritized in her home, and Laura wasn’t “born into a personality that wanted to look a certain way, ever.” She was passionate about beauty and image, but not in a restrictive sense, believing “when you feel good, you do good.”

She journeyed from hairdresser to retailer, eventually arriving at the clothing room at a non-profit charity, which felt like a job curated for her. Still, she had this dream about a free clothing store, had been sewing for as long as she could remember, and had a life-long goal of running a craft business so, passionate about clothing the poor, about healing in a holistic sense, she decided on underwear—“underwear was always the thing”—and genderful underwear in particular.

I chatted with Laura about her work, her practice, and her motivations. Here’s an edited transcript of our conversation.

How do you hope “genderful” underwear might add to the conversation on gender identity?

I like the term genderful for lots of reasons. Within indigenous cultures, my understanding is that people are often referred to as genderful instead of genderless. To me, genderful offers a wider understanding of who Creator could be, and who we are.

Where does your inspiration come from in terms of design? Tell us about your process of thrifting/finding fabrics and repurposing them into creative clothing.

Finding stuff that I thought could work as genderful was a bit of a journey. It’s the part of this project is currently the most challenging—that and finding time to sew.

I do it because there is so much stuff in the world. I wanted to make sure I was creating products from stuff that already exists. I’m also doing research into ethical fabrics, but for as long as I can, I will thrift the materials. I’m also hoping people find me, that I’ll build relationships—maybe they work in a garment place in Winnipeg and are getting rid of a bunch of jersey and could email me to come get it.

How does your background working with populations experiencing homelessness inform your current practice?

I’m a huge believer in humanizing people. I want people to realize that we all need dignity. It’s pretty simple to me.

My dream is to talk to agencies and ask what it is that they want. I may not always end up donating the pieces I make and instead buy and give Fruit of the Loom if that’s what community members desire and prefer. I want to work with agencies to give what they really need.

Can you speak to the ways homelessness and gender politics intersect? Poverty and consumerism? Body dysmorphia and environmentalism? Your work intersects with a variety of social spheres!

Well, don’t get me wrong—I love stuff. My partner and I love stuff. And when you have a child, stuff makes life easier. Convenience is something I often think about—the price of convenience.

A lot of my environmentalism has come through my social justice passions. You can’t separate environmental politics from social politics. And I think the issue of people not loving themselves, that’s wrapped up in consumerism.

LGBT folks, young LGBT-identifying people in particular, are the fastest-growing population of people experiencing homelessness. So poverty and gender politics are very connected; gender plays a more significant role on the street—sex work, gangs, violence—than it does in my life, and it’s dangerous to be someone who has an atypical gender experience in those circles. That being said, in some ways you are freer to be who you are, because you have nothing to lose.

It’s interesting that I’m getting feedback from people like, “it’s so crazy what you’re doing” because my motivation is to make underwear for everyone. It makes me a little sad that it’s so revolutionary to just want to help everyone. It’s obviously needed. That part has been really wonderful and exciting to me.

We’re currently living in a climate in Manitoba in which everything is becoming harder for marginalized people because of the current government. And it’s hard to feel like you’re making an impact doing anything. But the thing is—there is space to help. And organizations need help. So I would encourage people to get involved in a way that makes sense for them, and to get to know organizations that are doing work they believe in.